Inspired by the case of Ed and Lorraine Warren; paranormal investigators who came to the aid of  the Perron family, who were experiencing disturbing events in their home, The Conjuring is a spooky exercise in genuine terror in the old-school vein. You won’t be sitting or sleeping soundly once you’ve seen this movie.

In 1971, Carolyn and Roger Perron move into an old farmhouse in Rhode Island with their five daughters.

Yet within days of arrival, unexplainable phenomena beyond any explanation occur. All of the clocks in the house stop at the exact same time, Carolyn is trapped in the basement after hearing noises, she also develops strange bruises with no apparent cause, and one of the girls claims that a force is disturbing her sleep before threatening the family with a warning of death. Terrified, Carolyn and Roger seek out the help of Ed and Lorraine Warren. The couple are paranormal investigators with Ed having studied demonology and Lorraine being a powerful clairvoyant. Ed and Lorraine come to the house and set apart unearthing what the cause of this haunting and evil presence may be. Sure enough, more creepy events ensue for everyone and the evil within the walls refuses to leave. Ed with his knowledge of such things is worried though about Lorraine as while she is a clairvoyant whose senses are immensely powerful, each time she encounters something paranormal and supernatural, it weakens her little by little. Lorraine meanwhile is not the type to just sit around and with steadfast curiosity, she refuses to give up even at the expense of her own well-being. 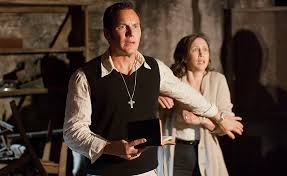 Ed and Lorraine have found some strange things in the past, but this could be the one to top them all. With determination they venture deeper into the history of the old farmhouse in an attempt to bring whatever resides there out. Yet coming up against the shocking evil that is located in the Perron home proves to be the Warren’s hardest and most personal case, that pushes them way beyond anything they have encountered before.

James Wan successful direction takes its cues from the horror movies of old that were all about the terror of the unexplainable and the unexpected. He is excellent at steadily layering on the horror and suspense with admirable restraint, before unleashing full-on terror when you least expect it.

Believe me when I say, the last half of The Conjuring is frightening and so very intense that you won’t have any nails left by the end. Wan is adept at the old phrase that what you don’t see or think you see is a lot more scary than just revealing itself to you. The events depicted are inspired by the findings of Ed and Lorraine, but whether or not you believe the true story angle of The Conjuring is beside the point. The ensuing occurrences of creepiness and spiritual horror are presented without a CGI fanfare that weakens other films of the genre. This approach to the display of events that befall everyone makes the discoveries all the more realistic and even tangible. While the story has one foot in fact, the possibility of the supernatural is also there. This offers a good insight into how the two could overlap with the other, most embodied by the Warren’s themselves who are Catholic yet still believe in the paranormal. There is nary a drop of blood to be found in The Conjuring, which is admirable as it knows the meaning of restraint and how eeriness can be much more effective for scares. I wouldn’t say there is anything shiny or brand new to be found in The Conjuring, yet refreshingly this does not detract from the haunting ambience that the whole piece emits from beginning to end. If I had to choose an area in this film that I was probably most impressed by, it would be the overall visual style and sound effects in The Conjuring, as they neatly balance with the rest of the unnerving movie. The faded visual style gives a worn out feel to the house and events and while being effectively used for ambience, it also constructs a convincing recreation of the 70’s setting to a very high standard. The uneasy score, mixed with the jolts of things that go bump in the night, make sure this film is as haunting as anything in recent horror memory.

Vera Farmiga is the heart of The Conjuring as the sensitive clairvoyant Lorraine Warren.

A softly spoken character whose abilities are extraordinary, Farmiga exhibits a resilience of strength but an underlying vulnerability in the part that is extremely well-acted. She registers concern and hopefulness without a drop of sentimentality with relative ease that all adds up to a strong performance of resolute emotion and significant clout. Backing her up is the sagacious presence of Patrick Wilson as her notable husband Ed. He gives off a well-worn charm and quiet depth in the most subtle of ways that perfectly compliments the work of Farmiga. And I must say, that the two share a very good chemistry and working relationship with the other that is very much in evidence throughout The Conjuring. Lili Taylor is extremely convincing as the terrified mother, who is the worst affected by the haunting of her house and whose emotional frailties become more noticeable as the film progresses. Ron Livingston provides understatement and stifled horror as the husband of the haunted property, who is trying to hold it together to protect his family from whatever it is that wishes them malice and harm.

Marvelously rendered with style and suspense, The Conjuring is a refreshingly old-fashioned horror that jangles the nerves from start to finish and never resorts to cheap tricks to get the scares.