A piercing movie about the iconic Princess Diana as her marriage truly unravels and the scrutiny begins to take a toll, the unexpected and enthralling Spencer is aided by up close direction and a sensational portrayal destined for awards notice by Kristen Stewart.

The film takes place over the Christmas Holidays at Sandringham Estate where the Royal Family gathers. 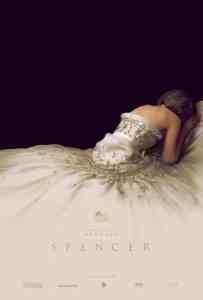 Princess Diana(Kristen Stewart) is late to the proceedings , which is noted by everyone else as something scandalous and controversial. Diana is obviously estranged from her husband Prince Charles(Jack Farthing) and is feeling the emotional strain of feeling on the outside of everything as her marriage continues to crumble . The main things that are keeping her reasonably steady are her two young sons , Prince William and Prince Harry, and her loyal personal dresser Maggie(Sally Hawkins) . We also have Equerry Major Alistair Gregory( Timothy Spall) and Royal Head Chef Darren McGrady(Sean Harris) are trying to in their own way to get through to her, but coming up against some resistance as they are members of the very machine Diana is up against. But it’s not going to easy for the rebel in Diana as mounting tension within  and her mental state beginning to collapse take hold of her. Diana attempts to navigate dangerous terrain as she flouts tradition and must eventually decide on the course of action for her precarious future. The days at prove crucial in her quest for freedom and identity.

Pablo Larraín seems to have a real fascination with and his gifts for cutting through the mystique are very much on show here in Spencer. We never quite know whether any of this actually transpired in the way shown, but it’s intriguing and startling nonetheless. One can see similarities with  Larraín’s other film of Jackie; where they diverge is in how unusual and how disturbingly heightened Spencer is overall, whereas Jackie was largely rooted in a sense of reality. 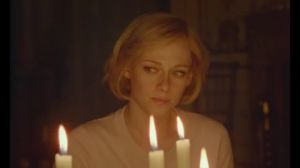 But both movies are equally effective at deconstructing what we think we know about two famous women and are great companion pieces. Spencer is quite different from what you usually think of when something takes influence from a true story. While it does cover some familiar beats, it also deviates in its execution. For example, there are moments in this film that are truly horrifying and veer into psychological torment . In one instance, Diana hallucinates ripping a necklace of pearls that are around her neck and eating them rapidly with her soup. With the camerawork constantly keeping her in tight almost suffocating close up, we are witness to the horrors of a woman trapped in a cage and striving to escape as hallucinations and possibilities arise for Diana. Symbolism is ever present with mentions and allusions to entrapment and a desire to escape to a better time. Also watch for a tense scene between Charles and Diana around a pool table, it’s most certainly memorable as things begin to boil over. A striking and often very haunting score from Jonny Greenwood matches the heightened psychological and visual take on this story . It’s truly a fine weapon in this movie’s artillery and not easily forgettable with its prominent glides up and down in tempo and sense of gloom.

At the heart of Spencer is the sublime work from Kristen Stewart as Princess Diana. Stewart nails the famous mannerisms( tilting of the head, breathy voice and demure grace) while diving deeply into the river of sorrow of a woman clearly on the edge and starting to rebel. 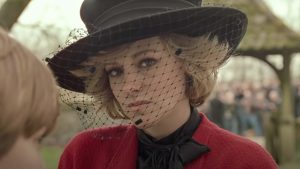 An inner fire, of sarcasm and also candour comes through as her mental state begins to worsen in paranoid fashion and Stewart unearths strength and a painfully human vulnerability that alternate almost simultaneously. I really think that Kristen Stewart should be expecting many an award nomination come the season for it and she thoroughly deserves it for her finest performance to date. The main other people who stand out are Timothy Spall, Sean Harris and Sally Hawkins . The ever impressive has a certain mystery about him as the who it at first appears is not in favour of Diana, but who it transpires has some sage advice for the rebel royal. Spall as always is a class act and is wonderfully cast. Sean Harris, who is always a welcome presence on screen, effectively plays the role of the cook who has sympathy for Diana and genuinely tries to advise her on things , even though he can’t really do much in terms of power or authority. Then we have Sally Hawkins who has an immensely reassuring aura as the royal dresser adept at playing the game and is sometimes quite unexpected in her actions as the film goes on. Jack Farthing his moments but is not really the crucial focus here as effective as he is in only a handful of scenes. The main cast is really good and pretty well assembled, but Spencer is truly a film where Kristen Stewart is the true MVP and what you won’t forget once the credits role. It’s truly her show and she delivers exceptionally.

Brutally intimate, uncompromisingly heightened and daring, Spencer is another triumph from Pablo Larraín and has a simply stellar performance from Kristen Stewart at the heart of it