A slasher from the 80’s, The Slumber Party Massacre delivers on the fun, gore and added use of humour for a quick and gleeful horror.

18-year-old high school senior Trish is planning a slumber party, as her parents will be out-of-town for a time. 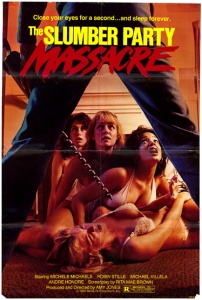 She invites the other girls on the basketball team; Diane, Kim and Jackie. There is also the shy Valerie, who is the new girl in school and not quite in with the others. Trish invites her, but she declines due to the bitchy remarks of snobby Diane. Valerie it so happens lives in the house next door to the party, and tonight she is babysitting her younger sister Courtney, who is more than a bit of a handful at the best of times. As the party next door gets into full swing with smoking, drinking and gossiping, what no one expected is that there is an escaped mad man named Russ Thorn on the loose. He murdered at least five people years before, and now armed with a drill, looks like he’s about to add to that tally. The girls and also the two guys who crash the party are now in the cross hairs of his bloody minded carnage. In the end, Valerie is drawn over to the house due to curiosity and the fact that she suspects something is amiss. It is here when she must take charge and fight Russ Thorn before any more bodies hit the ground as a result of his gory handiwork.

Much has been made of this film being directed by a woman and the screenplay also. A lot of the debate centres on the fact that the horror genre has been called out in the past for what many see as being misogynistic and cruel treatment of women. Yet Amy Holden Jones as director does a very good job at this slightly atypical slasher. For one she has a good eye for camera shots and when to use periods of silence for suspense. 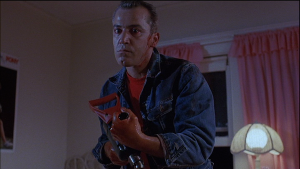 She takes the largely simple and straightforward plot and bumps it up a few notches, with some very good results being gained. Yes the film contains nudity and ladies in skimpy-clothing in the way many would expect from a horror film. But it is something that often appears in slashers and shouldn’t really be held against the film. Jones knows that there is definite humour in the film and brings that out in good stages that alleviate tension with side swipes and black comedy. The script is by far the most intriguing aspect of The Slumber Party Massacre. Originally it was written as a parody of the slasher genre, but when it came to filming, they decided to play it straight. The clash of these opposite tendencies offers up an unusual mix that surprisingly entertains. The humour, whether intentional or unintentional depending on your view-point, is on the money quite a lot of the time. The scene in which Trish, Kim and Jackie sit and wait armed for action and then Jackie suggests eating the pizza that they ordered( which is positioned right next to the deceased pizza man) is strangely hilarious and eye-rolling. 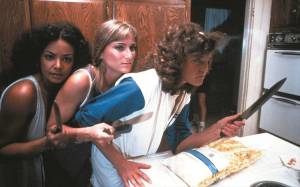 Or the irony of Valerie sat next door watching a horror film and one of the boys frantically knocks at her door, only to be murdered by the driller killer as a character on the television meets a similar outcome. Scenes like this stand out for their satirical nature, that shows that a horror can be fun as well as scary. The choice of a drill as the maniac’s weapon is inventively used for the often gory death scenes( just look at pizza boy with his eyes drilled out of their sockets). Yet it serves another purpose of being a phallic symbol that the girls must combat. Interestingly, at least in my humble opinion, is the fact that many label this film as sexist. If anything, the men who attempt to be macho in the film suffer far more shocking deaths than their female counterparts and by the end, what remains of the ladies know how to dish out violence back against the psycho. Some will take issue anyway with the film, but if you dig deeper there is a lot more to the film than just surface appeal. I’d say The Slumber Party Massacre is more exciting than all out terrifying,  though I don’t mean that as a criticism at all as I appreciate it for doing something else. An organ and synth heavy music score brings out the right notes of horror you would expect.

The cast, particularly many of the ladies, are pretty good in their roles and definitely a cut above some of the acting you see in a horror of this nature. 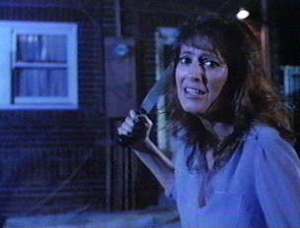 Robin Stille stands out as the quiet Valerie, who only by chance and curiosity ventures to the party of the title to discover that it isn’t a night of pleasant fun and games. I liked the naturalness that Stille projected in Valerie, she was grounded and intelligent which is refreshing in a horror girl. Michael Villella plays the drill wielding psychopath with a dark relish and creepy array of facial expressions. The fact that Villella acts it in a very serious manner only adds to the creepiness of the character who knows how to hack and slash. Another point of interest is that this killer doesn’t wear any sort of mask, which for me makes him more frightening as there is nothing to conceal his evil. Jennifer Meyers often steals what time she is in the film as Valerie’s cheeky and bratty sister, who looks for any excuse to bother her older sister. While these three are the particularly stand outs, the others fair pretty well too in this satiric slasher.

Benefiting from the elements of humour present and some effective sequences of inventive death, The Slumber Party Massacre is an enjoyable way to spend your time if you want a horror to view. It won’t challenge you or make you think, but that’s the point, you are there to have a good time which it provides.