Humanoids from the Deep

A gloriously sleazy and shocking sci-fi/horror, Humanoids from the Deep is not what you’d call subtle or thought-provoking viewing. Yet that isn’t what it promises; it promises a nasty, low-budget ride of creatures, blood and boobs that it delivers a plenty. And you can really feel the stamp of executive producer Roger Corman on this flick.

In the fishing village of Noyo, strange events begin happening . Firstly, a boat carrying many fisherman explodes after capturing what appears to be a giant creature. 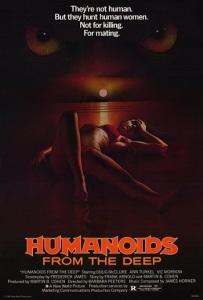 Then all of the dogs in the town are found slain. It all appears to link to a local cannery company introducing a growth hormone to salmon that would help the produce. Jim Hill is a fisherman who occupies a middle ground in the town, as animosity has grown between two parties. On one side there is the Native American population, headed by the young Johnny Eagle, who are opposed to the cannery. On the other side, there is the horribly racist Hank Slattery, who blames the recent rash of horror on Johnny. Yet the creature from the beginning is far from the last and attacks become more prominent, though many don’t live to tell the tale. The assailants are large slimy creatures that emerge from the water.It transpires that the creatures are intent on mating with the women they come across, while eliminating men among the way. Jim decides to take on the threat that is posed to everyone, enlisting the help of the pretty Dr. Susan Drake, a visiting scientist and Johnny. Susan through research discovers that the experimental procedure that she headed is the direct influence on the horrific creatures.  The genetically modified salmon escaped after the experiment and were eaten by a larger fish, mutation began which spawned them into the ravenous and depraved humanoids of the title. Yet with the town about to celebrate the opening of the company with a carnival, horror looms as the creature’s head straight towards them, looking for more women to mate with and more men to slaughter. Now it is up to Jim to save the day as the carnival is about to turn bloody.

What may surprise some is that this exploitative and graphic film is directed by a woman, Barbara Peeters. Bough despite this surprise, she delivers the exciting goods of the film with a crisp pace and plenty of good touches. 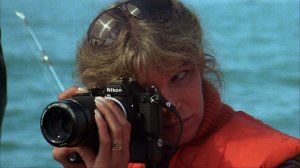 In an interesting footnote it should be stated that Peeters disagreed with Corman about bringing in more nudity and blood than she had featured. This ended up in Corman hiring an uncredited director to feature more scenes of this nature. I have to say that both directing views are actually pretty good, with Peeters bringing the suspense to the picture and the graphic blood and bare breasts showcasing the sleazy B-movie style that the film was clearly going for. It all fulfills the promise of the outrageous title that becomes an eventful monster movie of low-grade but thrillingly exciting proportions. I think with a movie like Humanoids from the Deep, it depends on your tolerance and squirming threshold. 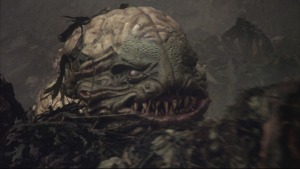 If you want an intelligent film, check those feelings at the door with this one as it is frequently brainless and never takes itself too seriously in the slightest. The creatures are strange to look, but like the rest of Humanoids from the Deep it has that underlying not at all serious quality that makes the, more goofy that outright frightening. An impressively orchestral score is provided by James Horner, that brings a level of class to a film that is the complete opposite.

The cast is competent in roles that don’t require much in the way of development, though they are still fun to watch. 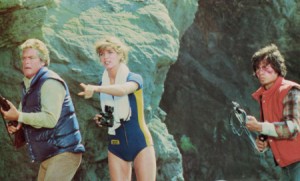 Doug McClure is assured as the Every man hero who decides to take action when everyone else is afraid to do so. He’s the one who keeps the thrills ticking along with his no-nonsense attitude. Ann Turkel is the slightly cold but intelligent scientist, who becomes worried about the repercussions of the creatures on a large-scale. Vic Morrow makes for a nasty bully in the film and plays the part to the hilt. I like Anthony Pena as Johnny as he was a dab hand with a shotgun which comes in extremely handy as the attacks become more frequent and his morals are very much intact.

An almost gleefully nasty yet entertaining creature feature, Humanoids from the Deep is for those who don’t mind scuzzy viewing and movies that don’t require the use of the mind.