A very witty and suspenseful slasher, that is also a mystery in its overtones, April Fool’s Day brings the fun factor to the genre and the fact that it’s a bit different stands it in good stead. 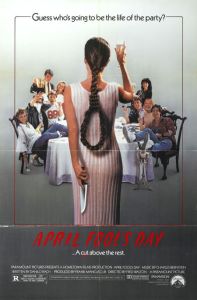 On the way over to her home by ferry, a joke between them unintentionally causes physical harm to the deckhand Buck, who is subsequently hospitalized. Though the group are more than a little shaken by the injury of Buck, they plod in hopes of having a good time on the island. Hostess Muffy immediately sets the playful tone of the weekend with practical jokes for everyone. The party is soon in full swing as everyone gets a little tipsy and some get frisky. As the jokes mount however, hidden secrets from the past are referenced for a few characters which can only spell something bad. Yet while the feeling of the house started as a laugh for everyone in the beginning, darkness takes hold as members of the group go missing and later turn up dead. Just who is the person behind these killings? Does the privileged Muffy have anything to do with the scary turn of events. The terrified teens want to know, if they can live that long that is as the next ferry comes on Monday. Could this be a prank gone way too far or something a lot more sinister? It becomes apparent that not all of them are going to make it until the ferry for the mainland arrives and it’s up to the remaining youths to survive what remains of their time in the house.

Fred Walton brings a workmanlike sense of direction and considerable flair to the material, allowing humour, mystery and horror to converge simultaneously. He establishes the links between the humour of the piece and the creeping horror that will befall all almost from the beginning, when the joking of the kids accidentally causes harm to The trick to getting humour right in horror is knowing when to stop and not overpower the film, which April Fool’s Day does efficiently as it still provides jolts and shocks. While it is a horror/ slasher in many regards, the film masquerades as a whodunnit, with countless references to Agatha Christie.

This approach definitely surprised me as I was expecting a full on horror, but the mystery of it all is actually what makes April Fool’s Day a cut above the rest as it takes an atypical route. The biggest asset in April Fool’s Day’s artillery is the well woven and banter filled script that it has. Written by Danilo Bach, it sets up the jokey and playful atmosphere of the title, while cutting in some crafty suspense. The script makes the characters a likable and funny group who you would like to spend time with, if they were real of course. And it says a lot about the film that when certain characters meet death, you are a bit sad to see them depart. With a title like the one the film has, you definitely expected the unexpected. April Fool’s Day delivers heavily in that area, especially the ending which I did not see coming at all. The only thing I will say is that it is a sly conclusion to a well mounted film.

For a horror, the film is largely sparing on gore, only showing us the aftermath. Some of the make up effects are more than a little dated, but this flaw can be overlooked as the film is more concerned with the mind games than anything else. A wonderfully composed score hits the right balance between tricky humour and creepy terror, with an eerie whistling sound pervading the music with an enigmatic unease. All of these elements distinguish the film as something different in the genre and make April Fool’s Day a film that should be better known, as I feel it is highly underrated when people discuss films in the genre.

A fresh and competent cast perform very well, supplying April Fool’s Day with good performances that are better than some that you glimpse in horror films.

A delightfully off-kilter vibe radiates from Deborah Foreman as the pampered hostess of the weekend. By turns, there is a playfulness and then a kookiness that appears that is pretty mysterious and strange. You get the feeling that there is something not right about Muffy, but thanks to the enigmas created by Deborah Foreman, we are unsure if she is really capable of anything this twisted. Amy Steel stands out as the most resourceful of the teens and the most down to earth one when things get creepy. Rob Olandt is on hand to be the heroic guy of the group and compliments Steel pretty effectively. A lot of the humour comes courtesy of Thomas F. Wilson, who has an infectious laugh and whose antics are comically endearing. The rest of the selected cast are suitably goofy and fun to be around in their own respective ways. And as I said, because they are amiable as characters, you do feel a bit low when they are killed off by the unseen murderer.

A tricky little film with a twist or two here and there, especially in the last half, April Fool’s Day really succeeds on the strength of its cast, direction and above all the excellence of the script. I can give this film a lot of respect for taking a different approach from most and having a lark with it.