A funny, lively science fiction comedy with some nice depth on the nature of compliance and making a difference , Free Guy is thoroughly entertaining and leaves you with a beaming smile.

Guy( Ryan Reynolds)wakes up every day, puts on a blue shirt and heads to work at the bank with a smile on his face. He along with his best friend Buddy(Lil Rel Howery) are all happy and compliant with what they don’t see as an endless cycle.

They are so used to this that the constant crime around them is just another day and event that isn’t important . That is until he meets the kick ass and confidently sexy Molotov Girl (Jodie Comer) , and something changes inside of him as he sees her as the girl of his dreams. Around this time  he realises that he is actually part of a game that he has believed is real for as long as he remembers .This sparks an unexpected change in Guy who instead of committing crime to improve his stance , uses good acts to up his levels as set out in the game . Guy is what is known as and NPC( non-player character ) who is supposed to be in the background but seems to have gained self awareness that wasn’t expected . In the real world , we see that Milly( whose avatar is Molotov Girl) and friend Keys(Joe Keery) are the creators of the game which are being used by the corrupt Antwan(Taika Waititi ). He stole a code from then that is hidden in the game, especially wants justice for this and is using her avatar to do this . is working along with best friend Mouser(Utkarsh Ambudkar), but both are slowly seeing what he’s up too. Once the group discover that Guy has some semblance of humanity and self-awareness, it’s a breakthrough but also dangerous . For the villainous Antwan has other plans for the game as he wants to shut it down and launch another one , angered by the popularity of Guy in the real world and what it will cost his business. So it’s up to Guy, plus the creators/avatars of the game  to stop this shut down before it’s too late and everything is deleted.

Shawn Levy directs with a feeling of fun that’s also infused with a winning sweetness around the outrageous and striking premise . He never loses track of the heart of what’s happening and the journey that Guy goes on.

The self-aware/meta humour is a hoot, with various sequences proving rib tickling humour that’s hard to resist. While a science fiction comedy in the main sense, Free Guy also has a lot to say about how society lives it’s life through technology and also how it’s cool to break away from the routine and mundane to sparks greatness . Free Guy reminded me a little of The Truman Show, but where that film was a brilliantly scathing attack on reality not being what it seemed, Free Guy has more heart and breezy nature in its exploration of a similar subject while retaining an unexpected level of emotional clarity.  The special effects of the video game world are pretty stellar and contribute the overall craziness of what’s going on. I’ll admit to being a little caught off guard at first as to what the film was going for, which I’m sure was what it was going for. I didn’t quite think I was following it right, but once it hit its stride, Free Guy was a very nice film that impressed me and had me involved. Music plays a key part in this film, with Mariah Carey’s jubilant “Fantasy” a particular inspired choice as is “Make Your Own Kind of Music” by Mama Cass Elliot.

A lot of what makes Free Guy a pleasant comedy is the main assembled cast . Utilising his typical sarcasm with a feeling of growing wonder, Ryan Reynolds is a comedic delight . I find that Ryan Reynolds has quite a reassuring presence on screen; you know that he’s going to have fun and transfer that to the audience in a great performance. He just has that humour and heart that’s needed for this film and is a hero we can all relate too. 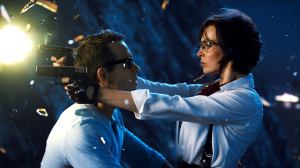 Jodie Comer, who in the last few years has emerged as a big star of exceptional talent, provides alternating humour and warm depth as two characters interlinked. Comer rises to this challenge with ease and captures two contrasting characters ( a kick ass avatar with tough, sex appeal and a nerdy game creator trying to regain what’s hers) wonderfully with humour and plenty of cool attitude. Plus, I dig the burgeoning chemistry between the two and how it develops with sweetness and care. Lil Rel Howery provides a lot of the humour as Guy’s best friend who also comes around to the idea of reality not being what he envisaged. Taika  Waititi is on villain duty as the trying to be hip because he has power . And it’s quickly obvious that Waititi is having fun with the part as his manic energy and sense of crazy antics comes through loud and clear. Joe Keery and Utkarsh Ambudkar are used well as two friends experiencing the ups and downs of the corruption of industry and both trying to make headway with it as well as take down Antwan. It’s safe to say that everyone has a purpose here in the story of Free Guy .

So all in all, Free Guy is wonderful entertainment with a great message about being yourself and discovering worth. Add in the comedy and outrageous science-fiction and the cool cast, and it’s a winner in my bookFree Guy