Hearts are ripped out quite literally in My Bloody Valentine, a highly entertaining horror from the 80’s. A creepy and fun ride is to be had in this slasher that boasts a memorable antagonist and atmosphere.

The mining town of Valentine Bluffs is planning its first Valentine’s dance in twenty years, and all the teens are excited for it. There hasn’t been a dance for so long because of gruesome events all those years ago.

Twenty years earlier, there was also a dance that was in full swing. Two supervisors in the mine were anxious to get there and so they left their jobs early, failing to do the proper check on the methane levels in the mine. A group of miners were still underground at this point and after an explosion, they were all buried there. Weeks later, after much digging, Harry Warden was found to have survived by resorting to cannibalism. He took events even further by butchering the two negligent supervisors and threatening to kill others if Valentine’s Day was ever celebrated again. But the teenagers now think it is no big deal because Warden was placed in a mental asylum and it has been a long time since those events. In the middle of this gang, a love triangle is at work between the returning T.J, Axel and Sarah. Animosity is continuing to grow as the two guys vie for her attentions and come to blows, despite a history of being close friends. Meanwhile, a human heart is sent to the mayor as a warning to stop the dance. And when more events like this occur, he and the local police chief have to entertain the possibility that Harry Warden may be back in town and with revenge in mind. The mayor and chief decide to cancel the dance for fear of what would happen, yet without revealing the grisly information from the gang of teens.

Disgruntled by this, the young ones decide that the mine would be a great place to have the party and completely unaware of what is going on, they head to the mine for drinks, sex and fun. Yet going ahead with this party is not the wisest plan as it fully incurs the wrath of the killer, who has an axe to grind with them all. As the bloodletting continues and slowly gets to the teens( who up until this point had remained oblivious to the terror), horror takes centre stage as they must fight against the maniac who is determined to break their hearts in more ways than one. The teens may have wanted to lose their hearts to someone, but not to this psychopathic figure whose blood lust is unrelenting.

George Mihalka is an impressive director who delves quite well into the gruesome and fun tale with glee. His directorial skills really hit their stride once the action moves to the cavernous mine. He fully uses the set to the best of his ability; making it a claustrophobic and dark space of never-ending tunnels and low ceilings that could well house the killer. The build up and back story of the horrific events twenty years prior are presented in a good fashion that only a few times skirts into slow territory. 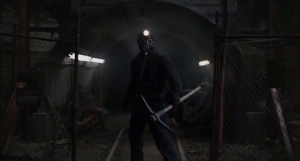 If the first half is the main set up, the last part is the action and that is where My Bloody Valentine exhibits the horror goodies for all to see. The pace is cranked up as the teens in the mine become the targets for the maniac and must discover a way out of the complex structure. Some standout scenes include the remaining teens have to climb up a very large ladder where a nasty surprise awaits them at the top and a girl being engulfed by various items of clothing in the mine before the killer springs to kill her. My Bloody Valentine is famous for giving the censors nightmares upon release due to the violence, which lead to many cuts in the film. Yet even with the cuts, the grisly deaths are still pretty graphic and disquieting as you would expect from a horror film in the best possible way. The fact that for a lot of the time the teens are unaware of the carnage is a good device as they revel in being hedonistic without realising that violence will come their way. Plus there is some novelty value to be seen in these goofy bunch of kids going ahead with the party for the thrills that will soon turn to chills. Kudos must be given to the look of the killer, particularly the creepy mining mask that obscures the voice and highlights his breathing and the sharp pick axe that he uses to slice and dice. A score heavy with a menacing and reverberating percussion is employed at just the right moments to create an aura of tension and the required jolts of horror needed.

The cast is actually pretty good here as we grow to like many of them. Sure many of the are there to be the victims of the killer, but certain ones stand out pretty well. 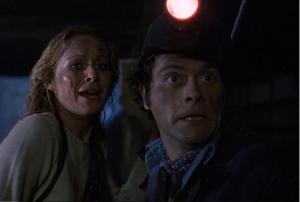 Paul Kelman is very good as the sullen T.J, who has his own troubles to contend with before having to put them aside and fight. Lori Hallier is the girl who the two men are coming to blows over, and while she doesn’t do a lot in the beginning, she becomes a lot more assertive as the horror continues. Neil Affleck plays well of these two as the third point of the dispute, the slightly obnoxious Axel. While the character is a tad grating in his actions, he is pretty solid throughout. Particularly good is when he and T.J have to work together, despite the grievance with the other over Sarah. The same can’t be said of Cynthia Dale, who simply is there to scream as loud as she can as the damsel. Keith Knight and Alf Humphreys round out the main group as the jokers who provide some comic relief among the blood and carnage. Both Don Francks and Larry Reynolds convey a deep sense of worry as both the mayor and the policeman who are scared of the possible return of Harry Warden.

With the 80’s vibe and inventive bloodshed, there is plenty on show in My Bloody Valentine and is an inspired choice for Halloween viewing.