An uplifting look at the human spirit and the resilience of it are brought to the table in The River, which at the time of release was a socially conscious film that looked at the plight of farmers and their lands, as there became a big call for other business. Some of the things in it don’t quite hold up and there are bits of melodrama that sink in, but The River regains its footing and due to the good work from the cast and

Tom and Mae Garvey are married farmers living on their land in Tennessee with their two young children.

Their farm is placed in a precarious position as it lies adjacent to the river, which overflows every so often due to storms. The family struggle along but their unwavering resolve and strength keeps them in tact. Yet tough times are about to arrive in various forms that will test the Garvey’s more than ever before. Recently, the land value has dropped and with the terrible conditions slowly getting worse, many nearby farmers are forced to sell their land. On top of this, slimy land owner Joe Wade has his own plans to flood the family and benefit from the water supply, first trying to buy up all the land that he can. This is something that would put the Garvey family out of a home and a livelihood if it were to go through, but the stoic Tom( whose family has owned the farm for generations) refuses to budge. 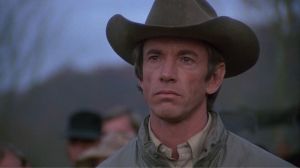 Part of this is due to fact that Joe used to be in love with Mae years before and animosity between the two men thwarted any chance of friendship. But as Tom has run up debt and supplies dwindle, he and Mae are forced to consider the offer. Refusing, Tom in order to get some extra money to keep the farm going, becomes a scab laborer. Difficulties become noticeable as his stubbornness to even consider Wade’s offer weighs heavily on him and his family. Mae tends to the farm, but as driven as she is, begins to see that the tough times are just beginning for everyone and that it is going to take a lot of work to stop the farm from being swept away. Can Tom and Mae make it through the testing times as the river threatens with intent and Wade keeps pushing?

With unfussy yet intimate directing, Mark Rydell gets us to relate to the Garvey’s in their plight. He unearths the way that their livelihood is so important to them, but how a change could also do just that.

The constant wrestling of what they should decide drives a significant part of The River; with Tom standing firm but Mae at least teases the idea to save any more hardship. Now The River is no flawless movie it must be said and a few issues arise. The screenplay, as emotive and soulful as it is, can quickly become a little too black and white when it tries to bring in the politics of business vs the farmer’s resolve. I mean, I can understand the sense of heroism in there, but at times it completely neglects the other side which could have had currency, by becoming a bit melodramatic. The grey areas could have been explored in greater depth as well. Also, at two hours, The River a little too long for its own good and could have been trimmed a bit. All in all, the negative aspects of the film are easily put aside thanks to the heartening tale and sense of hope that emits through even the darker stages. Vilmos Zsigmond brings his assured and striking powers to the cinematography that greatly benefit the movie, by capturing nature as both beautiful and bleak sometimes at the same time.

The deepening of the colour palette brings out the harsher and more dramatically driven areas of the story, yet the glimmering sense of something on the horizon for Tom and Mae remains in subtle fashion. John Williams is on score duties and successfully provides a rousing musical accompaniment to the journey of the Garvey’s as they battle adversity head on.

Mel Gibson does especially well in the role of Tom. Embodying an undying stoic and stubborn quality, he is often a flawed man who is trying to do the right thing. The fact that the character is often his own worst enemy aids the drama of The River and Gibson gets this across, while still generating a hardworking and heartening sympathy for the man. Farming and a sense of honor are in this guy’s blood and the fact that he stands up to fight, while being at odds with a lot of things, is quite inspiring.

But for me the best performance in The River comes from Sissy Spacek. Her part of the farmer’s wife could have easily been relegated to the sidelines and contributed nothing, but the luminous Spacek breathes life and fresh air into Mae. With her expressive face, we glimpse her love for her husband and family as well as her unbending will, that is challenged significantly by the trying hardships endured. But although the character may look quiet and meek, she is the complete opposite. With Spacek in the part, the emotive quota goes up and her natural warmth and depth of talent are displayed in full glory in what is a winning performance of sincerity. Scott Glenn does quite well as the main villain of the piece, though it must be stated that there are times when all he needs is a moustache and an evil laugh, and he’ll become a joke. The character is not written particularly well, but Glenn being the good actor that he is, at least injects a little something else into a cardboard cutout.

A little over dramatic at times and a tad too long, The River nonetheless stands as a beautifully rendered movie, enlivened and given emotional clout by the vibrant visuals and performances, particularly the one from Sissy Spacek.