This is just a quick update for everyone. As of the last few days, I think I’m getting a virus and I feel a bit off colour. I’m telling you this because I may take a few rests from blogging and not review as much in the next few days depending on how I’m feeling. Don’t panic as I’ll still be around. I have enjoyed this month of blogging but am going to rest just a little bit. Who knows, this virus may be gone in the next few days or so. Hope everyone understands.

The Ring is a remake of a well-respected horror so I can understand the trepidation of some people about how successful it would be. They need not have worried because The Ring is an exceptionally well crafted and very unsettling horror with imaginative brush strokes.

The Ring centres around an unusual videotape that comes with a strange and unsettling story.

Filled with bizarre images, it is said that anyone who views it will then receive a phone call, telling the viewer that they will die in seven days. A group of teenagers who viewed the tape while on a trip all turn up dead exactly a week later and at the exact same time. One of the victims was the teenage niece of Rachel Keller, an investigative journalist. While supporting her young son Aidan who was very close with his cousin and is very troubled by it, she becomes curious after she hears someone mention the sinister tape. Being a journalist, she is naturally drawn to delve into the mysterious case. Tracking the whereabouts of her niece she comes to the cabin she stayed at, and it is here that she encounters the mysterious tape. In an attempt to understand the events attributed to the tape, Rachel watches it and sure enough receives the ominous phone call of seven days left. Desperate to uncover what is going on and fearing for her life, she calls upon the services of her ex-boyfriend Noah, who is also the father to Aidan. He is an expert in video technology and is helpful to her cause, though he is very skeptical of the power of the tape.

In her investigation, the images of the tape and strange visions lead her to link it with The Morgan family, in particular a strange young girl named Samara. Yet there is still more to unearth that could spell a different outcome for all party to the tape. Now terrified of whether she can save herself and those closest, Rachel has just seven days to discover the origins of the tape before it is too late for anything else.

Gore Verbinski handles the material with a stylistic yet still accomplished sense of direction. He has a clear eye for pacing and making events not what they seem, deepening the mystery with resplendent assurance and command. While he is very much a visual director, he also taps into the unpredictable and unraveling mystery of the piece rather well. As The Ring boasts a lot more thematic maters than the average horror film, this is something of a given. I loved seeing a horror film that wasn’t mindless but instead intelligent and gripping. Imagery throughout The Ring is pretty haunting and the way that it is explored deeply is another bonus in the supernatural horror of everything.

And by the far the most creepy image is that of Samara, a pale young girl in white dress and flowing black tresses that cover the eyes emerging from a well on the tape. There are some stretches within The Ring that get a bit too drawn out for its own good. But the overall impact and atmosphere paper over these minor cracks in what is still an essentially frightening movie, that gladly has brains as well as a scare factor. The green-blue tint that pervades almost all of the film conjures a surreal aura to everything, which goes a long way in making the audience feel both drawn into the building set of events and cause deep anxiety. This use of a colour palette can’t be praised highly enough as it weaves a creative spell all through The Ring. Hans Zimmer is on music duties and structures a deepening dead that drips from every sonic tweak he infuses into the film.

Naomi Watts is very convincing in the terrified yet steadfast role of Rachel, who finds that the mystery with the tape may just cost her everything if she doesn’t decipher it all quickly. 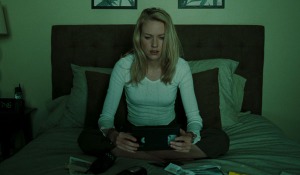 Watts brings out a purposefulness and a confusion that go in hand in hand in making us feel something for the character whose investigation turns deadly and more unsettling. Supporting her is the easy charm and growing nervousness of Martin Henderson as Noah, who scoffs at the idea of a tape having that power but then regretting it big time. It must be said that the level of fear that both Watts and Henderson project is excellently conveyed and pretty potent. David Dorfman plays the scared and unusual child of Rachel’s well, with the drawings and things that he sees becoming integral to the plot. Brian Cox and Jane Alexander add a lot to their roles as people from Samara’s past, who are terrified of the horror that occurred and seems to be spreading once more.

A downright eerie film with a compelling mystery throughout, The Ring is one hell of a spooky film that knows just the right way to have you creeped out as well as getting you to think.