The Man with the Golden Gun

Roger Moore’s second tour of duty as James Bond comes by way of The Man with the Golden Gun. It doesn’t match the heights of Live and Let Die because of its reliance on too much comedy and uneven sense of pace, but it has its moments that are exciting and enjoyable nonetheless, as is to be expected of any Bond movie. It may not be the best that the franchise has to offer, but it does its job.

The energy crisis is at its height and agent 007 is sent by M to locate a Solex Agitator, a powerful device that uses the sun for energy. There is just one hitch in the mission, MI6 has received a golden bullet, engraved with 007 on it.

The only known person to use such a bullet is Francisco Scaramanga, an assassin who charges a million for a kill and is largely unseen by many. M believes that the bullet is a warning that Bond is the next intended target for Scaramanga. Bond, although investigating the Solar crisis, decides to find Scaramanga before he becomes the next victim. Jetting from Macau to Hong Kong and eventually Thailand, Bond discovers that the Solex and Scaramanga are actually linked in an evil plot to harness the world’s solar energy. With the bumbling MI6 agent Mary Goodnight in tow and the help of Scaramanga’s terrified mistress Andrea Anders, Bond is sent into this dangerous game of cat and mouse with his eye on eliminating Scaramanga before it is too late.

As previously mentioned, The Man with the Golden Gun is not the finest Bond film out there. I feel that the writers went a bit overboard on the comedy and lost some of the essence of the previous movies. A good example of this is the car stunt over a rickety bridge that is quite amazing to watch, but marred by the presence of a slide whistle sound effect that detracts from the impact of the stunt. Guy Hamilton lays on the comedy a little too thick with his direction, but at least has some quality action moments and stunning locales to showcase in the typical Bond fashion. The pacing is quite indifferent as well and could have been trimmed a little in parts that drag on. Just as Live and Let Die had incorporated elements of the blaxploitation genre that was popular at the time, Golden Gun decides to get in on the act with countless references to the burgeoning Kung Fu genre. Some of the martial arts scenes are good and well staged, but they eventually become more than a little tiresome. With those negatives out of the way, the positives will now be discussed. The location work is beautiful and the choice of Thailand is a stroke of genius. Scaramanga’s lair is a definite highlight of this, with the island location and breathtaking views.

It makes for an excellent scene in which Scaramanga challenges Bond to an old-fashioned gun duel. John Barry returns for musical duties and provides a lush score with Far Eastern allure and intrigue ever-present. The title song may not be the best, but with Lulu on vocal duties and singing with seductive fervor, it serves its purpose.

Roger Moore is once again on fine form as Bond, playing the role with a definite tongue in cheek quality and filled with some great one liners. He has the charm to burn and charisma a plenty and firmly establishes his idea of Bond. Christopher Lee, with his imposing stature and sinister presence is an ideal adversary for Bond. Playing Scaramanga as a ruthless but utterly charming villain, Lee relishes the part as he toys with Bond and questions his moral standing. Although a gorgeous presence and a stunner in a revealing bikini, Britt Ekland’s role as fellow MI6 agent Mary Goodnight is not the best. 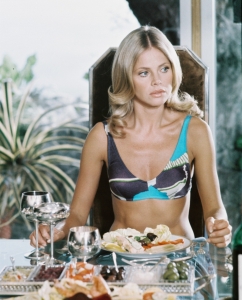 A bumbling and very clumsy helper to Bond, many of her antics act as more of a hindrance than anything else. I will give Britt Ekland some credit in that she does have her funny and charming moments, but the role of Goodnight just isn’t that good or interesting. Maud Adams gets the better Bond girl role in the form of the tragic and vulnerable Andrea and is very emotionally effective in the part. It is through her that Bond traces Scaramanga and we get the sense of loneliness and restriction that Andrea must endure under the influence of Scaramanga. Hervé Villechaize is a hoot as Scaramanga’s pint-sized sidekick Nick Nack who is prone to sly actions. Soon-Tek Oh is not very effective as an agent helping Bond on the mission. The same can be said about bringing back Clifton James as Sheriff Pepper. It is a misstep as he soon becomes a nuisance in the film. Bernard Lee is particularly gruff but witty this time around as Bond’s superior and Lois Maxwell equally charming as Moneypenny. And its good to see Desmond Llewelyn back as Q after his absence in the last movie.

The Man with the Golden Gun is not 007’s finest hour, but it has its moments that can be enjoyed throughout.

22 thoughts on “The Man with the Golden Gun”