It may be something of a conundrum within the Bond community on the opinions of Octopussy, some see it as an effective spy yarn, others see it as too outrageous and too confusing. But for me, I fall into the former category and consider Octopussy a really excellent entry into the series, full of exotic locales and interesting characters. It may be a little convoluted and silly at times, but there is more than enough enjoyment to be had with Octopussy. 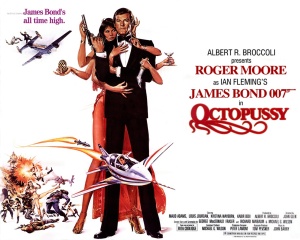 When British agent 009 turns up dead at the British Embassy in Berlin, dressed as a clown and clutching a fake Fabergé egg, MI6 begin to investigate. Bond is assigned with finding the seller of the fake egg and comes across Kamal Khan, an exiled Afghan prince who bids for the real egg at auction. Following him to India, Bond investigates Khan and his association with Russian General Orlov, with the help of fellow agent Vijay. 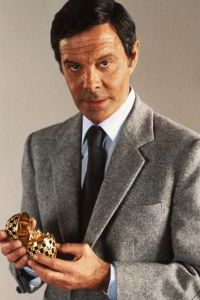 Khan and Orlov have been forging valuable jewels and replacing them with replicas, allowing them to smuggle them into various countries. Orlov is power-crazed and wants the Soviet Union to take back more control over the West, which alarms KGB chief and sometimes helper to the British General Gogol. Collaborating with the two in the diamond smuggling is the mysterious Octopussy, a fabulously wealthy woman who lives in a highly guarded palace on the river, guarded by athletic and dangerous women . Meeting Octopussy, Bond sees that her circus business is being used as the front for the scam. Yet Octopussy is unaware of the more sinister motives of Orlov and Khan and just thinks that they are just smuggling priceless jewels across the border. Orlov plans to detonate a bomb at an American military base in West Germany. He believes that this will cause the US to pull out of Germany and leave it open to Soviet invasion, fulfilling his maniacal scheme. Coming up against Khan’s henchman Gobinda, the lithe Magda and the various foes that stand in his way, Bond teams with Octopussy to stop the nefarious scheme before it is too late and bring down Khan and Orlov in the process.

The first thing to praise in Octopussy is the visuals which are beyond stunning. India, with its colourful saris, opulent palaces and exotic mystique makes for a perfect location for a Bond movie. The production design, especially in Octopussy’s palace is breathtaking to say the least and is done to the highest golden standard there is. John Glen directs with a fun and adventurous quality, that also gives the series its fair share of suspense. Nowhere is this more apparent that in the opening when 009 is chased by knife-wielding twins to his eventual death. Yet in comparison to the subdued and grounded For Your Eyes Only, Octopussy has more of an excitement and fantastical quality to it, which always adds to my personal enjoyment of it. The plot, while very interesting, can become a little complex for its own good, but with stunning action and surroundings, you may hardly notice.

Standout action scenes are Bond being pursued as the prey in a safari, a tense train fight and a chase through the marketplace on tuk tuks. While the humour is kept to some excellent one-liners, some over the top moments do seep into Octopussy, (need I mention Bond swinging from the vines in the jungle a la Tarzan?) John Barry triumphantly returns for musical duties with a sweepingly romantic score, peppered with exotic strings and drifting flutes. Rita Coolidge sings the main song, entitled ‘All Time High’ with conviction and makes it one of the more romantic of the Bond theme songs.

Roger Moore is still as charming as ever as 007, perfectly balancing humour with the necessary action that is thrown in his way in this tangled web of intrigue. Maud Adams, returning to Bond after her role in The Man With the Golden Gun, makes for a formidable and independent Bond girl.

Adams plays the eponymous character as an intelligent businesswoman, who knows her own mind and what she wants. Adams has excellent chemistry with Moore and they really do make a great couple as Bond and Octopussy realize that they are ‘two of a kind’. The late Louis Jourdan exudes suave charisma and villainous glee as Kamal Khan, who is skilled in the art of double-crossing those around him. Khan is such a slimy villain and Jourdan plays him with charm and oily slyness to the hilt. I would like to say here rest in peace Louis Jourdan, you will be certainly be missed. Kristina Wayborn shows off athletic prowess and stunning sexuality as Magda, a member of Octopussy’s women who acts as the linchpin between Khan and Octopussy. Kabir Bedi is intimidating and frightening as the loyal henchman Gobinda, while Steven Berkoff clearly relishes the theatrical role as the unhinged General Orlov. Tennis pro Vijay Amritraj makes for a likable ally to Bond in this exotic adventure. We have a new M in the form of Robert Brown, who while never going to rival the impression left by Bernard Lee, is suitable for the role of the gruff boss of Bond. Desmond Llewelyn supplies Q with an eye-rolling and confounded humour as Bond wrecks more of his effective gadgets in the line of duty. Walter Gotell returns as General Gogol, who this time is worried about Orlov’s delusions of the future. Unfortunately Lois Maxwell isn’t given enough to do this time around as secretary Moneypenny.

Apart from the sometimes long-winded plot and dips into silliness, Octopussy stands as an exciting and enthralling Bond movie.

The Man with the Golden Gun

Roger Moore’s second tour of duty as James Bond comes by way of The Man with the Golden Gun. It doesn’t match the heights of Live and Let Die because of its reliance on too much comedy and uneven sense of pace, but it has its moments that are exciting and enjoyable nonetheless, as is to be expected of any Bond movie. It may not be the best that the franchise has to offer, but it does its job.

The energy crisis is at its height and agent 007 is sent by M to locate a Solex Agitator, a powerful device that uses the sun for energy. There is just one hitch in the mission, MI6 has received a golden bullet, engraved with 007 on it. 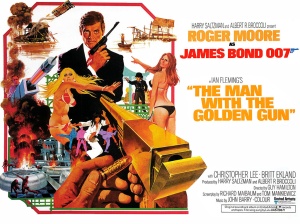 The only known person to use such a bullet is Francisco Scaramanga, an assassin who charges a million for a kill and is largely unseen by many. M believes that the bullet is a warning that Bond is the next intended target for Scaramanga. Bond, although investigating the Solar crisis, decides to find Scaramanga before he becomes the next victim. Jetting from Macau to Hong Kong and eventually Thailand, Bond discovers that the Solex and Scaramanga are actually linked in an evil plot to harness the world’s solar energy. With the bumbling MI6 agent Mary Goodnight in tow and the help of Scaramanga’s terrified mistress Andrea Anders, Bond is sent into this dangerous game of cat and mouse with his eye on eliminating Scaramanga before it is too late.

As previously mentioned, The Man with the Golden Gun is not the finest Bond film out there. I feel that the writers went a bit overboard on the comedy and lost some of the essence of the previous movies. A good example of this is the car stunt over a rickety bridge that is quite amazing to watch, but marred by the presence of a slide whistle sound effect that detracts from the impact of the stunt. Guy Hamilton lays on the comedy a little too thick with his direction, but at least has some quality action moments and stunning locales to showcase in the typical Bond fashion. The pacing is quite indifferent as well and could have been trimmed a little in parts that drag on. Just as Live and Let Die had incorporated elements of the blaxploitation genre that was popular at the time, Golden Gun decides to get in on the act with countless references to the burgeoning Kung Fu genre. Some of the martial arts scenes are good and well staged, but they eventually become more than a little tiresome. With those negatives out of the way, the positives will now be discussed. The location work is beautiful and the choice of Thailand is a stroke of genius. Scaramanga’s lair is a definite highlight of this, with the island location and breathtaking views.

It makes for an excellent scene in which Scaramanga challenges Bond to an old-fashioned gun duel. John Barry returns for musical duties and provides a lush score with Far Eastern allure and intrigue ever-present. The title song may not be the best, but with Lulu on vocal duties and singing with seductive fervor, it serves its purpose.

Roger Moore is once again on fine form as Bond, playing the role with a definite tongue in cheek quality and filled with some great one liners. He has the charm to burn and charisma a plenty and firmly establishes his idea of Bond. Christopher Lee, with his imposing stature and sinister presence is an ideal adversary for Bond. Playing Scaramanga as a ruthless but utterly charming villain, Lee relishes the part as he toys with Bond and questions his moral standing. Although a gorgeous presence and a stunner in a revealing bikini, Britt Ekland’s role as fellow MI6 agent Mary Goodnight is not the best.

A bumbling and very clumsy helper to Bond, many of her antics act as more of a hindrance than anything else. I will give Britt Ekland some credit in that she does have her funny and charming moments, but the role of Goodnight just isn’t that good or interesting. Maud Adams gets the better Bond girl role in the form of the tragic and vulnerable Andrea and is very emotionally effective in the part. It is through her that Bond traces Scaramanga and we get the sense of loneliness and restriction that Andrea must endure under the influence of Scaramanga. Hervé Villechaize is a hoot as Scaramanga’s pint-sized sidekick Nick Nack who is prone to sly actions. Soon-Tek Oh is not very effective as an agent helping Bond on the mission. The same can be said about bringing back Clifton James as Sheriff Pepper. It is a misstep as he soon becomes a nuisance in the film. Bernard Lee is particularly gruff but witty this time around as Bond’s superior and Lois Maxwell equally charming as Moneypenny. And its good to see Desmond Llewelyn back as Q after his absence in the last movie.

The Man with the Golden Gun is not 007’s finest hour, but it has its moments that can be enjoyed throughout.