After Sean Connery signed off once again from the role of 007 in Diamonds Are Forever, the role was subsequently recast. The part was filled by Roger Moore, who brought a more debonair and charming air to the role of 007. Live and Let Die is his first outing as Bond and a successful one at that, a breath of fresh air after the underwhelming previous movie. With Moore now in role, the world of Bond is still as exciting and thrilling as it always has been with a few tricks along the way.

This time we have Bond investigating the deaths of three of his fellow agents. All three where looking into the affairs of political president of a small Caribbean island,Dr. Kananga and a known drugs lord named Mr. Big. Bond is sent to New York, where he encounters Mr. Big as well as Kananga.

Piecing the plan together, Bond deduces that they are one in the same. Kananga plans to flood the American market with two tons of heroin and earn millions in the process, he hides his fields of opium on his island and has it heavily guarded under the guise of voodoo master Baron Samedi. Kananga also uses the virginal fortune-teller Solitaire to his advantage. As long as she remains a virgin, she will have the power of foresight. But after a night of passion with Bond, Solitaire finds her life in danger. Bond’s attempts to stop Kananga’s plan send him from the slums of New York to the bayous of New Orleans as he comes up against the crime lord and the powers of voodoo in an exciting eighth entry into the Bond series.

What is interesting upon viewing Live and Let Die is the influences of other genres that it has. It takes many cues from the blaxploitation genre that was popular in the 70’s and many a gangster film. 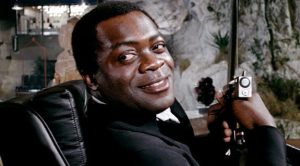 This gives Live and Let Die more of an edge, rather than having a world domination plot it settles for a thrilling and somewhat gritty plot of drug smuggling with the nefarious Kananga at the centre of the scheme. Elements of the horror genre abound in Live and Let Die, primarily in the form of Baron Samedi and the use of voodoo as a backdrop, with tarot cards, human sacrifices and creepy symbolism a plenty. Guy Hamilton regains his confidence again and after the misstep of Diamonds, delivers a more assured and action-packed outing for 007. The action is the main highlight of the film, with a chase on speedboats through the bayou a compelling example of this. For the first time in the Bond series history, John Barry does not provide a score. This task falls to George Martin, who does a commendable job of balancing the sounds of exciting action with the dark undercurrent of the mystical. The amazing title songs, performed by Paul McCartney and Wings, is one of the best songs for a Bond movie with its shifts in tempo, devilish drums and rocking guitars. The song compliments the dark title sequence of gorgeous girls covered in tribal paint, skulls on fire and clawing hands.

Filling the shoes of 007 for the first time is Roger Moore. He brings more charm to the role, but also a certain ruthlessness as well. Moore’s incarnation is very much the more humorous Bond than Connery(especially with that one eyebrow raise and razor-sharp wit), yet he does have serious moments in which he also excels.Moore certainly makes an impression on his Bond debut. Yaphet Kotto makes for an excellent villain in the form of the two-faced Kananga, his sinister smile and outbursts of anger are particularly effective. 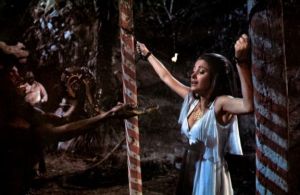 The beautiful Jane Seymour inhabits the role of Solitaire with a guarded and naive sensitivity, as we watch her gradually slip from under the domineering influence of Kananga into the willing arms of Bond. David Hedison portrays the most charismatic Felix Leiter in the series, and Julius Harris as the hook handed Tee Hee and Geoffrey Holder as Baron Samedi are fine as two of Kananga’s many henchman. Gloria Hendry is saddled with an uninteresting role as a rogue CIA agent employed by Kananga, whilst Clifton James has a laugh as the redneck sheriff caught up in the speedboat chase. Once again Bernard Lee and Lois Maxwell are given scant material as M and Moneypenny. And it is really annoying that Desmond Llewelyn is absent as Q.

Live and Let Die is an exciting and intriguing Bond movie with loads of action, adventure and enjoyment that is the perfect way to introduce Roger Moore as the new James Bond.