Wes Craven’s seminal horror movie of the 90’s that rejuvenated the genre, Scream is a fresh, darkly funny and suspenseful movie that is still a real blast to watch.

The film begins with blonde bombshell Casey Becker answering the phone whilst preparing to watch a slasher flick. The caller soon turns threatening after flirting with her and begins to taunt her into playing a game of horror movie trivia. Her boyfriend is tied up outside and is subsequently gutted when Casey gets an answer wrong. The terrified girl is then stalked by the masked caller who eventually stabs her to death and hangs her body from a tree. 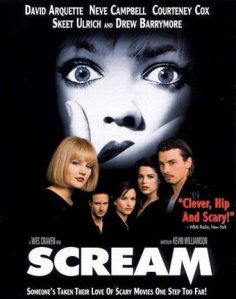 Meanwhile, teenager Sidney Prescott is trying to adjust to life with the upcoming anniversary of her mother’s brutal rape and murder. Sidney is also contending with her boyfriend Billy who wants intimacy with her but can’t seem to get close. Sidney’s other friends include the sassy Tatum, movie nerd Randy and goofy Stu. The slaying of Casey and her boyfriend becomes big news in the town of Woodsboro( covered in the news by resident bitch and anchorwoman Gale Weathers and investigated by the not so bright Dewey, a cop and brother of Tatum) with everyone suspecting who the twisted killer could be. All the students are sent home for fear of their safety with a curfew put in place. It soon becomes clear that this killer has watched one too many scary movies as more grisly murders occur and Sidney is seemingly the main target. With the body count rising, will the terrified Sidney be able to survive the encroaching bloodbath? In-jokes to many slasher flicks, inventive and gory deaths and credible performances make Scream a refreshingly excellent exercise in the horror genre.

Wes Craven directs with a flair for the material and perfectly manages to balance the grim and knowing humour with scenes of blood-soaked savagery. The endless list of inventive deaths also breathes fresh life into the generic tropes of the genre, with the chilling opening a clear highlight of terror and suspense. The biggest asset that raises Scream above many horror films is the self-aware script that lampoons conventions and gives the proceedings a jolt of off-kilter humour. The scene in which Randy explains the rules about surviving in a horror movie to other students at a drunken party is both a witty commentary on the repeated formulas of horror movies and a subversive nod to the seen it all attitudes of movie-loving teenagers. Scream also gives us a genuinely creepy villain in the form of Ghostface. With his twisted love of horror movies, chilling games and menacing voice, he is a common fixture on Halloween night and has been imitated countless times in so many movies. Marco Beltrami provides Scream with a spine-chilling score of haunting voices and sinister synths.

A splendid cast encompass their roles with wit and believability.

Neve Campbell is emotionally convincing in the role of the terrorized Sidney, who goes from vulnerable girl to strong and resourceful survivor as she is galvanised into fighting back against her masked attacker. Playing the role with quiet conviction and buried strength, Campbell makes for a great heroine of horror that you can root for. Courteney Cox makes a fabulous impression as the ruthless and bitchy Gale, who will do just about anything for a scoop or her name in lights. David Arquette contributes goofy charm to the part of Dewey, who is often clueless on matters of the case. Jamie Kennedy is a hoot as the movie geek Randy, imbuing the part with a nervous and manic energy while Rose McGowan is feisty and sexy as Sidney’s best friend Tatum. Skeet Ulrich is mysterious and slightly menacing as Sidney’s boyfriend Billy and Matthew Lillard is great at playing the slightly hyper Stu. Drew Barrymore makes the opening to Scream memorable as the blonde lovely tormented and eventually butchered by Ghostface.

Hip, witty and above all scary, Scream is a horror movie that shouldn’t be missed.