Wes Craven takes to the air for this suspenseful little thriller that is lean, mean and nail-biting stuff. Red Eye, with many a Hitchcockian element to it, doesn’t aspire to be something brand spanking new; its main objective is to thrill and that’s what it does.

Lisa Reisert is a hotel manager whose life is all about dealing with tough customers and complaints. 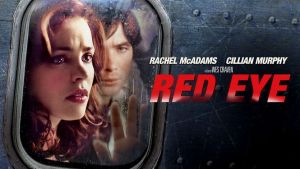 We pick up with her in Dallas, where she has just attended the funeral of her Grandmother. She’s not the biggest fan of flying, but is going to catch the red-eye flight back to Miami. Unfortunately, her flight is delayed and she has to wait around for a little while. It’s here that she meets the polite and handsome Jackson Ripper, who engages in friendly talk with her. When the flight is ready, they are happy and bemused to see that they are sitting next to each other on the plane. Though he keeps Lisa calm, there’s something not quite right about Jackson which becomes abundantly clear to us and her. What started as flirting and charming conversation soon turns to something very sinister as the plane takes off. Jackson admits to being part of a terrorist organisation that needs Lisa’s expertise in a deadly plan. You see the Deputy Secretary of Homeland Security is staying in the hotel Lisa works in and the people Jackson works for are planning an elaborate assassination for him. They just need Lisa to switch his room for it to be successful. As leverage to ensure she takes part, Jackson informs the terrified Lisa that her father will be killed if his demands aren’t met. Faced with precious time that is ticking away, Lisa digs into her resolve in order to not buckle under the shock that befalls her. But just how long can she hold the evil and ruthless Jackson off before death begins to occur?

Red Eye benefits from the sure hand of Wes Craven in the directing chair. Having been one of the kings of the horror genre, his skills at inducing tension and terror are utilized here in this tightly compact suspense thriller. He gets over a real claustrophobia and paranoia that seeps into every frame, especially the main chunk that is airborne and the most unnerving.

Red Eye isn’t aiming for immense originality or to be a game changing suspense movie; its most concerned with offering up something nail-biting and with more than a couple of jolts of unpredictability. economical running time makes sure that we are on the edge of our seats and no flab is seen leaking in Red Eye. The last half hour goes a bit overboard, but the build up and the tightness of most of it makes it easy to ignore and still a well constructed thriller with excitement and a whole lot of tension. The pacing is mainly where the movie is at, cleverly getting to the point after a short but bracing warm up before a white-knuckle intensity covers it splendidly. The mid-air game of sinister cat and mouse is sustained through effectively up close camerawork and  Marco Beltrami, who previously scored the haunting music for Craven’s Scream, is ace at filtering an electronic pulse into Red Eye. He starts with little drops of suspense, before cranking up the action and drama for something quickening and growing in volume.

Rachel McAdams and Cillian Murphy are the main players in this movie and they are talented performers.

McAdams is a kind of actress who keeps things grounded and her part sympathetic and resourceful. She’s no screaming victim and though under duress, she makes her part one of both believable smarts and vulnerability. Cillian Murphy, with his intense stare and icy blue eyes, is superbly cast as the seemingly charming man who is anything but. Nastiness is his middle name but you can also sense some form of desperation to get his job done no matter what from the always watchable Murphy. Together, both are engaged in a deadly hunter and prey routine that is extremely entertaining. Although his appearance is rather sporadic, it’s always good to see Brian Cox in a movie and he is worth the watch no matter how small the role.

A tense and efficient thriller, Red Eye shows Wes Craven directing with great economy and style to give us a cracking suspense thriller.