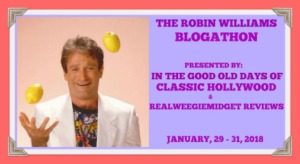 The quite fabulous and ever so lovely Gill and splendid Crystal asked me to partake in a blogathon to honour the talents of Robin Williams. I simply couldn’t refuse this offer as I’m such a huge fan of Williams. For my choice, I decided to review the wonderful Disney flick Aladdin.

A joyous and energetic take on Arabian Nights from Disney, Aladdin is chock full of stuff to enjoy and be a part of.

In the streets of Agrabah, Aladdin is a young urchin who along with his monkey sidekick Abu, must steal to survive. 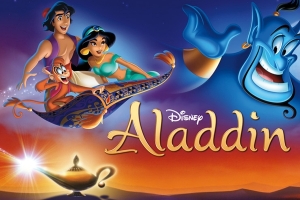 Although he must rob, he is an inherently decent person just attempting to make it from one day to the next. His life is about to get a whole lot more eventful very soon. He meets Jasmine; a spirited girl who is actually the daughter of the Sultan and therefore a Princess. She has run away from home because according to a law, she must be married to a prince very soon. So far, she doesn’t like any of the suitors that have been selected for her. She feels stifled by royal protocol and wishes to marry for love. On their brief meeting, Aladdin falls in love with her, but fate has other plans.  Also involved is the villainous adviser Jafar, who wants to have power and never-ending domination over everything. He has identified that Aladdin is the person who can get him what he wants. That would be a magic lamp hidden within a magical cave. After imprisoning Aladdin, Jafar disguises himself as someone else to lure him to the place in the sands that is known as the Cave of Wonders. Inside, Aladdin and Abu accidentally upset the order of things and end up trapped. Upon rubbing the lamp, an energetic and fast-talking Genie emerges, ensuring Aladdin that he has three wishes that he can grant. There are limitations to what he can wish for, though Genie and Aladdin develop a friendship and Aladdin promises Genie that he will set him free as a final wish. Helping them out the cave and with Genie’s help, Aladdin masquerades as a famous prince in order to woo Jasmine and ultimately stop Jafar in his evil tracks.

From the opening of swirling sands, Aladdin looks gorgeous and magical. The vivid colours used in the animations are something to marvel at as Aladdin finds himself in an adventure and fantasy. The visuals are all in place for us to admire as well as many other key ingredients that make Aladdin a great movie. The briskness of pace bring out the fun right from the start, never letting any flab or dull moments sink in because of its fastness. The humour and adventure appeal to both grown-ups and children because it covers a wide range of styles. This is especially prominent once Genie enters the picture and all the great pop culture references and nods are in full abundance. The music is another ace high point of Aladdin with many numbers standing out. 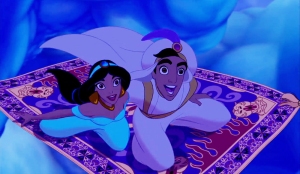 The sublime and romantic ‘A Whole New World’ is a great match for the visuals of Aladdin and Jasmine taking a magic carpet ride, while the bombastic ‘Prince Ali’ and ‘Friend Like Me’ are a perfect summation of Genie and his antics.

The assembled voice actors do extremely well with the characters they have and are all well-suited. Scott Weinger has the right amount of fun and charisma for the title character, which goes a long way with how much we like Aladdin and his journey. But its Robin Williams and his voicing of Genie that truly makes Aladdin that something to treasure. 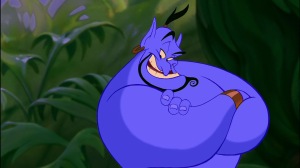 His endless impressions, vocal acrobatics and wildfire delivery are scene-stealing in a completely amazing way that is very much to Williams’ style of comedy. Genie is a character who brings an already great movie into the levels of excellence it achieves. With Williams the man behind it, it is quite impossible to not laugh along with Genie as he helps shape Aladdin with his wisdom and zany antics. It simply wouldn’t be the same movie if Williams wasn’t a part of it. Linda Larkin has a sweet but strong voice that is just perfect for Jasmine, while Jonathan Freeman is appropriately slimy and nasty as the main villain of Jafar. His voice is very snake-like, which comes in handy with such a foul and evil character. Just as Aladdin has a sidekick in Abu, Jafar has the loud-mouthed parrot of Iago, voiced with relish by Gilbert Gottfried.

A bundle of hip fun for all ages, Aladdin is dazzling movie making from the animation, music and voice acting. But best of all, it’s a showcase for the talents of Robin Williams and a special one at that.