The Texas Chainsaw Massacre remains to this day a seminal and controversial work in horror. Loosely inspired by crimes of Ed Gein, with an iconic villain in the form of Leatherface and the age-old formula of what we don’t see will scare us even more, Tobe Hooper’s movie has lost none of its original and frightening impact.

Sally Hardesty is travelling with her wheelchair bound brother Franklin and friends Jerry, Kirk and Pam to investigate the grave of her grandfather, which has supposedly been vandalised along with other graves. 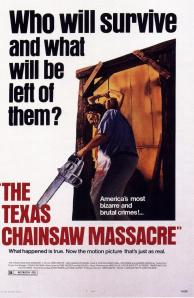 Along the way they pick up a jittery hitchhiker who begins to menace them by cutting his wrist and then slicing at poor Franklin’s arm. After kicking him out and recovering from the bizarre incident, this they decide to take a look at her old family’s house which is nearby. Whilst looking round the surrounding areas, they discover another house. But this house isn’t filled with the most welcoming hosts. A deranged cannibalistic family of slaughterhouse workers reside in the house, headed by the scary Leatherface, who wears a mask of human skin and is adept at using his chainsaw to slaughter unsuspecting victims. As terror increases and the group is picked off mercilessly, it is left to Sally to attempt to survive this savage attack and make it out in one piece.

The first thing to praise in this horror classic is the visual style. The film was made on a low-budget and the picture has a grainy look to it. Strangely, this look is supremely effective in capturing the horrifying events  that befall Sally and her friends as it adds a documentary style immediacy to the film and puts us in the grimy surroundings that the characters stumble upon .The camerawork is dizzying and makes terrifying use of extreme close-ups to express the fear and madness that seem to run hand in hand. The strange score is sparse but eerie, as the sounds of machinery and bristling cymbals combine to give the film a doom-laden pulse.

As I previously mentioned, The Texas Chainsaw Massacre is low on the blood count, but this doesn’t make it any less chilling than it is. By not showing us the brutal slayings in graphic detail, the film lets our imaginations run wild with possibilities of the deaths that occur. Whereas the remakes and sequels of this have revelled in bloodshed and gore, none of them can beat the clammy and grimy impact of the original. This atmosphere of dread is upheld by Tobe Hooper with great certainty throughout and the final half hour is a heart-pounding fight for your life event, which is the cinematic equivalent of a waking nightmare.

Scenes that linger in the memory include the menacing hitchhiker who becomes more sinister and strange as he recalls working at the slaughterhouse, Pam falling into the living room of the scary house and finding human remains fashioned into furniture and Sally nighttime chase with Leatherface. The sight of the monstrous Leatherface is still frightening and chilling after all these years and his appearance has influenced many a horror villain over the years.

Marilyn Burns does a great job of portraying fear in these unusual and savage circumstances, particularly in the scene in which she encounters the family at dinner. Paul A. Partain is suitably worried and nervous as the wheelchair bound Franklin. Edwin Neal is jittery and unstable as the creepy hitchhiker who troubles the group. And not forgetting Gunnar Hansen as Leatherface, his tall frame and barely audible dialogue adding to the horrifying impact of the character.

Mercilessly tense, horrifying and atmospheric, The Texas Chainsaw Massacre is still a chilling entry into the horror genre.