A potentially intriguing premise descends into confusion and disjointed genre melding in The Forgotten, which despite the talent included comes out as a weak and unmemorable movie. Only for a strong turn from Julianne Moore and a suitably eerie score, The Forgotten remains partly watchable.

Telly Paretta is trying to survive the grief of losing her young son Sam in a plane crash fourteen months earlier. No matter how hard she tries, she is haunted by the pain of loss and sadness at losing her beloved son. Her husband Jim thinks it is time that she moves on, but Telly thinks otherwise and continues to cling to the memories of her little boy who was tragically taken from her all those months ago.

Then one day Telly wakes up and the strangest thing has happened. The photographs of her and her son are gone. All the tapes of him are blank. And everyone who Telly comes into contact with, even her husband, tells her that they have never heard of her son and that she is delusional. Her psychiatrist Dr Munce explains that Telly has fabricated these memories of ever having a son. Everything that she has experienced up to this point has been a dream or fantasy, according to everyone surrounding her. Bewildered and shocked, Telly knows that she had a son and wants to prove that she is not slipping into madness, despite everyone around her questioning that her boy ever existed. Telly soon finds something of an ally in Ash Correll, who she says had a daughter who died in the same crash. At first, the miserable alcoholic dismisses her claims and won’t listen, but he comes to see that she is right about the whole thing. Now with Telly and Ash searching for the truth, they find mysterious government agents on their tail. And that’s not all, a strange and unexplained force seems to be after them as well. What will be unearthed in Telly’s quest for answers?

Director Joseph Ruben knows how to direct a thriller, but none of that skill is evident here as he tries to straddle the stands of psychological thriller and sci-fi into one. The whole tone of the film suffers and is hellishly disjointed, coming off as a directionless thriller and an X Files reject . This is a shame because the opening sets up what could have been an interesting story, that is wasted and falls short in almost every category there is.

The whole basis of a mother searching for her son could have provided a lot of deep emotion here, yet The Forgotten squanders most of the impact. The Forgotten aims to be unpredictable and unexpected, but the script is weak and as the story plods on, it becomes to ludicrous to take seriously. The visuals of moody blue and grey are actually quite well done, but can’t make up for the shortcomings of the film. An ominous and melancholy score, with an underlying electronic edge, adds some much-needed suspense and eeriness to the proceedings.

The saving grace of The Forgotten is the ever-reliable and excellent Julianne Moore. 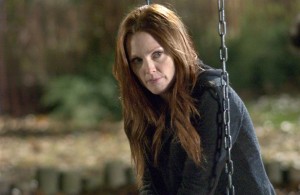 Rising above the multitude of flaws in the story, she invests Telly with emotional clarity and tenacity in her attempts to prove she is right and hopefully discover the truth. Moore is the reason to watch this film as she shines in the part and brings emotive depth and conviction to a hollow film. Unfortunately, none of the other parts are interesting or particularly well-written. Dominic West, Gary Sinise, Alfre Woodard, Linus Roache and Anthony Edwards all have great talent, but the material they are given to work with is abysmal so none of them can make any impact in such sketchy roles.

So except for some striking visuals, melancholy score and Julianne Moore’s performance, The Forgotten should be exactly what the title says.