With Charmed Season 4 being the darker continuation of Season 3, I think the producers of Charmed decided to lighten the show up a bit more with this season. Needless to say, some of it works and some of it doesn’t. Season 5 is a mixed bag, but I don’t think it’s as bad as many fans make it out to be, which is thanks to the great cast and chemistry. Warning, spoilers will be following in this review.

In this eventful season, we firstly have Piper(Holly Marie Combs) going through her pregnancy with her first child.

In the beginning, she is scared that she won’t be a good mother and occasionally panics about bringing a child into a life with supernatural threat. Eventually she manages to gain control and still take on her responsibility of a Charmed One and head of the family. She gives birth to a baby boy named Wyatt, in tribute to her husband Leo(Brian Krause). It was originally thought that the child would be a girl because of the tradition in the family, but Wyatt is no ordinary child. 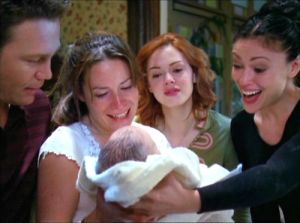 He has the powers of witchcraft from his mother and Whitelighter abilities from his father. However with Wyatt’s birth, comes the attempts from various demons to send him down the path of evil. Leo must also contend with the constant calling of The Elders, which begins to put a big strain on his union with Piper. Meanwhile, Phoebe(Alyssa Milano) is using her career as an advice columnist to take her mind of her demonic ex-husband Cole(Julian McMahon). Unfortunately while in the wasteland, Cole acquired many powers and found a way to return. While Phoebe still has feelings for him, she knows the relationship will never work and wants to move on with her life once and for all. 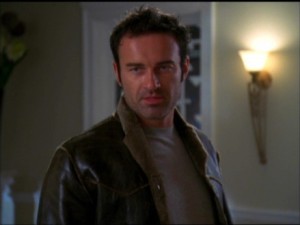 Cole does not take lightly to this and makes many attempts to win her back, all while slipping into madness because of the powers he’s absorbed. Their relationship comes to an explosive end in the 100th episode, in which Cole is vanquished for good. And we have Paige(Rose McGowan) quitting her job as a social worker and taking on the studies of the craft to show her worth. On a witch kick, reminiscent of Prue, Paige emerges as a valuable member of the trio with power and compassion, when in the beginning she wasn’t sure of her place in the magical scheme of things. Yet even with the threat of Cole eliminated, there’s still multitudes of demons and warlocks all looking to kill The Charmed Ones. As personal feelings, supernatural threat and tough decisions abound, the girls must face these challenges head on.

I can understand the producers wanting to lighten the mood a little after the darkness of Season 4, but at times they go a bit too far. The influx of magical beings that the girls come into contact with becomes a bit too wacky with Leprechauns and nymphs needing their help in some questionable and ineffective episodes. Yet when the humour does succeed, it does make the season very enjoyable.

Watching as Piper’s unborn baby plays various tricks on her powers is quite amusing as are some of the things the girls are transformed into, including latex wearing super heroines, a mermaid and in the finale Greek Goddesses. Saying this, Season 5 is not as bad as many make it out to be. Sure it may pale in comparison with the excellent last season, but it still retains excitement and creativity. If more time was taken to flesh out a few more ideas and have a bit more consistency, it would have been truly amazing. Yet we do have some standout episodes that include; the girls being trapped in versions of fairy tales, them protecting a gypsy tribe from a vision-stealing hunter, a wicked crone stealing their sense in an attempt to turn Wyatt evil and Cole altering the universe to his own design, but paying the price in the end.

Thankfully, Season 5 doesn’t go completely overboard with the humour and at least ties up some loose ends with emotional clarity. Chief among these is the end of Phoebe and Cole’s relationship. This was the right time to wrap up the story line and give it a bittersweet goodbye. 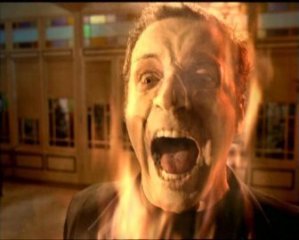 Cole may try to win Phoebe back, but can’t deny the evil that has always been within him. It’s sad to see Cole go because he’s such a great character, but at least he has a great farewell to boot. Watching the relationship on its emotional ride has been well done, but this was the right time to tie the story up once and for all. The introduction of Wyatt gives the show a lot of possibilities and the challenge of Piper and Leo’s marriage which eventually becomes estranged is movingly observed. I think because of the over reliance on the light this season, people tend to forget that there are some very emotional moments here, chief of all Cole’s vanquish and Leo becoming an Elder, which in turn means he must part with Piper.

The emotional separation between Piper and Leo is a real tearjerker if ever there was one and if you don’t at least cry a single tear, you don’t have a heart. Plus, the intriguing first appearance of Chris, the Whitelighter sent from the future who is very mysterious and will soon play an integral role in the show. Season 5 may not be the best season of Charmed, but at least the emotional investment and ties are still as moving as ever and believable.

The cast is on great form, as we’ve grown with these characters and their traits. Holly Marie Combs continues to impress as Piper, investing her with deep emotions and tough strength. Having always been the most maternal, having a baby gives Piper that extra kick of steely protectiveness of her family and those closest to her. The exploration of her relationship with Leo as they part is movingly observed, mainly due to the sheer amount of emotion that Combs puts into the sad scene. Alyssa Milano shines as Phoebe, who just wants to move on with her life after Cole. She gains an added sense of liberation when this happens. I liked how their relationship played out as it was obvious they both deeply loved one another, but somehow it just wasn’t meant to be. It’s also nice to see Phoebe become involved with a normal guy for once, in this case Jason, the owner of the paper Phoebe works at. After all the pain Phoebe has endured, she at least deserves another shot at love and Milano makes her lovable and mature at the same time. And this is the season where I think Paige really blossoms. As played by the excellent Rose McGowan, Paige is smart, quick-witted and kooky.

McGowan makes Paige a joy to watch as she embraces her gifts and becomes a fully fledged witch, while also adhering to Whitelighter duties. This is the season where Paige finally feels like a part of the family after her initial reluctance. Brian Krause is given more to do as Leo and infuses him with the wrestling of decision between his calling and his family. Julian McMahon bows out of Charmed in style by portraying Cole as inherently despicable but also a very tragic character who has made his mark on the show. Dorian Gregory is seen way too infrequently this season as Darryl. This is a shame as I do find his character quite funny and endearing in the scheme of things.

Despite some noticeable weaknesses during this season’s run, Season 5 of Charmed is still entertaining and enjoyable.

I just got awarded the Blogger Recognition Award. This is the first time that this honor has passed my way courtesy of Kat, who runs an utterly fabulous blog and like me is a huge fan of Charmed. Thanks for the award Kat.

So to complete this award I must write a paragraph on how I got started on my blog and also a piece of advice to people who have just started their own blogs.

I began writing this blog three years ago as something for a college project. We were told we had to think of something that spoke about us. At first, I must admit I was hesitant to do this as I had no idea of what to do with a blog. Yet little by little, I began to find my voice that I managed to put down in words of my movie reviews and other posts. I had always been interesting in movies, so with this new thing to do, I decided to carry it on, even passed my college days. So something that started as a simple project soon became my pride and joy and the way I have met so many amazing bloggers and thoughts. I am now glad that I continued to create work for this blog as it has become such an integral part of my life and one I don’t think I could live without.

To anyone that is starting a blog, listen closely. You should write from the heart and do whatever comes naturally to you. It is your blog, so voice your thoughts with passion and clarity. Don’t be afraid to take risks in your writing, it is really beneficial. If you want to build a community of followers, scout around blogs and leave comments. This is an excellent way to be introduced to fellow like-minded bloggers of similar interests. And above all, don’t think that no one is going to read your stuff. There is always someone out there who will and this should give you the confidence to continue.

I have decided to nominate three blogs for the award. I don’t think I could possibly choose fifteen.

Once again, a big thanks to Kat for handing me this award. You rock so much Kat. I really enjoyed sharing the origins of my blog.