A somewhat spicy romantic comedy, No Strings Attached is a film that surprised me as I didn’t expect to enjoy it as much as I did. It’s thoroughly predictable, but a bit of added naughtiness than most films of the genre and good chemistry from the leads marks it as an entertaining and raunchy comedy.

Emma Kurtzman and Adam Franklin have known each other since they met at summer camp as teenagers and struck up something of a friendship.

Over the following years, they encounter each other a few times but each is busy. Emma becomes a busy doctor and Adam a production assistant for a TV show. They finally run into each other again under amusing circumstances when Adam gets very drunk(after discovering his seedy dad has been bedding his ex-girlfriend) and passes out in Emma’s apartment. After helping him get himself together, Emma sees that there is a spark between them and the two have sex. Although they felt a spark, Emma is reluctant to pursue any relationship as she is not good at getting close to others, her work keeps her almost always busy and she has a fear of becoming deeply involved with someone else. Emma then comes up with an idea that could work out for the both of them; they will have a purely sexual relationship that doesn’t have the intrusion of emotions. 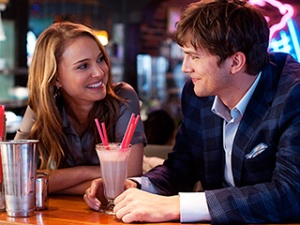 They can each see other people without feeling jealous or expecting anything deeper from the pact. It starts out well enough, with the promise of lusty encounters with no guilt thrilling. But inevitably, both Emma and Adam begin to develop romantic inclinations towards each other, which causes all manner of confusion as it goes against their initial agreement to not have emotional intimacy.

Ivan Reitman contributes unfussy and observant direction that takes a funny examination of love and sex and doesn’t feel the need to pander to a  cloying demographic by sugar-coating any of the naughtiness that is featured.

A winning script is an excellent inclusion to No Strings Attached as it delves into sex and romance with a frankness that is different to most romantic comedies that are overly cute and saccharine. Some of it doesn’t escape the predictable formula of the genre and it can try to be a bit overly lewd, but for the majority it stays on the right side of ribald. I must say that there were so many parts of the film that had me laughing out loud due to the awkwardness and ensuing complications of Emma and Adam realising that there is more to their union than just sex. All manner of hilarity presents itself in No Strings Attached as their relationship deepens unexpectedly, culminating in quite a few rib-tickling sequences.

Natalie Portman further cements her versatility as an actress by showing off some excellent comic timing. She plays Emma as brittle, self-assured yet with a guarded quality that shows quite a lot of depth as the character must confront love for possibly the first time.

The depth, humour and honesty Portman brings adds a refreshing dimension to the film as she isn’t just the typical girl who is usually found in a romantic comedy. Ashton Kutcher has the part of Adam, and he has the necessary goofiness and decency to play the part and make the character likable. The two stars have very believable chemistry that retains a slightly awkward but delightfully endearing heart to it and leads to all sorts of naughty mischief and unexpected consequences. An amusing array of supporting characters are played well by the rest of the cast. Kevin Kline had me howling laughing as the irresponsible dad, trying to be young again by working out and doing drugs so he can be a cool dude. A sassy Greta Gerwig is good as Emma’s roommate who can see that the arrangement between the two principal characters will not work out well. 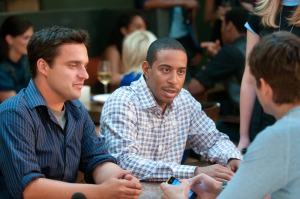 Side-splitting humour is provided by Jake Johnson and Ludacris as Adam’s mates, whose advice on love and sex are both ribald and hysterical. Lake Bell is quite funny as a co-worker of Adam’s who obviously likes him, but is prone to incessant chatter that over analyzes things too much. The part is funny, though slightly grating in the scheme of things.

You’ll probably the guess the outcome of the film long before it ends and some of the vulgarity can be a bit overused, yet No Strings Attached presents an amusing look at the complexities of trying to separate sexual relations from those of the heart. Honestly, this movie genuinely did a number on me and exceeded my expectations I had going into it.