A steamy and sinister erotic-thriller/drama, Poison Ivy is not the best of its kind, but is raised up a few notches by the presence of a seductive Drew Barrymore and a better than expected story. It can’t quite escape the B-movie trappings, but has enough things to bring it to a level of credit, no matter how flawed.

Sylvie Cooper is a wise cracking loner, who has a fractured relationship with both her parents and finds any way to push the boundaries with them. She most wants someone to spend time with who understands her personality. 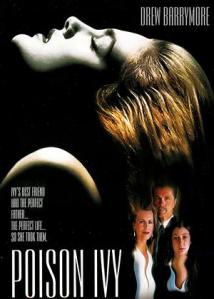 Her wish is seemingly granted when she meets Ivy; an entrancing blonde with a wild way about her. The alluring Ivy is at the school on a scholarship and hasn’t come from the happiest background. Both somewhat loners, Sylvie and Ivy bond and form a friendship. Sylvie invites Ivy to stay over in her large house, which becomes something of a permanent thing. Ivy loves spending time at Sylvie’s house and the security she believes it has. Ironically, Sylvie enjoys Ivy’s company because she is different and wild. Sylvie’s mother Georgie is dying of emphysema, while her dad Darryl is a worn out television presenter whose seen better days. Both parents take a liking to the vivacious Ivy; Georgie sees something of herself in the young, rebellious girl, while Darryl begins to develop salacious feelings for her, brought on by Ivy’s come hither wiles. Yet just being with family is not enough for Ivy, she wants to actually be a part of it. And through manipulative ways such as impressively seducing Darryl and charming Georgie, she sets her sights on her goal and raises her dark campaign insidiously.

Sylvie grows suspicious of Ivy and her motives, but as she’s probably the only friend she has, clings to the only person she’s ever really related to in life. Soon Ivy’s plan gathers momentum and threatens to destroy Sylvie and her mother, in the hopes of gaining the family she never had and being in control.

Katt Shea has a stylish approach to the often lurid source material, yet finds other areas of character attention that are unexpected. There is a definitely a thriller element to Poison Ivy, similar to other films of the time that involved a home being engulfed by the pernicious influence of an outsider. While that is there, a drama is mainly prevalent in quite a lot of the movie, raising it up a few bars on the level of appreciation. A gorgeous lighting scheme contributes greatly to the mood at hand, one of darkness and sexuality in hues of moody blue and slithering gold.

If there is anything you can’t deny about Poison Ivy( even though it is far from amazing) it’s that it turns up the heat without quite becoming x-rated. I mean just take the scene where Ivy seduces Darryl on the hood of his car as rain pours down. It’s sexy stuff that feels steamy yet not overly tawdry. As risible and melodramatic as some of the script gets, it is compensated for by the aura and attention its two protagonists. Both Sylvie and Ivy have their own issues and feelings of alienation to different degrees, which makes both relatable, even when Ivy’s darkness reveals itself. They are both mixed up so it isn’t really a surprise that they find some common ground, until obsession and a desire to usurp corrupts everything. I could have done with Poison Ivy being a bit longer than it’s relatively short running time. It did feel more than a tad rushed at various instances, with events lunging out rather than unfolding. Expansion may have been necessary to the film, yet for what it is, it does it with some style. A generously sinister music score of strings and saxophone is sultry and mysterious, much like the eponymous bad girl who takes centre stage.

The biggest asset to Poison Ivy is Drew Barrymore in the title role. At the time of the film, Barrymore was returning to acting after a much publicized battle with drugs and alcohol .

Still aged only 17 and now clean, she managed to rebound thanks to this film and others that followed, paving the way for the bankable star we have today. Drew Barrymore really plays the seductive but not entirely unsympathetic Ivy excellently well; displaying an agreeable charm, hidden menace and touches of yearning. You genuinely buy the seemingly good girl/disturbed vixen act that Ivy has as it is so convincing, yet as played by Barrymore, the Lolita sex appeal comes out and a feeling of being mixed up and abandoned is ever-present. Ivy may be sinister and extremely manipulative in her actions, but she isn’t quite a one-dimensional monster. This is down to Barrymore, whose contradictions of allure, amiability and childlike craving are ideal for this part. Sara Gilbert is also solid in conveying awkwardness, snarky cynicism and a pang of alienation. Her playing of Sylvie as wanting to belong is another part of the film that keeps it from being just another trashy erotic film, mainly because it feels very natural and unaffected. Tom Skerritt and Cheryl Ladd are cast in the supporting parts of Sylvie’s unsuspecting parents, whose lives are wrecked by the consequences of Ivy’s actions . While neither role requires much of a dramatic stretch, both stars bring their game to the roles of philandering husband and dying, embittered mother.