An unusual romantic drama that has enough touches to set it apart from others, despite some shortcomings, Angel Eyes comes out as surprisingly engaging and heartening, in no small part due to the acting work from the main cast.

Sharon Pogue is a Chicago cop who is as tough as they come when patrolling the dangerous streets.

Yet beneath her armour like facade, she is actually vulnerable, embittered and somewhat broken. Most of this stems from tensions with her family, in particular the fact that she had her abusive father arrested years before for beating her mother. Ever since, this has driven a wedge between Sharon and her mother, brother Larry and father as they saw what she did as a betrayal. Also receiving news that her parents are renewing their vows and that brother Larry has also been abusive towards his own wife, Sharon is completely at a loss and attempts to channel her anger into her work, though it often spills over. Meanwhile, a quiet young man known simply as Catch wanders the streets doing good deeds for people without any clear reason. Catch comes into contact with Sharon at a crucial moment for both of them. Sharon is chasing down a thug and is nearly killed, only for Catch to step in and save her life. Grateful to the stranger for saving her life, Sharon attempts to get to know Catch as a feeling of romance begins to rise.

Yet every time she thinks she’s getting closer to understanding him, Catch pulls away and shuts her out, hiding a mysterious past that he won’t speak of. The same can be seen within Sharon who while wanting him to open up, still needs to exorcise her own baggage to be truly honest. The hitch is, can a relationship ever truly blossom if neither of them will open up and let feelings in? Can by baring their souls they finally connect and benefit from the other?

There is a sensitivity to Angel Eyes that slowly reels you in and while some it gets a bit pat and filled with schmaltz, Luis Mandoki( through clear-eyed and assured direction) still keeps us watching and adds some good touches of mystery to proceedings, particularly in regarding Catch’s mysterious past. Although a romantic drama, when Angel Eyes begins it plays with audience expectations of what it could be and teases many things. A thriller, a cop drama or something more fantastical are all references, before it settles into an unconventional romance. Something about the way the film does this and wrong foots you impressed me as it kept it more than a little fresh.

The two main characters are very well-developed and shown to be damaged and riddled with psychological scars and torment that is mutual between them. The question is not so much will they get together, it’s more a case of will they open up and face their demons, creating something a little different from the formulaic romantic dramas that are often released. It must be said that the script has a few shortcomings, with some dialogue being a bit forced and unnecessary, but thankfully the heart of Angel Eyes covers up these cracks and embellish some of the flawed parts of the movie. Ambiance is created through a Marco Beltrami score that sprinkles events with a dark undertone yet still filled with an emerging hope.

At the centre of Angel Eyes there is a surprisingly effective and moving performance from Jennifer Lopez. 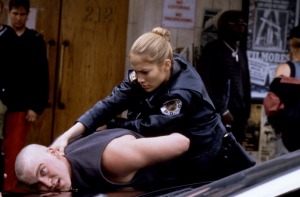 I’ve said it in the past that for all the bad movies she has made, when given the right material, she can really show her talent and in Angel Eyes, her talent is on display portraying the shut off Sharon. Exuding a steely and fierce attitude when in company of others, but showcasing a vulnerable and bruised pain, Jennifer Lopez gets us to sympathise with Sharon. As Sharon’s feelings for Catch grow, Lopez delves into how she wants to open up and now more about him, but must also work through her own demons along the way. If you have only ever thought of Jennifer Lopez as a glamorous pop star, then prepare to be taken by surprise by her natural and mature performance here. Creating a tentative chemistry with her is Jim Caviezel, who nails the haunted mystery of Catch and his good Samaritan tendencies without becoming overly saintly. Through his eyes, Caviezel says so much yet keeps a distance to shroud him in secrecy as Sharon attempts to break through his high walls. Jeremy Sisto does his best with the role of Sharon’s abusive brother who appears to be following in his fathers footsteps, while Terrence Howard is wasted more than a little as one of Sharon’s police friends. Then again, it’s the main characters that matter and with good work from the main two, Angel Eyes gets by.

Although there are clichéd moments and some let downs within it, Angel Eyes benefits from sincere performances from the leads and an added touch of depth and some mystery that makes it watchable and something a bit different.