The oh so talented and superb Meryl Streep turns 67 today and what a career she has had, and still has as she continues to make stellar movies. I think its well established by now that she is one of the most gifted and engaging actresses on the planet. I mean just looking through her filmography speaks for itself showing her versatility and strength. I mean is there anything Meryl Streep can’t do? She’s done drama, comedy and even action. She is a master of burying herself into the roles she chooses and a dab hand at essaying a variety of accents. When I see Streep on the screen, she delivers every time without fail. It is impossible not to be impressed and bowled over by her commitment to the roles she takes and how she so embodies the parts seamlessly So I wish her a glorious birthday and want to say how wonderful it is to watch her on screen.

A delightful and funny romantic comedy with supernatural fantasy added to it, Bell, Book and Candle may be a trifle dated in the context of today, yet with a game cast, lovely lighting and magic it makes the most of a fluffy yet enchanting premise.

It’s Christmas time in Greenwich Village and we pick up with Gillian( mainly known to many as Gil) Holroyd, who works in a gallery of African art.

Secretly, she is a witch, but keeps the information to herself and goes about her days, usually conversing with her dotty Aunt Queenie, who is also a witch and her rebellious brother Nicky, who is a warlock. Yet while she doesn’t mind working and for the most part being an independent free spirit, she has grown restless and wants someone to love. The trouble is love for a witch is something that will make them forfeit her powers if she were ever to truly feel genuine love for another. She takes a shine to publisher Shep Henderson, one of her neighbours who she meets for the first time on Christmas Eve. Knowing that love seems out of the question due to her magical ties, she politely talks with the nice Shep. Yet, it’s when she hears that he is about to marry a former college enemy of hers, that an idea formulates in her mind to have some fun.

With her magical cat Pyewacket and her mystical powers, she casts a spell on the unsuspecting Shep that causes him to jilt his fiancée and fall in love with her, despite not knowing what has caused him to do so. Pleased with this, Gil revels in the fact that her powers could let her do something like this. Meanwhile, Gil’s brother Nicky, who is always up to some trouble, begins to help the author Sidney, who has written a book on alleged witchcraft and is curious to write another. This in turn could lead to the exposure of Gil and her Aunt, so more magic becomes involved and at play. Gil, after a while and even though she only did it to spite her rival, begins to sincerely fall in love with Shep which leads her to a conflict of interests. But can the free-spirited Gil really give up all of her magic for the love of Shep? And just how long will it be before Shep twigs that something supernatural is at work?

On the directing front, Richard Quine injects Bell, Book and Candle with a light air that creates amusement and romance in equal fashion. He may from time to time indulge in some scenes that go on for longer that needed, but for a lot of the film, he gives it a bit more substance than what is often found in most romantic comedies out there, even today.

He excels at displaying touching undertones to it, best embodied by the decision that Gil must make regarding the loss of her powers for actual love. And the inclusion of the supernatural, with spells and potions ever-present, is a neat one that emphasizes the charm and imagination the film can bring to viewers. Now it must be said that as Bell, Book and Candle is a film that was made in the 1950’s, some of the attitudes are going to be of that time and will seem strange today. Chief among these is the similarities between Gil losing her powers if she loves and the fact that during the 50’s once a woman was engaged or married, she would have to stop working and be a housewife. One can definitely see the parallels throughout, but thankfully this doesn’t do too much to demerit the film’s quality and story it tells. And then again, what film from decades ago hasn’t aged in its attitudes and execution? The script is witty and full of hijinks as there is something funny to be found in Shep making all these big decisions and not quite realising that there is a magical reason for them. On the side of visuals, some inventive angles coupled with eye-popping colours are stunning to behold and contribute to the playful vibe of the film and the eccentric situations that the characters find themselves in due to magic and spell casting. The costumes in the film, especially the ones worn by Kim Novak, are exquisite and delightfully highlight her character’s individualism. A lively and twinkling score gives a breezy and likable quality to the film, while also providing some spooky moments that are always welcome for someone like me.

The cast of Bell, Book and Candle all look like they are having a ball which adds to the audience’s enjoyment of this supernatural romance. Kim

Novak excels at having an otherworldly quality that is ideal for the role of Gil, who is someone you wouldn’t miss in a crowd. Novak, while looking stunning and alluring in the role, convincingly showcases Gil’s meddling, playful nature akin to a cat and desire to be loved that she didn’t expect to have. With added moments of touching emotion, Novak’s work is a triumph that is funny and moving. James Stewart has the right touches of bewilderment and rationalism for his character, who amusingly becomes infatuated by the enchanting Gil without being aware that something out of the ordinary is going on. He shares a tentative and sparkling chemistry with Novak, that gives the film a big plus in the romance and humour department.A sparkly eyed Jack Lemmon is an utter hoot in the part of the mischievous Nicky, whose tricks and Hocus Pocus are never far behind him. 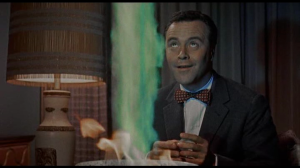 Some of the facial expressions that he has and sense of fun he brings are hard to miss when he’s on screen. Playing well off him is Ernie Kovacs as the alcohol swigging author who is often disgraced due to his belief in witchcraft, even when its lying right in front of him and he’s aided by the troublesome warlock Nicky. Elsa Lanchester and Hermione Gingold are delightfully amusing and dotty as two older witches, though I would have liked to have seen more of them within the film. Still, both actresses light up the screen when they are present.

So while the odd slip here and there is present, and the dated attitudes can be a bit distracting, Bell, Book and Candle triumphs as a piece of imaginative and well acted romantic comedy, sprinkled with amusing and sometimes spooky sides of supernatural fantasy.