A seriocomic drama about reflection on the past, the difference in generations and loss, The Big Chill is a highly resonant and extremely well written film from Lawrence Kasdan. He is aided by a fine cast that do wonderful work in this look at how times change and we can feel adrift in the world that doesn’t hold the promise it did when you were younger.

A group of former friends from college in the 60’s are reunited unexpectedly years later when one of them, the much talked about and promising Alex, commits suicide. The group is made up of married couple Harold and Sarah Cooper, disillusioned television star Sam Weber, unfulfilled attorney Meg, slightly lecherous journalist Michael, Vietnam Vet and pill-popping Nick and unhappy housewife Karen. They haven’t seen each other since their heady days in college and the funeral of Alex brings them back together under dark circumstances. The wake is held at Harold and Sarah’s vacation house in South Carolina.

The main people of the group, who don’t know how to deal with the suicide of Alex, stay over the weekend along with Chloe, the much younger girlfriend of the deceased. During the course of the days, the one time close-knit faction are found to be laying bare their secrets, reminiscing on the past and attempting to fathom why Alex killed himself. The big thing that hovers over them all is that lingering sensation that the best years of their lives have passed them by and their vibrant dreams of youth have gone up in smoke. Various little dramas come to light again, like Meg wanting to desperately have a child as she feels her biological clock is ticking and Karen dealing with her unresolved feelings for Sam. Throughout the time together, thrashing out their differences and opening old wounds, they are left to ponder and work out just what to do with their lives, along with whether they can rectify what eludes them and unearth how much Alex’s death has impacted on them.

Lawrence Kasdan fashions a heartfelt yet perceptive evocation of people dealing with responsibilities and thinking back on how much they changed since college. The script that he wrote, along with Barbara Benedek, invests The Big Chill with a quick wit and revealing nature, that benefits the struggles and issues the group go through. They all feel at sea in the materialistic 80’s, when all they crave is the feeling of life and hope that the 60’s gave them being baby boomers.

The plot largely revolves around the group discussing their problems, reminiscing of the good old days, smoking pot and wondering where the time has gone. Some may find that idea more than a little boring, but The Big Chill is the total opposite because of the amount of personal feeling injects do into it. You really get to relate to the characters and what they’re going through, even if they don’t know how best to deal with grief and a sense of something missing. It’s one of those things that is universal for everyone; the knowledge that life is different from how you expected and hasn’t taken the path you wanted. Thankfully as tinged with melancholy as The Big Chill is, there is a balance it strikes with quick humour long the way. The film, like the characters goes between laughs and tears, with an unexpected clarity and wisdom that shines through. Even if some of it feels a tad simplistic, the warmth and depth of the piece are always in evidence. The soundtrack is one of the best parts of the movie, recalling the youth of the characters with Motown hits and 60’s grooves. Music plays a very integral role for all of the group and also the audience, as music holds a special place undoubtedly for all of us with the wistful memories it can evoke. The opening sequence is a masterful example of combining music with telling a story. In it, each of the group receives the news and we catch glimpses of how they react, as the sound of Marvin Gaye’s ‘I Heard it Through the Grapevine’ plays in the background.

The Big Chill boasts a simply star-studded cast that are given a moving and frequently funny script to work with and deliver natural, unaffected performances in the process. This is a beautiful ensemble of acting that allows everyone a chance to shine. 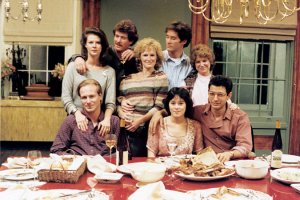 Kevin Kline is very good as the amiable joker Harold, who has his own deliberations to deal with along the way. Glenn Close beautifully supplies a nuanced turn as the earth mother and good listener, who attempts to keep everyone and herself together and not fall apart. The typically sardonic personality of Jeff Goldblum covers the seedy journalist character, while Tom Berenger sells the feeling of alienation that fame has brought him over the years. William Hurt is on lugubrious form as an overly cynical and morbid man whose life is like an empty shell and needs some lightness to brighten it. Mary Kay Place has the right amount of humour and pathos to bring Meg’s need for a child to life, complimented by some wily observations. Rounding out the main group of reunited friends is JoBeth Williams. She quietly but noticeably gets across the aching want for some love that her character finds has missed her, and there is a real tenderness to her pining for Sam. Meg Tilly, as the youngest member of the cast and most youthful character, has a boundless and quirky energy of a girl who doesn’t react to death the way you’d think. Her character is mainly a symbol of the exuberance and wistfulness of being young and idealistic, that the group is wrestling with the knowledge that they aren’t anymore. The whole cast works convincingly together, selling the fact that their friendship despite the years remains quite intact and there to be rediscovered over the weekend of rumination.

A nostalgic as well as very honest depiction of bittersweet grappling with all sorts of change and facing up to the different ways that life affects us, The Big Chill still has a large impact of being moving and amusing. This is largely thanks to the splendid direction, script and cast that make the experience really something.