A visually arresting and thematically rich dark fairy tale from the pen of Angela Carter and immense craftsmanship of Neil Jordan, The Company of Wolves sucks you right into its world of haunting dreams and metaphors that will be impossible to shake once you’ve viewed them.

The Company of Wolves takes place almost exclusively in the dreams of a young girl by the name of Rosaleen.

She dreams of living long ago in a village, surrounding by a foreboding forest. Her older sister is killed by a wolf, sending the village into shock. Her Grandmother, who is wise and filled with stories, arrives and begins informing the sheltered Rosaleen on dark subjects. She explains that her sister wasn’t taken by any wolf, but a werewolf. She goes on to warn her granddaughter of not straying from the path in the wood and keeping distance from men whose eyebrows meet in the middle. Grandmother also gifts Rosaleen with a red shawl, which she almost always wears. At this time, Rosaleen is fascinated by the stories, which include one about a husband going missing. When he returns, his wife has remarried and his rage comes flying out in the form of a transformation into a wolf. Despite the warnings from Grandmother about wolves and that many of them are hard to tell in human form, Rosaleen can’t help but be curious about the opposite sex and alternates between running from growing up and grasping for it. One day, she is sent to visit Grandmother meaning she must take the path through the forest. Let’s just say things get interesting and many things Grandmother told her come into fruition once she meets a mysterious and most unusually seductive Huntsman.

Neil Jordan is the perfect director for The Company of Wolves, due to his skill with visuals and also haunting atmosphere. Both are very much in evidence here as is his wise decision to focus on story rather than just scares. Don’t get me wrong, The Company of Wolves is most certainly an adult horror, but it has more thoughtfulness going for it than you’d think. In short, Jordan is at his best with this movie. The Company of Wolves chock full of symbolism and Freudian overtones, plunging us further into the mind of a young girl who is both excited by and terrified of her own burgeoning sexuality. 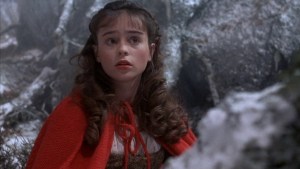 Carter, adapting from her own spin on fairy tales that was entitled ‘The Bloody Chamber’ and collaborating with the visually inclined Neil Jordan, are a dream team at incorporating the sense of innocence being lost and the feverish emotions of puberty, when the world seems alien to a person. As a viewer, you are taken on quite the experience that slowly intensifies and gathers staggering momentum in terms of thematic material and. The sexuality angle and subject of changing is never far from the screen, with lycanthropy standing for the body altering as you grow up and the way that Grandmother warns of not leading the path( in other words, straying into sin).  It’s not a movie for everyone as the narrative and structure may confuse certain viewers. But for those willing to see a dreamlike horror fantasy that covers curiosity, sexuality and darkness, you should be in for a treat. The effects, mainly in the transformation scenes, use animatronics which might not have the smoothness of CGI, but at least have something more unusual and downright creepy to them. I found myself getting very unsettled as people morphed into werewolves and screamed out in pain as their bodies underwent a severe transformation, which contains all member of messages and interpretations. The eerie sets resemble something from a Hammer Horror and are accentuated by a red heavy colour palette, combining danger, passion and death into an already heady cauldron. A spooky and bubbling score from George Fenton further amps up the unsettling nature of the stories and the dreamlike way they are presented to us.

Young Sarah Patterson possesses a radiant innocence and naivete that is played well and you can see her mind in overdrive as the temptation of adulthood comes calling to her. With her soft voice and angelic face, she is an ideal vision of Little Red Riding Hood in this passionate and very dark fable.

Angela Lansbury is on scene stealing duty; capturing a loving kindness and uneasy creepiness of the wise Grandmother who is full of story and warning. Lansbury is a pro in every sense of the word and I loved her eccentricity and slightly off kilter appeal in The Company of Wolves. Micha Bergese has this downright slippery and creepy vibe that is employed to fine effect as he slinks his way around Rosaleen and tempts her. It’s all in the voice and the eyes with him. David Warner is the young girls father in a supporting role, while Stephen Rea makes his story undeniably unnerving and spine-chilling. But by far the biggest star is the atmosphere of it all.

A dark and menacing variation on Little Red Riding Hood and a commentary on reactions to coming of age, The Company of Wolves spins a compelling web of creepy fairy tales and evocative material that you’ll find yourself thinking over for a long time.