You Will Meet a Tall Dark Stranger

Although there is wit and drama to be found, when watching You Will Meet a Tall Dark Stranger, you can’t help but feel that Woody Allen has done better movies over the years. Sure he knows how to write some great characters and situations, but unfortunately this movie isn’t a shining example of his talent.

The film focuses on the tangled love lives and questions of fate within a family living in London. Firstly, we have Alfie who has had an epiphany that time is not on his side and that he needs to relive some of his lost youth.

The first step to do this is to divorce his shocked wife Helena, who because of this becomes friendly with fake fortune-teller Cristal, who she begins to trust almost completely. Life then becomes besotted with the much younger Charmaine, who is a former call girl and gold digger. Alfie quickly marries her, but soon enough he looks like he may regret it as her money spending gets out of control and his bank balance plummets. Alfie and Helena’s daughter Sally works in an art gallery, hoping one day to open one of her own yet blighted by the fact that her husband Roy is a washed-up writer. Roy wallows in misery at a lack of inspiration because his first novel was a success, but he has failed to replicate it in the following years. He is currently awaiting the response to his latest submission, but the arrival of Helena talking of cosmic energy does nothing to quell his fears. 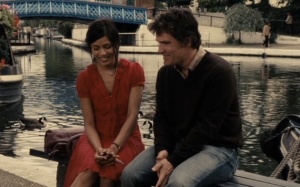 He finds some form of solace in a growing attraction to Dia, a beautiful music student who lives in the apartment opposite. Sally has grown tired of Roy’s lack of success, moping around and wants to start her own family, which seems out of the question as Roy has no intention. While at work, she begins to develop feelings for her new boss Greg, yet she doesn’t know whether to act on them or not. Let’s just say, entanglements ensue.

While it must be said that Woody Allen still has the ear for dialogue, he isn’t on his finest form here leaving many of the stories feeling tired and exhausted. You Will Meet a Tall Dark Stranger isn’t completely terrible, it is actually quite good in parts.

But I can’t help have the nagging feeling that Woody Allen can do so much better than this. One major problem I had with the film was that as certain stories seemed to get going, they were shoved to the back and not focused on a lot. This in turn made You Will Meet a Tall Dark Stranger a disjointed film, because some stories work a lot better than others and certain characters were more engaging than others. There are positives to the film to be found, despite the flaws that riddle the piece and make it one of his less accomplished efforts. I liked how the theme whether fates holds sway over lives and loves was presented, in the form of a charlatan fortune-teller whose predictions are often quite close to the truth. As is typical with a multi layered film, some parts of You Will Meet a Tall Dark Stranger work better than others. When it does work, the film has a gleefully ironic tone to it that is hard to miss. This is best summed up in the narration that has a mordant view of events and takes swipes at the misfortunes and romantic entanglements the characters find themselves in. A jaunty jazz soundtrack is used well enough to signify the changes in love that everyone goes through.

Anthony Hopkins is on good form(yet again, when he is not anything but excellent?) as Alfie, who thinks the grass is greener on the other side and is in for a rude awakening as it turns out to be not the bed of roses he expected. The delightful Gemma Jones is by turns funny and touching as his former wife, who takes to consulting supposedly clairvoyant forces for answers on her directions in life. Naomi Watts is splendidly overwrought as the frustrated Sally, while Josh Brolin, all scraggly hair and hangdog appearances is suitably pathetic and engulfed in self-pity as the washed-up Roy, desperately wanting success.

The main standout within the cast for me is Lucy Punch as the trashy gold digger Charmaine. She helps provide some outrageous humour and crude appeal as Charmaine begins to fleece Alfie for every penny he’s got, despite not being the brightest person there is. Punch just has the necessary humour and attitude for the part that she clearly makes the most of. I myself found that Antonio Banderas and Freida Pinto were shortchanged with the material they were given. Both are talented stars, but the script just didn’t have enough flesh on the bones of either character for them to register with me. At least Pauline Collins, despite being only seen sporadically, is very amusing in the part of the fortune-teller who may actually be telling the truth.

With too many loose ends not tied up and some actors wasted in their respective parts, You Will Meet a Tall Dark Stranger just lacks that extra spark that a lot of Allen’s work has. In the end, it resembles something akin to a mess that had potential but somehow squandered it.