A gorgeously scenic and romantic movie, Letters to Juliet is a somewhat slight but nonetheless lovely film about a second chance of love and the adventure of it.

Sophie is a fact checker who wants to become a serious writer, but has always put it off due to one reason or another. She has a romantic getaway before her wedding planned for her and her husband to be Victor.

He is a chef whose main priority is making time for his new business venture, leaving little in the way of time spent with Sophie. They go to Verona, where Victor is overly busy with things for his restaurant. This means that Sophie explores the romantic and historical place alone. On one such day, she encounters the Secretaries of Juliet; women who answer the lovelorn letters left at the fictional heroine’s house. Helping the ladies with their tasks in an attempt to inspire her own writing, Sophie discovers a hidden letter in a crack in the wall where many leave their questions. The letter is over fifty years old and was written by Englishwoman Claire, who poured her heart out about having to leave her beloved Lorenzo behind. She believes she must right back and does so, little suspecting anything will happen as a result. Which is why she gets the shock of her life when Claire, who is now older and widowed, turns up in Verona following Sophie’s advice. Her foppish and snobby grandson Charlie is also there and immediately berates Sophie for what he says as foolish actions. Claire on the other hand is a lot more understanding and grateful to Sophie and wishes to find her Lorenzo, all of these years later. She is hoping for a second chance with her soul mate, having left her romance with him in the back of her mind. 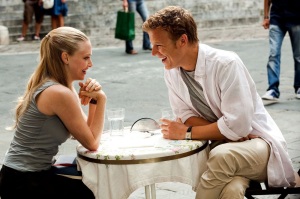 Charlie is completely reluctant to do so, but is strong-armed into it by his Grandmother and begrudgingly, Sophie. In the course of all this searching in Italy, Claire’s journey causes Sophie to examine her own relationship with her soon to be husband and how it may not be quite what she expected. Potential romance may come in the form of Charlie , but it’s chalk and cheese at first for the mismatched pair.

Gary Winick’s direction is bright and bubbly, wrapping us in a whirl of rose-tinted romance and soul-searching. He does a commendable job and plays to the audiences expectations in a way that’s reassuring as we are fully aware of the outcome. The Italian surroundings and setting are simply put magnificent. With an old-fashioned golden sheen that is irresistible to the eye, faith in love and adventure set in ideally. You can’t help but feel romantic when watching Letters to Juliet.

Don’t expect big surprises from Letters to Juliet as it’s doubtful you’ll find any. But that almost adds to the virtue of the film; it doesn’t make any pretence about what it is. It’s a gorgeous, almost fairy tale like story of romance and unlikely circumstance that will get even the most cynical to crack a grin. Plus, the feeling of familiarity is very comforting as you have a great idea of the luscious content of the movie. It’s the last half of Letters to Juliet that really drags on, though the parts before it are agreeable and make up for the overly long areas. The score is acceptable enough while being nothing too mind-blowing or original, which is to say it does the job in the expected way of romantic movies.

Amanda Seyfried heads the cast with plenty of winsome appeal and loveliness. Her fresh face and sincerity can’t be faulted as they are too inviting to resist. it’s not a stretch of a role, but one Seyfried plays well nonetheless.

It is Vanessa Redgrave who truly comes alive and is one of the best things in Letters to Juliet. With her simply mesmerising voice and air of class, balanced by something fun-loving, it is a fine showcase from a special actress. With just a look, you can feel her desire, longing and quiet regret so beautifully. The film simply wouldn’t be the same without her clout and dignity. Christopher Egan has the handsomeness and posh demeanor that is right for the part of Charlie, whose snotty antics are subdued by Sophie in a gradual way, while Gael García Bernal is rightly self-absorbed as Sophie’s man whose interest in his own business seems to come before her.

While wholly predictable, the gorgeousness and the fact that it’s heart is in the right places ensures that Letters to Juliet is an enjoyable and light experience.

Alejandro Gonzalez Inarritu’s ambitious and thought-provoking film spans three continents and many characters whose lives are linked by an accident. Although this may sound like a film that will confuse many, it actually emerges as a haunting comment on the lack of communication between humans and how universal the feeling is.

In Morocco, American tourists Richard and Susan are attempting to heal the wounds left by the death of their infant child. The loss has strained their relationship and affected both of them deeply. Whilst on a tour bus through th

e extensive mountains, Susan is accidentally shot by two young goatherds. The injured Susan is taken to a nearby village for treatment, whilst waiting for help to arrive from the American Embassy. Intercut with this is the two boy’s reactions to the accident and what they will do next. Meanwhile, the couple’s Mexican nanny Amelia, takes their children across the border to Mexico to attend her son’s wedding. Whilst coming back with her nephew Santiago, they are questioned by border control and flee into the arid desert. Amelia then tries to help the children make it back home before the desert claims them. Rounding out the stories is the one of Cheiko, a deaf-mute Japanese girl who is reeling from her mother’s recent suicide and has become cold towards her father because of this. In a way to mask her pain, she becomes sexually uninhibited but s

till can’t rid herself of the feeling of isolation. As told in Inarritu’s trademark non-linear narrative and written by Guillermo Arriaga , this sprawling character study is both melancholy and reflective in its examination of interlinked events.

The acting in Babel adds to the story immensely. As the tourists struck by sudden tragedy whilst dealing with conflicting emotions , Brad Pitt and Cate Blanchett turn in strong, emotional performances. Gael García Bernal is also on typically good form here, I can’t think of a time when he isn’t great. But the real highlights come from Adriana Barraza and Rinko Kikuchi. Barraza creates a strong, loving character who will do anything to protect the children she has been entrusted with. Her

face when trying to look for help in the unforgiving desert runs the whole gamut of emotions. Kikuchi as the isolated, troubled and melancholy Chieko is outstanding, conveying the character’s pain and inner conflict with the tiniest of nuances. Her breakdown when she remembers her mother is heart-wrenching in its believability.

The camerawork featured throughout is stunning, capturing the difference in cultures and landscapes that separate the many characters making up the story. The sparse but evocative music further shows the theme of communication as it often plays over scenes of confusion between the characters.

A powerful and emotionally draining film that will not be for everyone , Babel is still a multi-stranded and powerfully acted study of personal confusion and conflict and the far-reaching effects of it.