The delightful duo of Gill and Emma invited me to take part in a tribute to the excellent Jeff Goldblum. I’ve always been a fan of his and enjoy whenever he graces the screen. I decided to review the adventure blockbuster that is Jurassic Park.

A full on thrill ride with eye popping effects and Steven Spielberg at some of his best, Jurassic Park is an ageless spectacle with the power to shock, scare and entrance from start to finish.

Dr Alan Grant( Sam Neill), who specialises in Paleontology and Dr Ellie Sattler(Laura Dern), whose field is Paleobotany are romantically linked and currently working on another dig of dinosaur fossils . 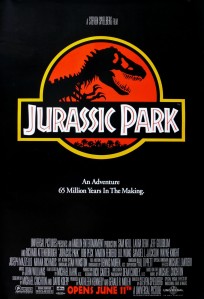 One day to their Montana dog comes eccentric billionaire John Hammond( Richard Attenborough) who has a proposition for them. He has created a theme park off the coast of Costa Rica which is inhabited by cloned dinosaurs, which his team of scientists managed to create after extensive DNA testing and sampling. Hammond is worried because there have been doubts about the safety of the park and he wants Alan and Ellie to view it and give their opinions. Naturally, they accept the offer and are joined by mathematician and chaos theory nut Ian Malcolm( Jeff Goldblum). Also visiting are Hammond’s grandchildren, Lex( Ariana Richards) and Tim( Joseph Mazzello), who are more than curious about the park. Upon arrival, Alan, Ellie, Ian and the kids are bowled over by the cloned dinosaurs that have been brought to life and in the flesh. And though some of the group have their doubts about how ethical it all is, Hammond’s enthusiasm remains undimmed. Yet all of this will change as danger lurks right around the corner. A disgruntled worker by the name of Dennis(Wayne Knight) has accepted a shady offer to smuggle out dinosaur embryos to a competitor. To do this, he sneakily shuts down the security of the park in order to disguise his theft and leave undetected . The shutdown causes all power to go out but more dangerously, the electric fences that guard the dinosaurs open, setting the scene for chaos as the many carnivorous creatures go on the hunt with humans as their prized dinner. Alan ends up sheltering the terrified kids, while Ellie, Ian, Hammond, plus game warden Robert Muldoon( Bob Peck) and chief engineer Ray Arnold( Samuel L. Jackson) , attempt to restart the power and avert more horror. It’s up to the survivors to make it through the park and to safety before they end up on the menu.

Jurassic Park finds Steven Spielberg at some of his most fun and skilled. He displays sense of wonder at seeing these prehistoric beasts and then cranks the tension up when all hell breaks loose. He knows how to entertain and keep you on the edge of your seat throughout this adventure with sequences of immense excitement and haunting terror existing right after the other. 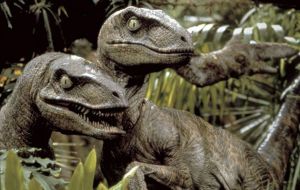 Simply put, it’s one of his best movies which is saying something considering the excellence in his filmography over the years. Memorable scenes abound like the magical first glimpse of the towering Brachiosaurus that’s truly staggering , the terrifying encounter with a Tyrannosaurus Rex and the nasty Velociraptors menacing Ellie in the maintenance shed as she switches the circuit breakers on and the children in the kitchen narrowly escaping being attacked. Many of these moments hold that balance between scary and exhilarating. I like the look at how playing God never ends up well, but it sure can be extremely entertaining to watch. There’s the greedy Dennis getting his comeuppance when attacked by an initially friendly dinosaur reveals itself to be bloodthirsty, Hammond’s growing realisation of what he has created and the chaos that ensues once the prehistoric creatures are let loose. One can’t speak about this movie without mentioning the influential special effects in it. They make the dinosaurs feel so real as if you could reach out and touch them. I mean, we all remember the first time we, like an awe-struck Ellie, witnessed the Brachiosaurus in all its glory, right? Or the first attack of the enormous Tyrannosaurus Rex on the visitors at nighttime? The blend of the then new CGI and animatronics is seamless in execution and so thoroughly convincing at bringing these ancient creatures to jaw-dropping. John Williams is on hand with one of his most suspenseful and alive scores; charting the wonder of the park then plunging us into the terror of fighting for survival against hungry dinosaurs.

Sam Neill has the laconic attitude right for his role, while shading it with a winning curiosity and eventual mellowing of his character’s occasional dour and solemn nature. In fact, he’s  one of the main heroes of the piece as he’s entrusted with two young children to protect against creatures he knows a lot about. Laura Dern backs him up with intelligence and when it’s called for action; her run to the shed and ordeal inside leave you on the edge of your seat as you watch an ordinary woman fighting against a terrifying situation. And of course the man of the hour and resident scene stealer is here by the name of Jeff Goldblum. 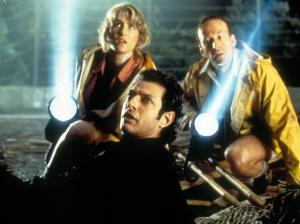 Portraying the know it all mathematician who drops sarcastic yet ethical  questions, Goldblum is a hoot. And considering for a big chunk of the film he’s incapacitated, he’s still dispensing entertaining one liners among the terror and excitement. It’s the definition of a star supporting turn. In a fine showcase, Richard Attenborough subtly shows the dreams of an eccentric man of money and his realisation that it isn’t the most ideal or safe thing to do. Although his actions are questionable, he just boasts a certain geniality that is hard to fault. Ariana Richards and Joseph Mazzello are thankfully talented child actors who you feel for on this journey. Fine work also comes from Samuel L. Jackson, Bob Peck and Wayne Knight in this adventure, particularly from Jackson as the gruff chief engineer who is never seen without a cigarette.

A simply phenomenal adventure with stellar effects, fine cast, wonderful music and the masterful Spielberg at the helm, Jurassic Park is a film you can never grow tired of.