A torrid affair has terrifying repercussions for a lawyer when the other woman won’t let go in Fatal Attraction, a suitably infamous thriller that deeply unsettles and disturbs. Infidelity and obsession combine in this well-acted and frightening tale of a woman’s scorn.

Dan Gallagher is a young lawyer who has a beautiful wife Beth and a young daughter Ellen.

He first meets the intriguing Alex Forrest at a book event, and though attracted to one another, he is unavailable. But when Beth goes away for the weekend, temptation gets the better of Dan and he engages in a steamy fling with Alex. Dan then wants to go back to his family and it is here when he first gets the idea that Alex is not going to let him go when she slits her wrists. After helping her clean her wounds, he returns to his family, yet Dan soon finds his life turned upside down by Alex. She incessantly calls him at work, she throws acid on his car, sends him a chilling tape detailing her love for him and famously kills the family’s pet rabbit( spawning the term bunny boiler in the process). It becomes very clear to Dan that Alex has now become obsessed with him and won’t take no for an answer. Terrified, he tries to smooth things over but Alex’s campaign of terror is only just beginning and she won’t stop until every obstacle is out of the way. What began as a fling morphs into a nightmare for Dan as the spurned and unstable Alex refuses to let go of that weekend and will go to the most extreme lengths to destroy everything in Dan’s life, including his family.

Director Adrian Lyne contributes a steamy and suspenseful atmosphere through his crisp direction that highlights the heat of the affair and later the increasingly disturbed and insidious ways that Alex takes revenge on Dan. It’s all about the build up in Fatal Attraction, as we witness Dan’s family life, the affair and slowly but surely the obsessions of Alex. 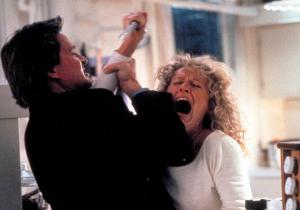 This is chilling to watch as it started out so simple and then became very complicated as the terrified Dan comes to see that his mistake is coming back to bite him. Fatal Attraction contains many moments of suspense and terror, most notably Alex sitting alone flicking the light switch on and off as her eyes become catatonic and when she follows Dan who is listening to her bone-chilling message about how she isn’t going to let him get away with leaving her. The unnerving atmosphere is held up very well and only loses it in the finale which goes overboard but still emerges as tense and creepy. An electronic score excellently backs up the realization of Dan that Alex is very dangerous indeed and that he is not going to escape her campaign of terror on his life.

Michael Douglas excellently portrays Dan as a man who has had his fun and now wants to leave, but witnessing that this isn’t going to happen. By turns sympathetic and unsympathetic, Douglas gives his all as Dan becomes more terrified at the prospect of what his fling will cause. 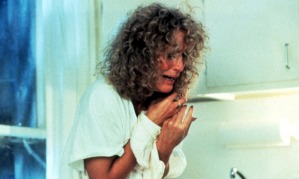 Glenn Close is the standout performer here, rightfully seen as iconic in this role. Exhibiting rage, obsession and terrifying intensity, Close knocks it out of the park and really becomes a frightening embodiment of a woman scorned acting out her anger. What really makes it such a great performance is the subtlety that it builds with. Alex in the beginning seems like a rational and flirty person with nothing sinister about her. But after Dan’s dismissal of her, the fury begins to emerge and Close reaches chilling heights displaying the anguish and warped mind of this woman. Anne Archer brings her great credentials to the supporting role of Dan’s wronged wife Beth, who is left reeling by his affair but who is willing to protect her family nonetheless.

A lurid and unnerving thriller if ever there was one, Fatal Attractions still remains sinister viewing.

In Portland, Oregon, a wealthy old man by the name of Andrew Marsh has been found dead after suffering a fatal heart attack while restrained to his bed with handcuffs. At the time of death he was watching a home movie and the police believe that the girl in the film, Rebecca Carlson, a beautiful art gallery owner and Andrew’s much younger lover is connected in some way to the death of him. Rebecca is arrested and put on trial, where her adventurous and unusual sex life is brought up as a means for her to kill her elderly lover. Representing her is Frank Dulaney, who tries everything he can to clear Rebecca’s name and counteract everything said by the opposition of Robert Garrett, the ambitious defense attorney on the trial. Garrett believes that Rebecca used her seductive charms and vigorous bedroom activities to murder Andrew, as the man had a debilitating heart condition and was set to leave his young lover $8 million in the event of his death. 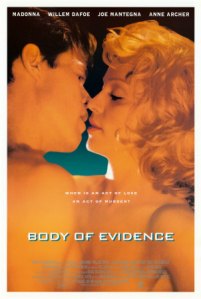 Yet as the trial goes on, the married Frank becomes increasingly entranced by Rebecca and throws professionalism out the window to pursue a torrid and unusual love affair with his client. Rebecca dominates Frank with her sadomasochistic tendencies in the bedroom and firmly sets herself up as the one in charge in the strange game of pleasure and pain that she plays. But sooner or later, Frank is left questioning whether or not this seductive woman was capable of cold-blooded murder with the use of her more than sensual body and is he really defending as well as sleeping with an avaricious lust murderer?

The whole set up of Body of Evidence just seems so ridiculous and one can’t take it seriously. The film itself tries to be serious in the court room scenes and surprising with attempted red herrings but it just ends up being completely laughable. Director Uli Edel tries to take the material seriously and does give the movie some good visuals such as billowing MTV see through curtains, candles flickering and sinister shadows, but even that can’t save this movie from inevitable disaster. The score manages to give the film some of the eroticism it sorely lacks with twinkling percussion and seductive guitar forming the backbone. Those two points about the visuals and the music are two of the only things that I can think of that can be praised in this weak film. Marketed as an erotic thriller, Body of Evidence falls short in both departments. The sex scenes between Rebecca and Frank are supposed to be eye-opening and titillating, with the femme fatale Rebecca introducing her dark world of pain and pleasure to the wide-eyed Frank, but the scenes( including the use of candle wax, restraints and an unusual encounter in a parking lot) end up feeling boring and not all erotic in the slightest. The writer tries to incorporate thrills into the story and make us guess whether Rebecca is guilty or not, but with the weak script we really don’t end up caring about whether Rebecca committed the crime.

Chief among the problems of Body of Evidence is the decision to cast pop superstar Madonna in the lead role. She’s never going to go down as the best actress in history, but at least in past movies such as Desperately Seeking Susan and A League of Their Own she was watchable enough and wasn’t a complete disaster.

Here her delivery of lines is stilted and unconvincing as her character is accused of using her sex life to kill her old lover. Everyone knows that Madonna can be sexy( hell if anyone knows that sex sells, it has to be Madonna), but that is all she brings to the part and nothing else. Willem Dafoe is wasted as Rebecca’s lawyer Frank, who enters into an illicit relationship with her. Joe Mantegna and Anne Archer don’t fare much better in their poorly written roles as district attorney and secretary for the deceased. And Julianne Moore is just wasted here as Frank’s wronged wife and it really is a shame to see one of my favourite actresses having to slum it with this weak film. Even an appearance from Jürgen Prochnow as an unreliable witness in the case can’t bring anything that great to this mess of a movie.

Unconvincing and not remotely as thrilling or sexy as it wanted to be, Body of Evidence is a weak film that seemed destined for the critical drubbing it received and with good reason.

Based on several stories by Raymond Carver, Short Cuts is Robert Altman’s in

tense, sprawling and minutely observed look into the eventful lives of 22 residents of L.A over a couple of days. Featuring a talented cast( as you may have guessed from the cast list above) that all contribute something to the story, Short Cuts works as an examination on the frailties of human behaviour, how people don’t realise how close we are to each other and how the smallest incident can have big consequences.

Without giving too much away and because I would probably need a lot of pages to write about all the stories, here is the brief outline of some of the stories. Doreen, a waitress struggles with her alcoholic husband Earl. To add to this she accidentally

runs over the young son of news anchor Howard Finnigan. The boy’s mother Ann panics while her son slips into a coma, and she is harassed by the local baker Andy, as she has forgotten to pick up the boy’s birthday cake. Zoe, a talented yet depressed cello player lives next door and has a strained relationship with her musical mother, Tess. Gene Shepard, a single-minded policeman is playing away with Betty Weathers. This incurs the wrath of her estranged husband Stormy, who finds an interesting way to claim back what belongs to him in the house. Claire Kane works as a clown, while her

husband Stuart goes on a fishing trip with his friends. On the trip, the men discover the corpse of a young woman in the river and debate what to do with it. Marian, an artist and her doctor husband Ralph have the couple over for dinner, venting their marital frustrations after one too many drinks. And the stories just keep on coming, fleshing out an interesting mosaic like microcosm of lives running congruent with each other.

Although the film runs for a long time, you probably won’t notice because of the intricate way the characters enter and leave each other’s lives. Altman, who often worked effectively with ensemble casts, further shows his craftsmanship with engaging us to the strange and unpredictable characters. Although the characters differ from each other, there is one thread that links many of them. The thread is hiding behind a facade; Marian paints to suppress her unhappiness, Zoe plays mournful music on her cello, Claire works as a clown to make money for herself and her husband. The film may not be to everyone’s taste, but one can’t help but marvel at the way Altman connects the many players of the cast and fashions a suburban tale of frustration, mental angst and dissatisfaction.

An intimate character study of a diverse group of people, Short Cuts is excellent and recommended viewing for the art of interconnecting stories and focusing on the effects of our choices in life.