A provocative and riveting satire on the societal pressures of being in a relationship, The Lobster has Yorgos Lanthimos at his most biting and weird with this drama, highlighted by very dark humour.

In a dystopian future, being in a romantic relationship is enforced. Those who are single are sent to a coastal hotel. 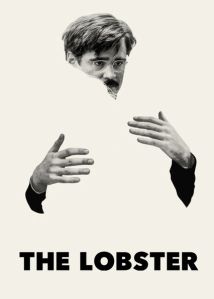 David is one such person after his wife leaves him in the opening scenes. Sure enough, he is whisked off to the hotel. He is informed by the Hotel Manager that he must find a soul mate within 45 days. If he fails to meet this deadline, he will be turned into an animal of his choice( his being a lobster that gives the film its title.) Guests are expected to find someone who they share a certain characteristic with, no matter how small or seemingly insignificant. In this strange system, many rules must be obeyed and are punishable with force if one doesn’t submit to the way of thinking. David attempts to find a companion in this bizarre place, as he watches others go to unusual measures to ensure they aren’t transformed. The guests are given some chance at surviving as each night they are sent into the woods to tranquillize people known as The Loners. Each body tranquillised earns them an extra day to find a possible soul mate. After a brutal encounter with a heartless woman, David flees the hotel and into the woods. There he meets The Loner’s; headed by a steely female leader. She explains that The Loners don’t believe in or condone love. In fact, if anyone does fall in love while in their camp, they are buried in a shallow grave that they dug earlier and left to die. What was first an escape from what he thought was a nightmare, being in the company of The Loners is just as restrictive. But David can’t help but fall for a short-sighted woman, a connection that puts him and her in extreme jeopardy. Yet as he is caught between two evils, he must decide what must be done to survive and maybe experience love with the Short Sighted Woman.

Yorgos Lanthimos is on dark and typically idiosyncratic form in his direction of The Lobster. His penchant for wide-angle shots and those that cut out faces are apparent and coupled with a number of close-ups. The grim and evocative cinematography of Thimios Bakatakis, shows the oppressive thinking of most in the film and is like a constant gloomy spectre over them. 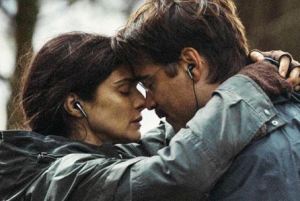 The fact that a lot of it is natural lighting adds a lot of dimension to the harsh surroundings and creepy underbelly of it. Typical of his work, Lanthimos spins mordant and very black humour into The Lobster. It infuses the movie with a strange tightrope that it walks admirably between dystopian shock and stinging lampooning. Absurdist is the order of the day as shocking events take place but are often undercut with a nasty glee and deadpan delivery. Which brings me to the script, as envisioned by Yorgos Lanthimos and his regular collaborator Efthymis Filippou. The strange, clipped way of speaking that was witnessed in Dogtooth is here, with more bite and laughs thrown into the mix. As troubling happenings and the full nature of both systems David finds himself in unravel, we are left with an acidic critique of modern dating and the implications of it. Lunacy is equated with normalcy here as guests of the hotel and The Loners represent two extremes of opinion and enforcement. Conflict with characters arises as both ends of the spectrum clash. And with most characters rendered no name, only a certain quality, weirdness continues to flow through the veins of The Lobster. Be warned, The Lobster will make you laugh as much as it unsettles with a collection of startling scenes. Macabre is one word that comes to my mind when describing this skewering of partnership and the way we all in some way conform to what’s expected of us in regards to relationships. how snap second judgements are apparent in real world relationships is explored heavily and symbolically by the policy of having to find someone who shares a similarity. Though events are exaggerated to grotesque and horrifying heights, they still have something to say to us about the world. And we are also left to deliberate a lot of things, building an ambiguous current from start to bizarre end. The piercing and often mournful score is unusual and another representation of just how outlandish the premise is and how twisted it is when you think about it.

A stellar cast get in touch with the weirdness and deadpan nature of The Lobster and what Yorgos Lanthimos envisioned. Colin Farrell displays great comedic chops, of the physical and verbal variety. Looking curiously out of sorts( plus shape), with various, vacillating expressions and with a biting look at things, Farrell is a very excellent lead of the film. Rachel Weisz shows the most emotion in the film, having the amazing ability to use a monotone voice(typical of the tone of the work of Lanthimos and in narration here) and have a face that expresses so much, particularly happiness and sorrow. It’s a fine piece of work from the always interesting and talented Rachel Weisz. 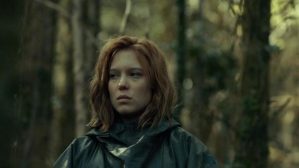 Léa Seydoux is searing and very chilling as the leader of the opposition, whose methods are just as cruel and unusual as the ones David ran from back at the hotel. If looks could kill, Seydoux would be slaying us all with just how vindictively convincing and brutal she is. Ariane Labed has mystery to her as a maid who you never know if you can trust her or not, as there is something sneaky about her. Ben Whishaw and John C. Reilly exude a certain naïveté about them as two men who ‘befriend’ and both want to avoid transforming no matter what. The two guys work well together and are collaborators who understand the ideas at play here. I liked their scenes with Farrell, where the shared awkwardness is purposefully palpable. Out the supporting cast, Olivia Colman is superb at portraying the cold, blunt and seemingly unfeeling Hotel Manager. Colman is a big standout in her screen time for her timing and delivery.  Jessica Barden, Ashley Jensen and Angeliki Papoulia all embrace the outlandish and creepiness of the piece, with only Michael Smiley being left in the cold with not much to do.

An absurdist story of conformity, dating and dystopia, The Lobster will not appeal to everyone out there. But for those who know of Yorgos Lanthimos and his trademark approach, you are in for a dark but strangely amusing treat that will linger in the mind.

21 thoughts on “The Lobster”