Shakespeare’s classic play Macbeth is one that is often committed to film many a time, but this version of the tragedy has enough clout and striking atmosphere to distinguish it from the crowd.

The film begins on a Scottish battlefield as civil war is raging. Lord Macbeth is fighting for the cause of King Duncan against the opposition.

The battle is a bloody one and following events will also change for Macbeth. After the battle, Macbeth encounters a group of witches who tell him of a prophecy that he will be king. The other part of the foreshadowing is that his friend and fellow fighter Banquo’s descendants will also be kings in the future, as Macbeth’s child has died. This prophecy, in particular the fact that he will become king, haunts and consumes Macbeth, who is unsure of how to react to it. Yet spurred on by the deep ambitions of his manipulative wife Lady Macbeth, he goes through with the deed and kills King Duncan. The King’s son Malcolm sees what has happened yet flees, leaving the throne wide open to Macbeth, who already holds a significant title. Macbeth, thanks to the murder he committed with the help of his wife, is crowned King just like the prophecy of the witches said.

But the grips of paranoia seize Macbeth and he is haunted by his actions. People grow suspicious of Macbeth and his ways, in particular Banquo and Macduff. This brings out the depraved cruelty within him that begins to wipe out anyone who stands in the way of his tyrannical rule. Soon Macbeth is spiraling into full-on delusional behaviour and outright savagery, as what was once good inside him shatters in the wake of his viciousness and ambition.

Adapting anything from Shakespeare must be a challenge, as you want to  stamp your own impression on the material and not just follow suit of everyone else, though keeping the feeling of the play is crucial to. No one need worry though with Justin Kurzel in the director’s seat. He makes this Macbeth bold, uncompromising and daring in style and content.

I’ve always seen Macbeth as something of a cinematic work, and Kurzel holds control over events like a maestro conductor with a dazzling repertoire of celluloid techniques that thrust the story into visceral and dark life. Mist and oppressive setting of the film gives grandiose and spooky ambience to Macbeth, that ensures that the coldness and savagery we witness practically seeps off the screen into our conscience. Gothic splendour exudes from almost every frame before we get an orange-red climax that is an exhilarating spectacle of overflowing anguish and corrupting darkness in which Macbeth faces off with Macduff. Macbeth should also be praised for adhering to the text in a largely faithful manner. It doesn’t try to bring anything up to date and has the verse intact, allowing the actors to savour the lines they are given. A Celtic influenced score matches the events beat for beat as treachery and murder ultimately take hold of almost every character.

At the heart of the film there is Michael Fassbender, who is searing as the eponymous character. Displaying a an engulfing ferocity that becomes more impossible to contain, Fassbender truly draws out the menace and cruelty of Macbeth. Yet in quite a few instances he humanizes the character a little bit, so you can practically feel the anguish and growing paranoia from the moment he stabs Duncan and begins his downward spiral. Fassbender is truly on fine form as Macbeth, wrapping his voice around every syllable with a commanding performance of intensity and suffering. Matching him move for move is Marion Cotillard as the driving force which is Lady Macbeth. 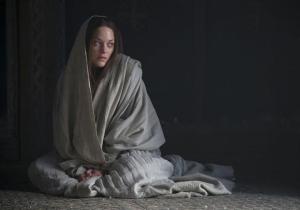 She’s a calculating woman of dark ambition that Cotillard plays to the hilt with a sometimes mask like detachment that serves the character well and gets the audience to puzzle over what is going on in her head. With the added sub-plot of her losing a child, Cotillard works wonders in unfurling that maybe Lady Macbeth has filled the devastating void left my her loss with a ruthless and cruel plots of which she has control over. It’s a different interpretation of the character that is all the better for the uniqueness that Cotillard provides, especially in the later scenes of a guilt-ridden woman knowing that a lot of her husband’s descent is by her own hand. The excellent supporting cast is strong and includes David Thewlis, Paddy Considine , Sean Harris and Jack Reynor. Each of these respective actors is fine in their roles, though the film ultimately belongs to Michael Fassbender and Marion Cotillard.

A visceral, violent and bold retelling of the play, Macbeth brings the action to the cinematic heights yet never sacrifices the intimacy or verse of the source material. Shakespeare never looked so brutal and entrancing as it does here.