A harrowing but inspiring true story is brought to the screen in the drama Lorenzo’s Oil. Focusing on Augusto and Michaela Odone’s unending determination and eventual success in finding a treatment to stabilize their son’s terminal disease, it gains power and deep emotion from heartfelt direction and most successfully two outstanding performances from Susan Sarandon and Nick Nolte.

Lorenzo Odone is a five-year-old boy as the movie opens, full of energy and brightness. He lives initially with his banker father Augusto and mother Michaela in the Comoros.

The family then relocates back to the United States and this is when things become very worrying for young Lorenzo. He begins to lose some of his hearing, has convulsions and displays neurological problems. His concerned parents have him evaluated and he is then diagnosed with the rare and complex disease ALD, which is usually fatal within two years and . Reeling from the prognosis, Michaela and Augusto find that no doctor is able to treat the disease because of how rare it is. But instead of sitting back and waiting for the inevitable, Michaela and Augusto begin their search for a treatment. Despite neither of them having any real knowledge in medical or scientific study, they soon bury their heads in research, reviewing records of tests and trying any means necessary to treat their son. Along the way, the couple are met with adversity and skepticism from support groups, doctors and scientists who are all about going through the proper channels and waiting until something is found. Undettered by the fact that nothing is in their favour, the two parents continue their crusade, hanging on by sheer will and faith that they will find something and not be torn apart by everything. 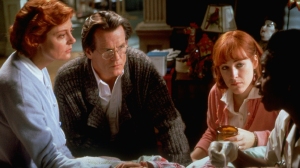 Eventually they manage to discover the usage of two types of oil that will break the boundaries of modern medicine and assist in stabilizing young Lorenzo’s condition, that many said couldn’t be treated.

George Miller as director crafts this inspiring film from the true story and keeps it rooted in emotion and faith. I admire the way that Miller successfully didn’t make Lorenzo’s Oil yet another  ‘Disease of the week’ style movie, instead bringing forth the heart and steadfast love that both parents exhibit and are willing to use if it means saving their son from an early death. Employing unusual angles and quick camera shots to place us right in the middle of the harrowing turn of events that befall’s Lorenzo and his family, before making the camera smoothly operated as a tiny glimmer of hope begins to appear when at first it looked as if there was none to find.

Despite the fact that the audience knows the outcome of the story, this shouldn’t be held against Lorenzo’s Oil as it really cranks up the tension throughout as the Odone’s bury themselves in anything that can be of help to their boy in a desperate time. If anything knowing that the family succeed only makes the film more inspiring and triumphant as it shows the tenacity of their hopes and research, that many wrote off as in vain but was proven wrong.

A major high point of Lorenzo’s Oil is the cast, in particular Susan Sarandon and Nick Nolte as the crusading Odone’s. Both actors pour the hearts and souls into the roles and it really shows. Susan Sarandon is a force of nature as Michaela, who holds firm that her son will survive and won’t listen to anyone else who says otherwise. 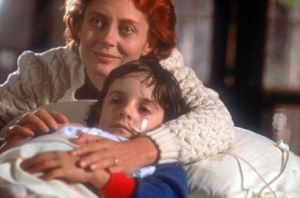 Part of this is why I found her performance so compelling, she never sugar coats the woman or makes her saintly. She snaps at others who don’t share her faith and can be ruthless in order to get what she wants, but all of that comes from a place of love and the soulful eyes of Susan Sarandon wonderfully portray this. Nick Nolte, sporting an Italian accent that gets easier to listen to as the film progresses, is equally as good as Augusto, who throws himself into research. He is the more rational of the two parents, yet while their attitudes at times of what is best to do clash, they are both united in their goal to save their son and Nolte sensitively displays this. Peter Ustinov is very good as a medical professor who wants to help, but whose hands are tied due to ethics, time and bureaucracy. Margo Martindale is hugely effective as the mother of two children afflicted with the disease and is one of the few people to be of support to the Odone’s. As the young Lorenzo, Zack O’Malley Greenburg shows him in the beginning as a vibrant child who is then struck with the disease that affects him significantly and cruelly.

Truly moving, evocatively performed by the cast and never falling into cloying sentimentality, Lorenzo’s Oil is a stirring account of determination in the face of hopelessness and the fighting spirit of a parent’s love for their child.