A legal thriller that was somewhat underrated and written off upon release, High Crimes is actually an efficiently made movie. It ain’t going to win any Oscars for originality or fresh ideas, but it more than does the job of being a gripping thriller nonetheless.

Claire Kubick is a successful attorney in a loving marriage with her woodworker husband Tom.

The great life they live together in California is shattered when Tom is captured by the FBI while the two are out Christmas shopping and charged with the murder of nine peasants in an El Salvador village years before. It transpires that Tom is not who he says he is; his real name is Ronald Chapman and he was part of a secret Marine Corps operation. He has been on the run for over twelve years and is now being accused of the savage murders. Claire is shocked by the revelation that her husband has hidden from her, but because she loves him so much deals with the emotions that come her way by suppressing them. Her husband tells her that he was present in El Salvador, but strongly denies any involvement. He says that he has been set up for the crimes by his Major James Hernandez, who is now working highly with a brigadier general. Trusting her husband and wanting to help, Claire decides to defend her husband during the military trial, as the man appointed to represent him , First Lieutenant Terence Embry, is impressionable and new on the job. Yet when the trial begins, Claire realises that none of the rules that she usually abides to and works with apply in a military court. She then seeks out someone who knows their way around the court and comes across Charlie Grimes; a former military lawyer who is now retired and prone to drinking a lot. 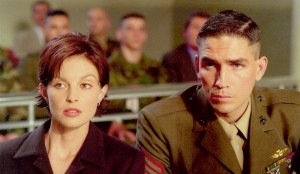 The tenacious Claire manages to get Charlie on side and help her husband in the trial; Charlie displays an aptitude for not playing by the rules and cutting through lies given by supposed witnesses. Yet twists and turns abound as evidence of a possible military cover up come to Claire’s knowledge and as she edges towards answers, risks her life in the process. Aided by the brilliant but not by the book Charlie, Claire is determined to get to the bottom of this no matter what happens. But is everything as it seems or very different to what meets the eye?

Carl Franklin’s direction of High Crimes is crisp and very well done. It’s not the best directing I’ve ever seen, but it does the job with a sense of urgency and commitment to the material in hand. 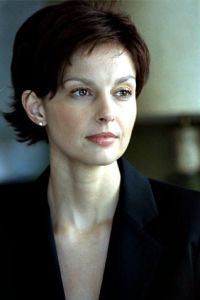 Tossing in red herrings throughout the movie, Franklin knows how to keep a thriller entertaining and engaging. Granted some of the twists are a bit drawn out and overly complex, High Crimes manages to retain interest due to some sharp writing and thrills. I’ve read some reviews of High Crimes that say it becomes incomprehensible and predictable throughout. I wouldn’t agree with the first part because the film is supposed to be shrouded in mystery and wrong foot the audience occasionally. A few parts of High Crimes are predictable, but its a hell of a lot better than some of the other thrillers to be found out there due to the way it keeps you on edge trying to distinguish the truth. Some of the courtroom scenes are very well-played with lies spilling out and questions going back and forth creating a lot of tension. A technique that was utilized excellently was the presence of flashbacks from differing points of view, designed to spin a web of doubt and accountability. It’s only employed in a few scenes during the film, but it is effectively used and not overly relied upon. The musical score is a little generic in parts, but a competent enough one to go with the tense material on display here.

Ashley Judd turns in a typically strong performance as the determined Claire, who stifles her shock to defend her husband and unearth the possible cover up of events. Judd makes the character tenacious, unwavering and natural as she navigates through dangerous waters.

She shares a great chemistry with Morgan Freeman, as both worked well together in Kiss the Girls. Morgan Freeman displays a dry sense of humour and serious undertones as the rebellious Charlie, who loves anything to get one up on the military and can run rings around them with his silver-tongued responses. With a glint in his eye and a sense of morality, despite his unorthodox ways of getting information, the character of Charlie is brought to life by the talents of Morgan Freeman. Jim Caviezel displays a sensitivity but an enigmatic presence as the man on trial, its credit to him that we are constantly on a seesaw about whether he is lying or telling the truth. Adam Scott impresses as the green lieutenant assigned to defend the man on trial and has some amusing moments due to the character’s lack of experience and sometimes naive tendencies. The same can be said of Amanda Peet who is delightfully irresponsible as Claire’s slobby sister who comes to stay and delights in being outrageous. Juan Carlos Hernandez, armed with a sinister smile and battle-ruined eye, is well cast as the menacing Major who may have been the perpetrator of the massacre in El Salvador. There is a small appearance from Bruce Davison as a smarmy brigadier, but I would have liked to have seen more of his character if I’m honest.

It doesn’t break any new ground and may get a little convoluted, but for a slick and entertaining thriller, High Crimes more than does the job.