A Vietnam vet’s tortured existence that blurs between reality and visions is captured in horrifying detail in Jacob’s Ladder, directed with creepy certainty by Adrian Lyne and anchored by a powerful turn from Tim Robbins. This is a film that will stay with you for a long time not just due to the haunting, disturbing story and bizarre visuals, but for its harrowing emotion rare in a horror film.

Jacob Singer is a Vietnam vet who after the war is now working as a postal worker in New York City.

Although now living with his seductive girlfriend Jezzie following a divorce from his first wife Sarah, Jacob is also mourning the death of his young son and recalling a terrifying an experience during the war when he was stabbed with a bayonet by an unseen soldier. Yet as he tries to move on with his life through his new relationship and job, terror soon encroaches upon it due to visions of demonic beings plaguing him in a fragmented fashion. On his way from the subway, a passenger’s face appears distorted and strangely warped. A nurse appears to have horns under her hat. A wild party turns into a room of beasts. What is causing these sights and are they real? Has Jacob’s mind been fractured by the traumatizing events in Vietnam? 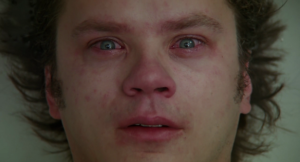 He begins to believe this theory when fellow members of his platoon come forward with their stories and they become convinced that the government did something to them while they were stationed in Vietnam. But with his visions growing stronger and finding it harder to distinguish what is real and what isn’t, can Jacob uncover the mystery before the horror completely overtakes him and he completely crumbles? With assistance from his kindly chiropractor Louis and a mysterious man named Michael Newman, Jacob attempts to fathom the nature of these visions and the validity of them before it is too late.

Adrian Lyne brings the nightmarish world Jacob inhabits to life with assured direction, that also taps into the deeper emotions of the story. His successful direction gives life to the ambiguities that Jacob’s Ladder throws at us and places us like Jacob in this abyss of not knowing what to believe or see. Visually, Jacob’s Ladder is phantasmagorical with horrific visions and sights. The fragmented nature of the movie as it cuts between past, memories and possibly delusions is edited with a disjointed quality that creates fear and confusion. Two particular scenes stand out that convey the sheer horror of the piece. The first features Jacob witnessing a man at a party’s head spinning violently fast as if in a constant state of convulsion. 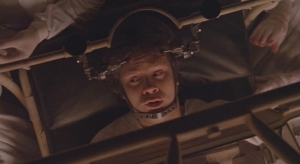 The second and most memorably terrifying is Jacob being taken into the decaying bowels of a hospital, strewn with body parts and disturbed patients. Strapped to a gurney, he is investigated by sinister doctor, including a man with no eyes. It truly is terror at its most psychological and unsettling. And yet for all of the horror on show, there is a very melancholy tone that pervades the movie, and is embodied by Jacob’s descent. The film can also be commended for the avenues of possibility it opens up. You’ve got the prospect of government experiments, the grief felt by the loss of a loved one and biblical allusions all at play and giving the film layer upon layer of ambiguity. An ambient score from Maurice Jarre backs the mounting events of bizarre terror and unexplained horror excellently, while underlining the tortured soul of Jacob.

In the role of the eponymous Jacob, Tim Robbins is emotionally powerful and devastating. He elicits sympathy for Jacob and the nightmare he is put through, and the audience feels the same way. As emotional as Robbins performance is, he also embodies the character physically. His movements are awkward and gawky due to his tall frame, his bespectacled appearance makes him look like a young boy and his expressive face is a marvel at conveying Jacob’s plight. In short, Robbins delivers powerful work of deep emotion and clarity. 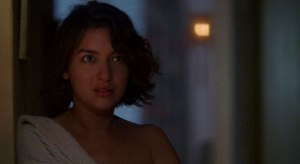 Elizabeth Peña smolders as the sexy but concerned Jezzie, whose name seems very appropriate given the biblical parallels of the story. While her sexuality is showcased often here, Peña gives the character a sense of mystery and fear as she watches Jacob’s slowly fall apart. Danny Aiello makes a mark as the almost angelic chiropractor who gives Jacob an important piece of advice in his search for answers, while Matt Craven is enigmatic as someone who knows more about why Jacob has been receiving these visions.

A deeply unsettling movie of horror and emotion, Jacob’s Ladder is simply an unforgettable movie.