He Love Me, He Loves Me Not

The phrase goes that there are always two sides to every story. In Laetitia Colombani’s He Loves Me, He Loves Me Not this is certainly the case. Presenting two sides to the ‘relationship’ between a young art student and a cardiologist, it is strange, bewitching and creepy. Starring Audrey Tautou in a role very different from that of Amelie and crisscrossing genres, it will most certainly leave you wondering about certain things when it finishes. 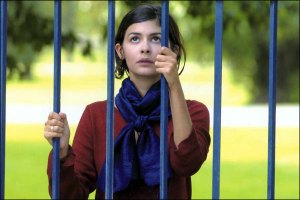 Angélique is a young, sprightly art student who is passionate about her work. Her pixie like smile covers the opening frames of the movie as she purchases a single rose for her beloved. The man in question is Dr. Loïc Le Garrec, a handsome cardiologist who happens to be married. Angélique believes he will leave his wife to be with her, but events change when Loïc’s wife Rachel becomes pregnant. Her usual happy and sweet self soon gives way to a descent into self-destruction as her pining is to no avail. It is precisely at this moment that Colombani uses an ingenious technique, she rewinds the film. This time the events are seen from the perspective of Loïc, and this time events that appeared innocuous in the first section take on a shocking new meaning as Angélique is this time revealed to be not as innocent as her lily-white persona radiates and that her love for him may in fact just be obsession. What started as a seemingly glossy romance and drama soon becomes a chilling, psychological thriller as twists and turns, shifts in perspective and a haunting score pull the rug from underneath you and leaves you questioning what happened before .

By showing us two perspectives, Colombani has crafted a tightly coiled film that at first lulls you into a false sense of security and then springs some shocking truths upon us. And although there may be some that may have guessed that there is something amiss in the relationship between the two, it shouldn’t detract from the overall jaw-dropping induced by the flashback to another side of events. He Loves Me, He Loves Me Not may have it’s fair share of occasional clichés and uninspired moments, but Colombani manages to make these few whilst crafting this chilling thriller. When the film begins, you may be forgiven for thinking it is just another sweet romance and then a drama about a wronged women. But once the switch in viewpoints changes, the gears of a thriller fall into place and the uncertainty regarding Angélique and her actions. Perhaps the biggest draw of the film is the casting of Audrey Tautou in the role of Angélique. Best known for her elfin charm and wide-eyed beauty, Tautou utilises these features to excellent effect by masking the darker side of her character behind this and making her all the more dangerous and ambiguous as a result of her disarming charm. It is Tautou who fixes the attention and after seeing this film, you may never see her as just the girl from Amelie ever again. Samuel Le Bihan is suitably handsome and intelligent as the unsuspecting Loïc , who becomes more paranoid as a result of the pining and ambiguous fixation of Angélique. In a supporting role, Isabelle Carré is excellently frightened by the presence of another person slowly tearing her husband apart. The haunting sound of a piano on the score adds a level of menace to the fixation and obsession on show.

Shrewd, chilling and deftly told from differing perspectives, He Loves Me, He Loves Me Not is creepy viewing as the various shocks arrive unexpected. Boasting a startling performance from Audrey Tautou, it is a film that will floor you as well as chill you.