A curiously slight and immensely flawed romantic comedy that brings in an attempt for magic yet doesn’t really work as everything feels tired, Woman on Top is sadly lacking in the story department and suffers. Save for the beautiful incandescence and considerable charm of Cruz , Woman on Top is a rather tepid and uninteresting romantic comedy.

Isabella Oliveira is a beautiful woman from Brazil who has been cursed all her life with motion sickness.

The only way for her to control it is to take the lead or be on top with most things. She is married to the macho restaurant owner Toninho, who serves out front while she acts as a chef. This is where Isabella’s gifts truly lie as her cooking has a hypnotic effect on people, but especially men as it weaves an unexplainable magic spell on the senses and the heart. The trouble is arrogant Toninho takes all the credit for everything while Isabella slaves away unnoticed. When Isabella discovers that Toninho has been cheating on her because he feels so emasculated by her always being on top, she flees to San Francisco devastated by his betrayal. She moves in with childhood friend Monica Jones, who is a transvestite and someone she deeply trusts. Trying to get her mojo back but constantly reminded of Toninho, she makes an offering to a Brazilian sea goddess that the village she once lived in worshiped to make her forget him. It appears that the prayer is answered as Isabella starts to get more confident and sexy. She sets about looking for a job as a chef, seeing as it is her deepest passion. 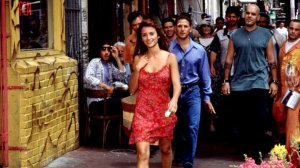 Surely enough, her bewitching personality and magical gifts with cooking attract the attentions of struggling television producer Cliff Lloyd, who is bowled over by her. He persuades executives to give Isabella her own TV show, which emerges as a major success. Meanwhile, Toninho is remorseful and deducing where his wife is travels to San Francisco, followed by his loyal band of musicians. He tries to win Isabella back, but she isn’t interested thanks to her newfound personality and the intervention of magic. Much confusion rises as Isabella pursues Cliff but is hounded by Toninho, despite the fact that she turned to magic for help in forgetting her cheating spouse.

Fina Torres in the directors seat does have some stylish touches to add to the film, but can’t quite bring the elements together in good harmony. It’s as if she’s trying to throw in all these things, such as comedy, romance, the seductive art of cooking and mystical magic and expecting them to work. Unfortunately for Torres, the parts don’t gel at all well and Woman on Top falls flat rather than rising high. A film like Woman on Top promises to be sultry and sexy, yet not much of that transfers from the screen due to the stilted vision and the only thing contributing anything earthy is Cruz.

Though it is supposed to be a comedy, there are nary any real laughs to be found in it which is a major disappointment(a running gag of Toninho serenading Isabella at every given chance becomes very numbing and tiresome) considering that it doesn’t deliver on what it was supposed to be. And any attempt to introduce conflict, such as Isabella’s dissatisfaction with the machinations of the network just emerge as hollow and hackneyed. Some pleasure can be heard and enjoyed in the smooth Bossa Nova soundtrack that is relaxing and injects some of the sensuality that Woman on Top sorely lacks in almost every area.

The biggest asset of Woman on Top and bringing out a much-needed sexiness is a delightful Penélope Cruz, who is as engaging as ever. 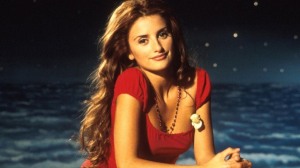 Cruz is clearly too talented for such slight material, but she manages to overcome all the flaws and display a dazzling array of sensuality, vulnerability and heart as the conflicted Isabella. She is clearly the main reason to continue watching Woman on Top even as it becomes over clichéd and something of a tired exercise. When you’ve finished this film, it will be the lovely Penélope Cruz that you will remember as her star appeal and talents emerge unscathed. Murilo Benicio, while possessing the overly macho personality of Toninho, is not given a role with enough scope to register which seriously doesn’t help the film considering he’s one of the romantic leads.

Harold Perrineau is another excellent standout playing Monica with a heart and sassy humour that bounces off Cruz very well. Perrineau and Cruz make for a good team in this film so it’s something of a shame that they couldn’t have had a better movies worthy of their talents. Mark Feuerstein however charming and bumbling, just can’t bring the dull role of Cliff to life as it is so poorly written and just not at all interesting.

Woman on Top just becomes a forgettable movie that had some interest, partly due to the sensual presence of Cruz, but can’t recover from an overly recycled story and a strange lack of feeling to it all.