The Bridges of Madison County

A tender and beautifully realised romantic drama directed by Clint Eastwood and containing great performances from the man himself and Meryl Streep, The Bridges of Madison County is a satisfying and mature film that will touch you.

The year is 1965 and Francesca Johnson is an Italian war bride married to farmer Richard and living in Madison County.

Although very much a loving wife and mother, Francesca is discontented with life and bored. Her husband and two teenage children go the fair for four days and this is where the crux of her story comes in. While they are away, she encounters photographer for National Geographic Robert Kincaid. He is there to photograph the many bridges of the area and first meets lonely Francesca when he loses his way. Soon enough, the two become friendly with each and the travelling Robert with his charming demeanor helps Francesca open up. What starts as friendship between the pair soon becomes love and for the four days that her family are away, she and Robert conduct their brief affair, not realising how much it will impact both of them. As the four days wear on, it is up to Francesca to decide whether to be with Robert who has made her feel alive once more or stay with her husband and children. The movie is structured around siblings Carolyn and Michael Johnson who have come back to the Iowa farmhouse that they grew up in after Francesca’s death.

While sorting out the land arrangements and thoroughly being baffled by their mother’s wishes to be cremated, they come across a number of diaries that she left to them. Curious about them, the siblings begin to read their now deceased mother’s story and are surprised to learn about how deeply the affair with Robert affected her and how they never knew this side to their mother until now.

As director of the film, Clint Eastwood displays masterful observations and subtle indications of the love that grows between Robert and Francesca in the brief time they spend together. He never resorts to sentimentality, instead giving The Bridges of Madison County a natural depth and passion that can’t be ignored. Eastwood doesn’t feel the need to rush the story either, he employs a carefully structured pace that helps the friendship that blooms between the couple eventually turn to deep love.

We see them genuinely fall in love through little things; a slight brush of the hand or a gaze are highly effective at bringing out the love that each begins to feel for the other. Some may wonder how the film could have a deliberate pace when the main story takes place over the course of just four days, but Eastwood lets events unfold in a very mature and beautiful way that compliments the story. Yes there are some lulls in the narrative, mainly when it goes back to the son and daughter, but for the most part it is very handled and exceptional romantic drama with both time zones corresponding. A building score of mainly piano and string gives voice to the passions growing between Francesca and Robert. And no discussion of this movie would be complete without giving a shout out to the simply gorgeous cinematography that envelops the movie in a hues of gold and twilight that burn into the memory.

What gives The Bridges of Madison County a whole heft of emotion is the cast. Clint Eastwood on acting duties is suitably fine as the wandering Robert, who brings out a new side to Francesca with his devil-may-care attitude and genuine clarity. I don’t think I’ve ever seen Clint Eastwood play such a sensitive character before, but he pulls it off admirably. Matching him every step of the way is the wonderful Meryl Streep. 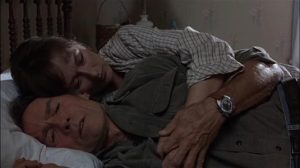 Combining a homely warmth, guarded passion and grace, she is wonderful at showing Francesca emerging into a totally different woman in the arms of someone who makes her feel like she’s been given another chance to live. The chemistry shared between them is tentative and filled with earnest desire, and it is really nice to see it be a love story concerning mature adults instead of the generic young lovers scenario. Annie Corley and Victor Slezak are fine as the children learning about their mother after her death, but the movie truly belongs to Clint Eastwood and Meryl Streep who give it a moving and haunting quality.

Heartfelt, filled with lovely cinematography and capable of bringing you to genuine tears, The Bridges of Madison County is a sublime movie that tenderly looks at how love can change us and stay with us forever.