A dark action fantasy with imaginative mythology, Underworld certainly looks terrific and has a bit more plot than you’d expect. It’s an imperfect film, but with oodles of style and a kick ass Kate Beckinsale , Underworld holds the interest and has quite a few things to recommend.

A war has been raging for many centuries invisible to human eyes. It has been fought between the vampires and the werewolves, here called Lycans.

Selene(Kate Beckinsale) is one such a vampire, referred to as a Death Dealer as she hunts down her enemy. We pick up with her as she hunts Lycans but finds something different this time. The Lycans are hunting a human by the name of Michael Corvin(Scott Speedman) ; which to Selene makes no sense as humans have no part of the conflict between the two clans. While pursuing Lycans, Selene becomes curious about Michael and how he somehow fits into events. The Lycans, headed by the slimy yet wily Lucian(Michael Sheen), have secret plans that involve blood and becoming more powerful . While the Vampires have plans to awaken one of their Elders very soon. Defying orders from the arrogant and scowling second in commands of  vampires Kraven(Shane Brolly), the reckless Selene investigates Michael and unexpectedly begins to care for him.  It then becomes clear that the conflict between the species isn’t as straightforward as many have been lead to believe. As various treachery is uncovered and her attachment to deepens, Selene begins to question what she’s been lead to believe just as the war hots up again and the dormant Vampire Elder Viktor(Bill Nighy) is awakened.

Len Wiseman is a very stylish director who makes a good go of bringing this story to life. He showers us with lashings of blood soaked violence, barrages of bullets captured in slow motion and leather gear throughout. And it must be said, on the visual scale, Underworld is rather dazzling . With a dark cinematography style bathing events in Gothic grey and moody blues, we are put into this nocturnal world of battles that feels fantastical and darkly intriguing.  What’s surprising about Underworld is that it isn’t just a mindless action fantasy, there is some good world building here. Occasionally it gets a bit too much with explaining things and the run time does leave a bit to be desired.

I feel the movie flags in the midsection before all matter of violence breaks loose and sucks us back into the spectacle that was so entertaining. As I mentioned previously, it’s not a perfect movie but it’s sure as hell entertaining when it’s in high gear. It’s flawed but definitely got a lot going for it and I for one enjoy the good of what Underworld provides to me. A thumping score that is definitely what I’d call early 2000’s accompanies the film and fits in with the aesthetics quite well.

Underworld is not what you’d call an actors movie per say, though it has a handsome cast. Kate Beckinsale, clad in a figure hugging latex catsuit, has the appropriate sex appeal, icy cool and sullen attitude for her role of Selene. 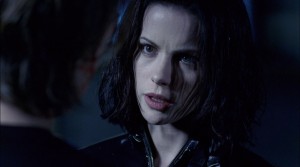 All these attributes work well as well as the physicality and reckless personality Beckinsale imbues into the part. She’s suitably cast and carries the centre of the e film as we watch her emotions become more prominent when Selene has tried to shut them off. In short, Kate Beckinsale is ideally cast and makes for a great kick ass heroine with a heart. Scott Speedman is mainly required to be startled and confused as the human caught in the midst of this war. Thankfully, Speedman does what he can with what he’s given and at least provides the centre of the story as he and Selene grow closer. Questionable morals and arrogant personality are on show from Shane Brolly as the leader of the vampires, who can’t help but feel inadequate when questioned by Selene and others on his judgment . Bill Nighy appears late but makes an impact as the Vampire, who while wise and seemingly respectable enough, may in fact be something more manipulative entirely .

So while it’s imperfect and not everything comes off, Underworld is still a largely engrossing fantasy with great action, nice wold building and good cast headed by the sexy Kate Beckinsale.