Based on the iconic comics and boasting some stunning effects, X-Men is often considered the film that helped reboot the superhero film genre in 2000 after a number of underwhelming efforts in the 90’s. Strong on both characters and action, X-Men is that rare thing: an action movie with an intelligent and interesting subtext of intolerance. 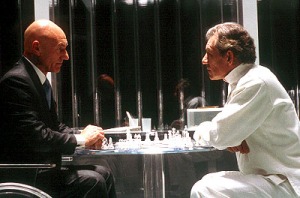 In the not too distant future, many humans have evolved into mutants, who possess unique powers. In a world of prejudice and fear, many of these mutants have been met with hostility by others. The film begins at a summit in which political figures are discussing the possibility of a “Mutant Registration Act” which would make all mutant declare their powers publicly. The leader of this is Senator Kelly, who has a deep fear of mutants. Present at the summit are Professor Charles Xavier, a highly powerful telepathic mutant and his old friend and now enemy, Magneto, who has the power to control electromagnetic fields to dangerous effects. Although enemies, they still have a certain amount of respect for one another. They discuss the idea of mutant co-existing with humans, but Magneto warns of the danger and hints at how he will take his plans into action.  Meanwhile, a young girl known as Rogue has run away from home after discovering she has the power to drain others of their energy, thus rendering physical contact almost impossible. Along the way she meets Logan, also known as Wolverine, who has rapid healing power and has claws that emerge from his knuckles when he is angry. After giving her a ride, they are attacked by one of Magneto’s henchman Sabretooth. Lucky for them, they are rescued by Storm and Cyclops. Taken to Xavier’s school for the gifted, they are provided with a safe haven from the prejudice of the outside world. Professor X watches over the school and attempts to educate the children who come there that they are gifted rather than evil or sick as the outside world has branded them. Other mutants include Jean Gray, a doctor with telekinesis; Cyclops who emits a strong force from his eyes and Storm, who can manipulate the weather.  Professor X is worried about what Magneto will do because of his attitude towards humans; X believes in living harmoniously with humans whereas Magneto believes mutants have a greater power. Joining the X-Men team, Wolverine and Rogue along with the others attempt to find out what Magneto plans to do before the power struggle swings into motion. Magneto is not alone, however and is aided by a group of dangerous mutants. This includes Mystique, a highly skilled shapeshifter; Sabretooth; blessed with menacing strength and senses, and Toad, who is a menacing and slimy presence. 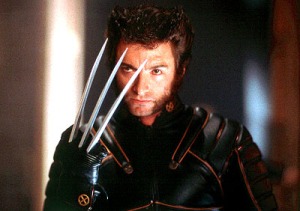 The first thing to notice about Bryan Singer’s movie is the screenplay. It excellently balances some excellent fight scenes with the presence of mutants becoming a metaphor for people suffering prejudice because they are deemed different by society. This makes the film relatable as well as immensely enjoyable. Many of the effects are stunning to witness, especially when it comes to showcasing each of the characters powers. Unusually for an action/fantasy, the characters are expanded and we get a genuine idea of what they go through as the narrative progresses. The music also adds to the action-packed atmosphere that pervades X-Men. One flaw could be that the pacing goes a little off in the later half of the film, but for the main part, X-Men certainly delivers the action/fantasy goods with more intelligence than most.

The cast assembled is what you could call top draw, with the actors carefully embodying these characters. Hugh Jackman is the standout as the aggressive, laconic and highly charismatic Wolverine, he really gets some great one-liners and his father-daughter relationship with the troubled Rogue manages to show a softer side. Patrick Stewart is exceptional as the wise and very powerful Professor X, who has some excellent some opposite Ian McKellen. Ian McKellen plays Magneto with a villainous glee that masks a past of suffering at the hands of others. The sexy Famke Janssen provides appeal as the telekinetic Jean, who takes a shine to Wolverine. James Marsden is a sullen presence as the second in

command Cyclops, who clashes with Wolverine at various times. Halle Berry manages to ooze a quiet intensity as the weather controlling Storm, she may not be given much to do but Halle Berry manages to make Storm memorable. Anna Paquin delves into the alienation of Rogue that makes her a relatable character to audience as we feel her pain at not being able to come into physical contact with anyone without endangering them. Fleshing out the villains are Rebecca Romijn-Stamos as the slinky Mystique, Tyler Mane as the vicious Sabretooth and Ray Park as the creepy Toad. And not forgetting Bruce Davison as the powerful senator, hell-bent on exposing mutants who comes to see what it is really like after an incident with Magneto.

Bryan Singer stunningly combines interesting characters, an allegory on prejudice and some amazing effects to fashion the outstanding X-Men.