Somewhat of a conundrum among movie fans and critics upon release, The Village is no doubt about it a flawed movie from M. Night Shyamalan. But there is something about it that always sparks my mind and it does have my opinion of it being a misunderstood movie.

In the late 1890’s, a sheltered village borders a foreboding woods. The Elders of the village speak of creatures referred to as ‘Those We Don’t Speak Of’, who inhabit the woods but who not many have actually seen . 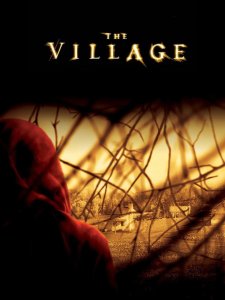 No one is supposed to cross the boundaries between the village and the woods as their is a truce stating this and that never the twain shall meet. The villagers all go about their days seemingly in harmony but whenever they see a red colour they must discard of it and appointed members take a nightly watch over the village and the woods. The quiet yet thoughtful Lucius( Joaquin Phoenix )has an idea to trek through the woods in order to get medical supplies for those in need of it as recently a little boy died who could have lived if medicine was around. The request by Lucius is denied by the village Elders, which include his guarded mother Alice(Sigourney Weaver). We learn that the mentally disabled Noah Percy(Adrien Brody)has once been in the woods but supposedly wasn’t seen by Those We Don’t Speak Of. Noah also has feelings for Ivy(Bryce Dallas Howard) , who is the blind daughter of Elder Edward(William Hurt) . Ivy though loves the stoic Lucius and is determined to bring him out of his quiet shell. Things change within the village when Lucius briefly steps over the boundary before being spooked and returning home. After this breach of truce, animal carcasses are found about the village, red warnings are left on doors and Those We Don’t Speak Of appear to menace the villagers. It soon becomes clear following a near tragedy that someone must pass through the woods in search of help. But just what will be discovered when the brave Ivy does?

M. Night Shyamalan is a very skilled director and he definitely knows how to stylishly delivery creepy imagery and emotion, plus a twist ending that is always going to be debated. Sequences like entering the village and menacing the locals are appropriately creepy as is Ivy’s eventual journey through the forbidden woods. These show M. Night Shyamalan exercising immense cinematic ability in displaying the build up in pace as we get to know the dwellers and their lives/routines.  I’m going to just put it out there that The Village is an imperfect film that while intriguing, leaves a lot of things vague and sometimes it doesn’t quite make sense. 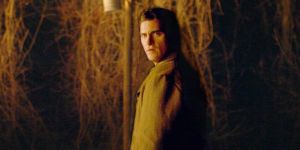 In some ways it provides a watchable mystery with a human heart, but then there are areas that really don’t add up when you actually give them some thought. Saying this, I do find that The Village  was pretty miss marketed at the time of release as a straight up horror movie when it’s more of a psychological drama/thriller in period costume. I think this made the public’s idea of what it would be to be very different from the finished article. And as a study in secrecy, belief and how fear/grief make an impact on those attempting to steer away from it, The Village is different but effective in its execution of those themes.

In terms of visuals, The Village looks glorious especially throughout, owing the mood enhancing cinematography of Roger Deakins that coats a lot of the unfolding film in a golden, near sepia tone which resembles flickering candlelight . This along with Shyamalan ‘s use of long close ups that start slow and then zero in on the faces of the cast add to the creepy and uneasy atmosphere. One of the best things in The Village is the sublime score from James Newton Howard and featuring the talents on solo violin of Hilary Hahn. It is by turns menacingly creepy and poignant in equal measure as the mystery unravels and the sense of sadness comes through to the sounds of ambience from James Newton Howard and the mournful yet expressive violin of Hilary Hahn . The duo deserve every inch of praise for their haunting contribution to a confounding movie.

Where The Village doesn’t falter is in its cast , which is pretty stacked with talent from top to bottom. Joaquin Phoenix, who I find is one of the most reliable and dedicated actors out there , is commendable as ever here. Contributing a thoughtful take on a man who often finds it difficult to express himself but who has enough gumption to begin to emerge from his shell, Phoenix is thoroughly superb. 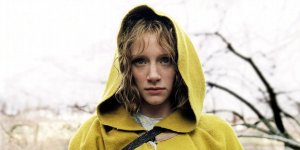 In an early role that helped her get notice and show off her talent we have Bryce Dallas Howard. Radiating a delicacy and alternating iron will , she’s beautifully convincing as Ivy. Though the character is blind, Howard makes her a character who refuses to be defined by this and instead is a rather forward thinking woman, who is braver than most of the eponymous village and not afraid to show it. Adrien Brody is effectively tragic as the misunderstood Noah, who finds himself in trouble but is not really aiming for it as he is not treated with the appropriate help, except from a sympathetic and beautifully understanding Ivy. William Hurt and Sigourney Weaver exhibit stoic secrecy and a guarded authority as the village elders who are a lot more than meets the eye . Brendan Gleeson emits a melancholy and dejected persona as a man who lost his son and is wrestling with the unimaginable grief. The impressive Cherry Jones is also effectively used as a high up member of the village with her own private sadness to hide .It’s only really Judy Greer that gets shortchanged with the role of Ivy’s sister. It’s not that Greer isn’t good, in fact she’s a very talented actress. Unfortunately it’s just that the part of Kitty doesn’t leave a lot of scope to do much with.

The Village has quite a bit to recommend and is quite an eerie and melancholy film from M. Night Shyamalan with many a great performance( particularly the one from Bryce Dallas Howard) and a superlative score. It’s still got many head scratching moments that can render some of it ambivalent for the viewers. Yet I believe some reassessment is in need for The Village, as it does have some forms of merit within it’s often mind bending story.