It isn’t the most compelling or exceptional thriller out there, yet The Net is competent entertainment filtered through a techno edge and having the luminous Sandra Bullock at the heart of it.

Angela Bennett is a shy and awkward computer analyst, whose life is largely confined to being indoors and debugging viruses in games and usually software of some sort. 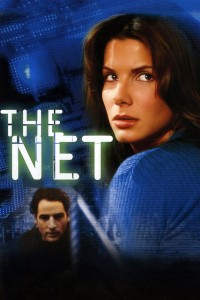 Her whole existence is through the Internet, where she is a talented worker and voracious scourer. One day, Angela is sent a piece of software that strangely allows her to access covert files. Thinking it is just another glitch as she has seen countless of them before, she doesn’t pay a lot of thought to it. Meanwhile, the man who sent her the disc is killed after something causes his plane to crash. Angela, has taken a small vacation to Mexico, as it is her first holiday in over two years and something of a break from her sheltered and self-imposed isolation. While there, she meets the rakish Jack Devlin, who takes an interest in her that she finds flattering due to her mousiness. He is in fact a contract killer dispatched to retrieve the disc that she shouldn’t have seen and kill her before she can alert anyone. Devlin works for a very mysterious organisation who want the disc so they can use it for their shifty and alarming means. After seducing her as well as swiping her photo identification, he attempts to go ahead with his plan to kill her. Thankfully, Angela becomes wise that there is something not right and flees before can kill her.

Upon returning to America, Angela is shocked to discover that all records of her existence have been erased. To top this revelation off, the sinister powers that are tracking her have replaced her files with evidence that points to her being a known criminal. She soon has both the police and shady Devlin in pursuit of her as she attempts to outrun them. Desperate to reclaim her life and bring down the people responsible for this, Angela must use all her ability and decisiveness to uncover just what these cyber criminals want and why the disc is of such importance to them.

The Net attempts to emulate the Hitchcock staple of the innocent person caught up in something unexpected and I must say, Irwin Winkler does a credible enough job in getting that vibe across. Not saying that this film is anywhere near the iconic nature and mastery of Hitchcock, but it’s a decent enough stab. While some of the computer technology depicted in The Net is obviously dated, the message of being careful and how easy it can be to stumble onto something much darker than you thought comes through clearly. And if anything, it sort of rings with a timely essence as now the digital age is in full flow, strangely predicted to a certain degree in this film.

From the constant quick cuts of computer jargon and membranes, stylistically The Net is very good at pulling you in to its world of all things cyber and dangerous. If anything sort of lets the movie down it is the pace; at the start it is a little slow to get going, before eventually kicking into a thriller. But even then, some plot points are skated over a bit and fall to the background because the film then goes a bit crazy on the speed. And it must be said that a lot of the film is pretty predictable( you can tell straight off the bat that Northam is a wrong un from the get go), and yet I was still very entertained for reasons I will speak of next. The breathless action at least in part offers a distraction from the seen it all elements there, constituting some tense scenes of Angela being pursued and doing everything she can to survive along with a cool scene of her showing her mettle and playing them at their own game. A nifty score of unraveling beats and ominous intentions keeps the film largely entertaining as a slice of techno thriller.

Sandra Bullock is the glue that holds The Net together. Her infinite charisma and relatability stand her in good stead when playing the coltish heroine on the run. 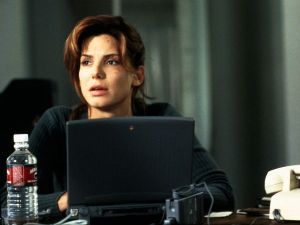 The vibrant Bullock has enough range and appeal to be convincing in the part and the movie’s best asset. She projects an intelligence and ordinariness that I think many people will find endearing, and I certainly found it just that. I mean how can you not like Sandra Bullock? She’s a bundle of talent and she is a strong part of this movie that keeps you glued, even when it gets over the top. Jeremy Northam represents the main villain contingent as a James Bond style assassin, only if 007 was bad to the bone. Northam does good work with the material he is given, though the shortage of meat on his character noticeably affects his work, even with him on charming form. Dennis Miller fares very well as Angela’s only ally who is at first bewildered by everything and then comes around to her ideas of corruption and conspiracy.

So it isn’t going to win any awards, but to pass the time The Net is pretty slick and tense, even if it has an air of predictability hovering over it.