A film that manages to bridge the gap between horror and comedy and a successful one at that, The Lost Boys is an inventive and irreverent movie that has a good few twists and outrageous moments to add to the vampire mix.

Teenager Michael and his younger brother Sam relocate from Phoenix to the beach side Californian town of Santa Carla with their mother Lucy, following her divorce. 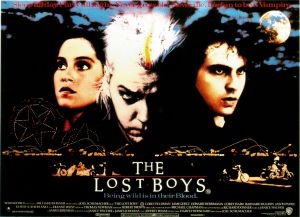 They move in with Lucy’s father, whose an eccentric man living on the outskirts of town. Exploring the Boardwalk, which is where everyone seems to go, (while their mother gets a job at the video store working for a quiet guy named Max), Michael and Sam both discover different things. Michael becomes curious and drawn to Star; a seductive young woman. She runs with a local gang of leather glad troublemakers headed by the charismatic David. David beckons Michael to join his and taunts him into an initiation that soon proves very dark for him. Meanwhile, Sam meets

Edgar and Alan Frog, brothers who work in a comic store and speak of the town being overrun by vampires, which Sam sniggers at as being impossible. It soon becomes very apparent that David’s gang are not just teenagers but in fact savage vampires, who are probably behind all the cases of missing people around the town. Michael, who went through the initiation process without really knowing what it was, soon begins exhibiting strange powers and abilities that slowly take over. Sam notices this change within his brother and . Star is in fact in the same position of Michael as she isn’t a full vampire yet and wants to be rid of it. Worrying for his brother, Sam enlists the Frog Brothers in a fight to eradicate the vampires and save Michael and Star from the clutches eternal, blood-sucking life.

Joel Schumacher directs The Lost Boys with a clear control over it and a sense of fun that emerges throughout it. He wisely gets the humour and horror to both be effective, instead of a seesaw of up and down switches.  His flourishes of style are apparent yet don’t swallow the story. The best instance is the shots from the vampire’s perspective as they fly over the town, which is both creepy and exciting. As far as humour goes, The Lost Boys has it in abundance and forms a marvellous balance with tense horror within the tale. It captures both horror and laughs in quick succession, making sure you’re scared one minute and then laughing the next. The pace is very impressive as it introduces us to the characters and hints of weirdness, letting the darkness sink in as the presence of David and his gang becomes more known. I particularly enjoy the presentation of vampirism here as it has traditional elements, but boasts quite a few surprises in it. The vampires here are shown as seemingly cool and dangerous, the type of popular gang it would be easy to fall into. Yet once the vicious truth of them is known, they take on a different meaning altogether. This is twinned with a theme of peer pressure as Michael is shown to want to be one of the, but comes to see that it’s a living hell from which he needs to escape. David and his gang become the dark forces taking away the innocence of Michael with their powerful and unusual ways.

The Lost Boys can also be seen as a teen movie due to this examination of adolescence, but thankfully it’s one of the better ones due to the main touches of horror and humour. And I must gives kudos to The Lost Boys for its absolute blast of a final act. The extended climax in which Sam and The Frog Brothers face off against the vampires is as creepy as it is exhilarating. And you have to love a horror movie that has inventive deaths aplenty, including death by stereo. In terms of visual style, one can view the movie as a great time capsule back to the 1980’s. The slick and glossy nature is still there, with the vampire lair a cool retreat that looks like something made for MTV. There is fun to be had in looking at the setting and style on show, in between the outrageous comedy and creepy shenanigans. A quintessential soundtrack of mostly 80’s songs does a great job by cutting the action to these grooves, including a great version of ‘People are Strange’ that opens the film and sets the foreboding tone.

A cool cast excellently does a good job in this horror flick. Jason Patrick has the required attitude and cool factor to play Michael, who soon becomes a victim of the vampires. 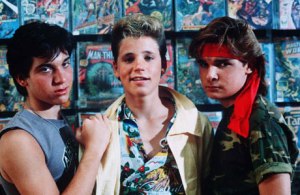 Corey Haim hits the right notes of youthful enthusiasm and brotherly concern as Sam fights to stop his brother becoming a full-on vampire. Kiefer Sutherland is one of the best things in the film. His performance as leader of the vampire pack David, is unnerving yet darkly charismatic. David is a character who embodies darkness from every angle but who you can’t help but feel intrigued by. A lot of this comes down to Sutherland’s good work that makes creatures of the night seem very cool. The duo of Corey Feldman and Jamison Newlander as The Frog Brothers is inspired. These characters are geeky and amusing in their pursuit of vampires, you just have to here some of the one-liners between the two. It’s impossible not to have fun when these two are on screen doing their thing. Displaying a sensuality that is tempered by a deep-seated terror, Jami Gertz makes an impression as the beautiful half-vampire Star who is tired of the life she leads. Showing maternal anxiety and warmth is Dianne Wiest in the part of the boy’s mother, who doesn’t really know the kind of town she has moved them all into. Edward Herrmann excellently takes the role of the seemingly ordinary Max, who becomes interested in Lucy yet comes under suspicion from Sam and the Frog Brothers. And finally there is Barnard Hughes as the unusual but lovable Grandpa.

A gloriously enjoyable marriage of horror and dark comedy, The Lost Boys is deservedly a cult movie and it’s not at all difficult to decipher why.