A big-hearted and stirring movie that tackles racism and the efforts of someone to expose it, The Help provides a poignant and affecting film, aided by a superb cast of talented actresses.

Aibileen Clark is a black maid for a family in 1963 Jackson, Mississippi, who has endured great hardships but has largely kept her emotions under wraps as being maid is the only thing she knows and the only form of work she has. 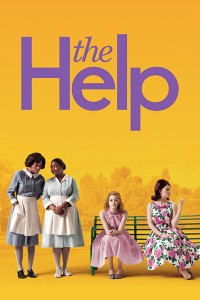 She finds company in her friend and fellow maid Minny Jackson, who is sassy and outspoken in comparison to her, but an excellent cook which is why she finds her employment. A friend of the family Aibileen works for, the young and fresh out of university Eugenia “Skeeter” Phelan returns home to pursue a career in writing. Yet in the social circle that Skeeter finds herself in, headed by the utterly vile and extremely racist Hilly Holbrook, she is something of an odd person, mainly due to the fact that she is more interested in writing than finding a boy to marry. After witnessing the prejudice that the black maids suffer on a daily basis from the white families that employ them, Skeeter finds a story to be discovered and written about. She wishes to write something that shows the feelings and opinions of ‘the help’ and expose what they go through. Determined as ever, she first asks Aibileen her thoughts on being a maid, of which Aibileen is apprehensive as she doesn’t want to lose her job for speaking out of turn. Good-natured Skeeter eventually wins Aibileen around with her persuasive tactics as she genuinely cares about what happens and wishes to make some sort of difference to the shocking treatment of black people. But in the climate of racism and prejudice, they must be careful that no one catches on to their plans, especially Hilly. They also recruit Minny, who has a few stories to tell in typically impudent fashion. Their writing and conversations soon lay the ground work for the book, as they skilfully avoid being caught by meeting in secret and quietly getting the opinions of other maids, who were first skeptical about speaking out. As the writing continues, Skeeter’s resolve strengthens until she won’t stop and with growing confidence and support from both Aibileen and Minny, the book is put in successful motion.

Tate Taylor’s direction is well-appointed and rendered with just the right amount of poignancy, that allows the characters to shine brightly and come alive. He does get a bit sidetracked with trying to sometimes be too light, but his direction is handsomely done all the same. There a few times when The Help misses an opportunity to really present the themes it has with more honesty and they get a bit lost in the whole thing, but by and large, it does a pretty commendable job with at least bringing most of it to the attention of viewers. I would have liked a bit more seriousness at various parts in the film, but the largely touching and inspiring story at least made up for that mishap. 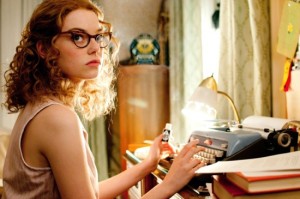 The Help certainly makes for moving and poignant viewing, as we really feel get to know the characters of Aibileen and Minny and are horrified at the treatment they endure by others, simply because of their skin colour. It is pretty staggering that it wasn’t actually that long ago that things like this happened when you think about it, and even today there is still prejudice in places. Some will say that the film is too glossy to have dramatic impact when it does have significantly moving material that sheds a light on determination to overcome racism. If anything, the bright colours throughout The Help, enable it to be a bit ironic as everything on the surface is nice, but the ugly truth of matters is far from it. The music in The Help is quite a contemplative part of it, with a growing emotion and feeling slowly emerging from the quiet.

Emma Stone is extremely appealing as the heroine and thrust of the narrative. Her Skeeter is a girl of understanding and doggedness, who gradually with gumption takes risks in ensuring that the story is told and recognized as a portrait of the hardships the maids have to deal with. Her bright eyes and quick mouth are also put to good use, with Stone getting some feisty one-liners to dispense to the circle of women she knows and all follow Hilly like loyal sheep. If Stone represents the spirit of the piece, Viola Davis is the beating heart of The Help. 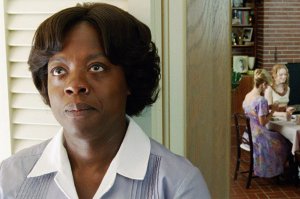 Her dignity, integrity and emotions are all projected with such beauty, poise and humanity that you can’t help but be moved and sympathise with. Her face registers so many feelings that dialogue isn’t needed to understand the hardships she has endured and how she has stoically battled away with grace and hope. Davis is a soulful and powerful performer and her work here is nothing short of amazing from start to finish. On scene-stealing form is an Oscar-winning Octavia Spencer, who is delightfully sassy and direct to the point. Her Minny is a character to root for and Spencer’s wit and depth is given fine voice and freedom as Spencer completely owns a lot of the show with her work. Bryce Dallas Howard savours the role of queen bitch Hilly and plays it to the hilt, becoming one nasty piece of work that you just want her to get exactly what she deserves. She reminds one of a cross between a Stepford Wife and a queen bee from high school, all packaged into a horribly vindictive package and realised well by the talented Howard. Jessica Chastain showcases her immense versatility by playing the ditzy but very personable Celia; an ostracized lady who hires Minny and treats her like any normal person would, in a respectful and kind way that isn’t based on prejudice or fear. Chastain imbues the role with a real naive sweetness, along with a complimentary wealth of sadness that makes you want to hug her. Celia is bullied by the disgusting Hilly who sees her as trashy and immature, when in reality she is a lot more likable, open-minded and mature in outlook than anyone thinks. Good support is provided by Allison Janney as Skeeter’s bossy but ill mother and especially Sissy Spacek as the dotty but amusing mother of Hilly.

So while it could have dug deeper into the issues it presents, The Help still ends up being a pleasing and moving drama about taking a chance and growing with courage in letting your voice be heard.