Based on the classic novel by Jane Austen, Pride & Prejudice is a vibrant and witty version of the source material that brings the themes of misconceptions, social standing and matchmaking into a context that modern viewers can enjoy, but purists can appreciate as well.

In 18th Century England, the Bennet family are part of the Landed Gentry, who whilst not poor by any means are far off being rich. The family comprises of the nervous but determined Mrs Bennett, her eye-rolling and sagacious husband Mr Bennett and their five daughters; beautiful but modest Jane, stubborn and spirited Elizabeth, plain Mary, coquettish Lydia and childlike Kitty . As women can’t inherit property at this time, the house will pass to the nearest male relative, in this case it is a distant cousin Mr Collins. Mrs Bennett has her heart set on marrying her girls to secure their future, but the second eldest Elizabeth is headstrong and not fond of the idea of matrimony. When Mrs Bennet hears that a nearby hall is to be purchased by an eligible bachelor Mr Bingley, she’s sees the opening ball as a perfect way to find suitors for her daughters. 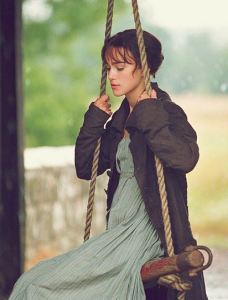 It is here that Elizabeth meets the snobbish but broodingly handsome Mr Darcy, who she takes an immediate dislike to because of his proud nature. While Jane is obviously taken with the kindly Mr Bingley, the spark has been lit between Darcy and Elizabeth, and although neither will admit it, they soon begin to develop feelings for one another. But can a relationship survive because of Darcy’s sullen and proud attitude? And can the waspish Elizabeth truly love a man she has sworn to hate? Watch as this delightful version of the story unfolds with humour and vivacity as morality, romance and family form the backbone to the timeless tale.

Joe Wright, who made quite the debut here, directs Pride & Prejudice with a fluidity that gives the story a constant movement as romance changes between characters and misconceptions are rectified. Yet rather than focus on the quaint beauty that many a period drama centers on, he injects Pride & Prejudice with a modernity, while still retaining the acute social observations of etiquette and manners from Jane Austen’s source. Yes many of the locations used are beautiful, but they don’t overpower the story and this gives this take on the book a much more realistic tone than a romanticized one. A standout scene have to be the confrontation and later exclamation of love between Darcy and Elizabeth, whilst they shelter from the pouring rain.

The chemistry between the two characters is most evident here, and they may quarrel with each other, but we can see that there is passion beneath the surface that is waiting to be released. Also, worth mentioning is the two would be lovers who can’t sleep taking a walk and meeting one another in the misty morning, just as the first rays of the sun emerge. The excellent script allows for humour and drama in a dynamic way that perfectly compliment one another. It also gives us a gallery of interesting characters, all caught up in the machinations of dating and social status. A gentle but urgent score by the talented Dario Marianelli is a beautiful thing to listen to as the gliding rhythms of the piano and strings give voice to the unspoken passions and initial indifference between Elizabeth and Mr Darcy.

Keira Knightley makes for an excellent Elizabeth Bennet, giving her an independence, stubbornness and charm that is a joy to watch. Knightley makes the role her own with her expressive face, witty tongue and glint of playfulness in her eyes. 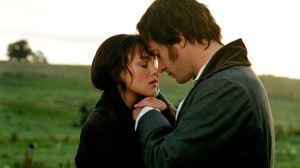 She has great chemistry with Matthew Macfadyen as the two characters lock horns with a mixture of intellect and barbed observations. Macfadyen plays Darcy as a snobbish and sullen bachelor. He gives Darcy an insolence but also a kindness, as we witness his proud state of mind altered and forever changed by the spirited Elizabeth. Brenda Blethyn is a hoot as the caring but highly strung mother who wants all her daughters married, while Donald Sutherland contributes a firm but warm performance as her observant husband. Rosamund Pike makes for a radiant Jane. Carey Mulligan and Jena Malone are funny as two of the younger sisters who flirt and giggle, usually at the most inappropriate times. Tom Hollander is simpering and nervous as a possible suitor and the man who stands to inherit the house, while Simon Woods is charming and polite as Jane’s suitor Mr Bingley. Only appearing briefly but making a scene-stealing impression is Judi Dench as the haughty lady with many opinions on those she deems beneath her. Kelly Reilly is suitably bitchy as Caroline Bingley, who does not approve of the family but Talulah Riley isn’t given enough to do as the plain sister Mary.

A spirited triumph filled with humour and romance, Pride & Prejudice is a handsomely produced period drama with a wide range of appeal, due to its excellent direction, witty screenplay and fine performances.