A 70’s horror with an all-star cast, I was expecting The Sentinel to be a treat. Alas, it was a shoddy mess that descended into ludicrous and incomprehensible places. There are nary any positives in this film, which could have been something special, fur floundered into the abyss of rubbish.

Alison is a young, pretty model living in New York. Though in a relationship with slick lawyer Michael Lerman, she is reluctant to move in with him or consider engagement. She decides to find her own place to live. 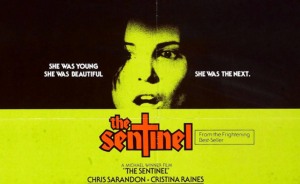 While seemingly living the high life, Alison has baggage in her memories that still haunt her and refuse to let go. Continuing looking for a place, she is recommended by realtor Miss Logan, a beautiful Brooklyn Heights apartment. She notices a man in the top apartment window. Miss Logan informs her that it is Father Halliran, a blind priest who seems to sit there without ever really moving. Thrilled at the scope of the place and the reasonable amount being asked for, Alison moves in. Shortly after arrival, Alison encounters some of the strange tenants of the building, starting with the peculiar and intrusive Charles Chazen. Gradually, Alison’s nights are disturbed by horrific visions of her troubled past that involved an attempted suicide and is plagued by unnerving noises from another apartment. Frightened yet very curious, Alison is then shocked to learn that only she and Father Halliran reside in the complex, with no one having previously occupied it for three years. Becoming more alarmed by events that may or may not be real, Alison crumbles completely. Somehow, she is linked to a centuries old pattern that the apartment block has which poses a deadly and potentially otherworldly trouble. Can Alison really figure out why these visions appear and what sinister designs are being made for her?

Michael Winner gets some atmosphere going at the start, but his lack of taste and frankly trying direction makes The Sentinel really drag and go into a place of boredom.

He plays up the overt sensationalism and outrageous moments to an extent that they aren’t frightening or remotely chilling. The visual style is one positive point( even though it’s sadly only one such instance) finding a certain gloss and at least setting some spooky aura. This however is drowned out by the sheer implausibility and inanity  of it all, that causes The Sentinel to be a major let down. The Sentinel film that could have been something if thought had actually gone into. What we are left with is a confused and histrionic film, that doesn’t generate hardly any terror or resonance. There is one scene that is rightly celebrated for its scare factor, but apart from that, The Sentinel is laughable and deplorable. I mean, I’m game for some campy and melodramatic moments in horror, often they can be quite fun. But the overload, coupled with a dragging, not to mention hard to follow story, was too much for me to take. And there is one thing in The Sentinel that really left a bad taste in my mouth. When all hell breaks loose and the supposed fright of the movie is in swing, one manifestation of evil is depicted as people with prominent deformities. The main thing I took issue with was that the people used were actually deformed themselves. When you put a physical defect or disability on screen, it should be done with respect. Here, it equates the deformities with evil, which really didn’t lie well with me. It felt exploitative and mean-spirited, especially as the implication it made was in very poor taste. The music score is passable with some unusual passages, yet like the rest of The Sentinel, over cooks events to a laughable degree.

As aforementioned, The Sentinel has an unbelievable cast. The sad news is, hardly any of them are given anything to work with and show off their skills.

Cristina Raines, in the lead of tormented model, is basically required to look frightened and pretty. She does both things well enough, but there’s nothing really meaty for her else to do. Chris Sarandon at least tries his best with putting some cocky attitude into the role of the lawyer boyfriend. John Carradine, heavily made up to look older, is pretty effective as the largely silent priest whose eerie presence hangs over the building. Burgess Meredith rocks creepy to the hilt as a pesky and very unusual neighbour, who becomes more than just a common nuisance. Ava Gardner is completely wasted as the realtor of the place, only appearing a handful of times and not equipped with much in the way of action to play. Deborah Raffin is pretty bland as Alison’s best friend, while experienced veteran actor Arthur Kennedy at least contributes some mystery as an enigmatic priest. Eli Wallach and a young Christopher Walken are seen in a thread of the story that makes no sense and wastes the obvious talents of two reliable stars. Martin Balsam and José Ferrer, two fine actors, both appear in blink and you’ll miss it roles which is extremely unfortunate. Sylvia Miles and Beverly D’Angelo certainly have the strangeness down in their parts, but not much else because the script restricts them. Bit parts are also handed to Jeff Goldblum and Jerry Orbach. The mix of old and new stars was supposed to be amazing, but they are never given any time to shine or strut their stuff.

A big mess of a movie that showed potential but quickly became farce, The Sentinel is one to avoid in the horror genre.

Evil Under the Sun

Based on the 1941 book by Agatha Christie, Evil Under the Sun may not be up there with Murder on the Orient Express and Death on the Nile as a spectacular rendering of a classic murder mystery, but it does have its charms along the way thanks to a game cast. 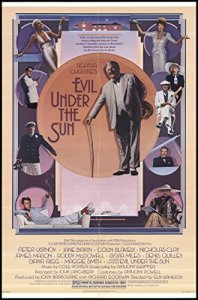 r Horace Blatt, an industrialist in need of his expertise. He concludes that a diamond in the man’s possession is in fact a fake, Blatt believes that his one time mistress Arlena has the real one that could be worth a huge fortune. Poirot agrees to look into the case and travels to an exclusive island resort in the Adriatic, owned by the acerbic Daphne Castle. Arlena is staying at the resort along with her new husband Kenneth and stepdaughter Linda, who she constantly belittles and berates. Also present is Patrick Redfern, a dashing young man with a roving eye, his meek and mousy wife Christine, bickering theatre managers Odell and Myra Gardener, gossip hound Rex Brewster and eventually Sir Horace Blatt himself. Arlena is a stage actress who has a habit of rubbing people up the wrong way with her bitchy behaviour and diva antics. Although married to Kenneth, she rather publicly begins an affair with the handsome Patrick.

Everyone at the resort has some bone to pick with the obnoxious Arlena in one way or another. It is no surprise then to the very observant Poirot that the much hated diva eventually turns up strangled to death on one of the island’s beaches. With an array of suspects who by their own admissions had every reason to kill her, Poirot must deduce who the murderer is among them in order to solve the crime.

If Murder on the Orient Express was the classy and stately affair, and Death on the Nile was the exotic murder mystery, that makes Evil Under the Sun the lighter souffle of the bunch. Whereas the other two Poirot movies succeeded with intrigue, this one sadly falls a little flat in the thrilling mystery department.

That isn’t to say it’s bad in any way, just not as memorable as the ones that came before it. Guy Hamilton has a decent go at directing this and the picture does benefit from a certain humorous edge, but after a while it becomes a bit repetitive. The island location is beautifully rendered and bathed in sun-kissed glory. The costume design is absolutely outrageous, with colours here, there and everywhere. The Cole Porter influenced score adds that dash of excitement, but other ventures in the musical department overdo the tropical setting.

What doesn’t falter in Evil Under the Sun is most of the talented cast assembled for it. Peter Ustinov, returning to the role, brings wise and eccentric charm to the part of Poirot. He is clearly having fun with the part, but brings an amount of gravity to it so it doesn’t slip into ridiculousness. Jane Birkin exudes scared vulnerability and weak-willed manners as the wronged wife Christine, who watches as her husband openly has an affair with the bitchy Arlena.

Nicholas Clay is excellently virile as the muscled Adonis, most of the time seen in the most revealing pair of speedos known to man, whose dalliance with Arlena may have led to her death. Maggie Smith is an utter delight as the cynical hotel owner Daphne, whose sarcastic barbs and witty tongue make her a joy to watch. Roddy McDowall is a hoot as the gossip hungry journalist trying to unearth scandal, while James Mason and Sylvia Miles are wonderful as the constantly arguing couple. Denis Quilley, while slightly underused on occasion, is good enough as Arlena’s put-upon husband. Meanwhile, Colin Blakely injects garrulous humour to the part of Sir Horace Blatt. As the diva who eventually turns up dead, Diana Rigg has an utter blast portraying the glamorous but shallow and cutting bitch. Emily Hone is suitably angry and increasingly resentful as her stepdaughter.

So all in all, Evil Under the Sun isn’t the best adaptation of an Agatha Christie novel to hit the screen. But it has its positives that make it good entertainment for a matinee screening.