A warmly bittersweet film about the last hurrah of legendary comedy duo Laurel and Hardy, Stan & Ollie is a film that invests you with the double act with just how involving, funny and poignant it is.

We begin in 1937 when Laurel and Hardy are at their peak, but even here they are still paid less than the other stars. 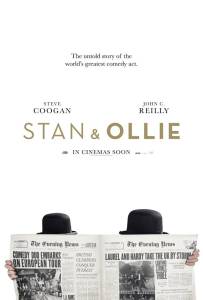 Stan wants to get out of his contract with producer Hal Roach, as he doesn’t feel appreciated by him. Oliver wants to keep things as they are and not rock the boat anymore than it needs to be. This instance will be one that plays an important part later in the film. Fast forward to the 1950’s, neither man is at their height of fame anymore. But each has been persuaded to go on a music hall tour in the United Kingdom. Stan, who is the one behind the jokes and material of the routines, hopes what they ear in money can be used to finance a picture Stan wants to do. Oliver is in bad shape and not really a well man, but agrees to reform again. As they soon discover, it’s hard getting back out there because new talent has come along and captured the imagination of the public. The shows begin with not many people showing up in the audience, which doesn’t go unnoticed. Plus, various issues that have long remained dormant threaten to overshadow the tour and tear apart a friendship. But over time, the old magic comes back and the road looks set for a return to form, aided by the support of two sparring wives . Though spanners are thrown in the works, like Oliver’s failing health and with the history of the two, it could just be one last hurrah for the legends of comedy that are Laurel and Hardy.

Jon S.Baird is clearly crafting an affectionate but also revealing portrait of the legends and boy does he ever deliver. Along with the clever script that deftly mixes humour and pathos from Jeff Pope, Baird really dazzles with his warm-hearted but still bittersweet approach to behind the scenes of the lives of the beloved team. Of particular note is the virtuoso opening sequence in one shot of the team in their prime walking through the backlog of a studio, while they deliberate their contract with the slimy Hal Roach . Once the cameras roll, they are the Laurel and Hardy of legend, but there’s more going on behind the stage. 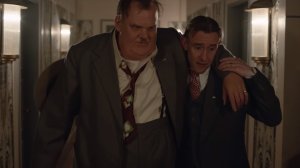 The balance between the two elements of emotion and laughs is held neatly and makes the film flow amazingly. Nowhere is this more apparent than in the public argument between the duo which is filled with personal feelings of anger, but mistaken by onlookers as just part of their humorous act. In fact there are many instances of Stan and Ollie slipping into the public image that everyone knows in order to save face or escape from the harshness of life. The humour mingles with the melancholy and has you glued as Stan and Ollie realise that they need the other, despite buried grievances from the past. Credit must go to the staging, editing and make up, that make both lead actors the image of the great comedic duo. The recreation scenes from the movies of the stars is also a stroke of genius and is so precise and well realised. It leaves you smiling and with a lot of feeling, like all good movies should. A music score that is by turns deep and by others light, perfectly embodies what Stan & Ollie is going for in terms of audience feeling. I must admit in finding any fault with this movie as it was the definition of a fantastic cinema experience.

What really makes this movie soar is the lead work from Steve Coogan and John C. Reilly as Laurel and Hardy.

Both get all the public mannerisms just right, like Hardy’s exasperated facial expressions and Laurel’s passive simpleton tics. It’s really uncanny as Coogan and Reilly have really done their homework and put their all into it. But it’s watching them reveal the behind the scenes nature of each. Coogan splendidly dives into the brains of Stan Laurel( which ironically go against the role of lovable idiot that he was in the public image) and the underlying sadness of someone wanting to succeed, but is also bitter by events of the past. It’s the fantastic mix of humour and emotion that also transfers to John C. Reilly, whose his equal as Oliver Hardy. Reilly has this sunny disposition that’s set against the alternating feeling of fatigue and hope.  The chemistry between the two works beautifully, much like the men they are portraying and paying tribute to. You never doubt for a minute that you’re witnessing two stellar performances that have great nuance. Sometimes with just a look, they say everything they need to. And while they form the centrepiece of Stan & Ollie, two other supporting members of the cast show they are no slouches either. They are Shirley Henderson and Nina Arianda. Both spark off the other as the spouses of the title characters, leading one person to say ‘two double acts for the price of one’. Both ladies are forceful, funny and entertaining in their own ways and they two contribute largely to the film as the supportive but firm wives.  It’s excellent casting all around for Stan & Ollie.

A wonderfully entertaining biopic that manages to sidestep the usual histrionics and over the top nature of the genre, Stan & Ollie weaves a warm picture that is bolstered by the spot on performances of Steve Coogan and John C. Reilly.

Sofia Coppola’s third picture, loosely based on the life of the notorious French queen, is not the average historical drama/biopic we are used to seeing. If it’s cold hard facts you are looking for, turn away now as this takes liberties with history. But if you can accept the film as an MTV style, rock and roll story of a young girl stuck within the alienating boundaries of monarchy and pressure, then you may enjoy this sympathetic, visually sumptuous and ambitious account of the much debated Queen and her life. 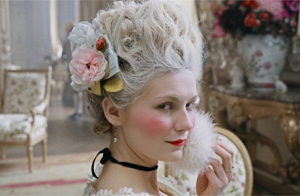 At the beginning of the film the year being 1768, we are introduced to Marie Antoinette. She is the 14-year-old daughter of Empress Maria Theresa of Austria and is charming, beautiful and naive. She is selected by her mother to marry the Dauphin, who will later become King Louis XVI, in an attempt to form an alliance between Austria and France. The young girl travels to France and meets the current king, Louis XV. After her marriage to Louis the Dauphin, who is nervous and not at all intimate with her, she is encouraged by those around her to produce an heir. This proves hard for Marie as there is hardly any passion within her union to Louis.The naive Marie is further alienated by her courtiers for being Austrian and for the fact that she hasn’t produce an heir yet. This leads to her feeling trapped and lonely within the many rules and customs of Versailles that she frequently dismisses as ridiculous . To ease her loneliness, she begins to spend large sums of money on fashion, gambling and throwing lavish parties.  This or so we are led to believe is one of the many reasons that the French people revolted against the monarchy and ultimately led to her downfall.

The first thing to note when watching the film is the visual appeal, which can’t be faulted. Making stunning use of Versailles, we are shown the lavish and equally decadent side to Marie’s lifestyle. Versailles, in the hands of Coppola almost becomes a pre-revolution high school, complete with gossip around every corner and scandal at every door. Differing from the conventional classical music of period pieces, Coppola lets loose with a soundtrack of 70’s and 80’s anthems, the results of which are sometimes interesting and other times intrusive to the narrative. Sofia Coppola’s script paints an interesting portrait of the controversial Marie, this time showing us a misunderstood young girl trapped within her new lifestyle whose choices 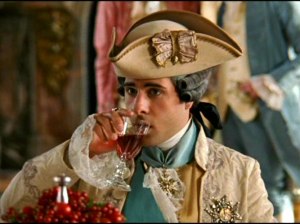 incurred the wrath of many. I personally found this account an interesting one, there also were a few times in which events could have been expanded, but on the whole it was a curious spectacle nonetheless. One thing that can’t be faulted is Kirsten Dunst’s expressive portrayal of the eponymous queen. She captures the skittish, carefree and naive side to her whilst revealing a melancholy uncertainty arising from her loneliness and alienation. Jason Schwartzman is a hoot as Louis XVI who doesn’t often see the attractiveness of his bride and is initially unable to feel intimacy with her. Judy Davis ably stars as the lady in waiting who scolds Marie for her carefree attitude when it co 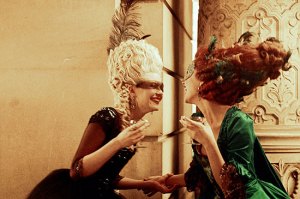 mes to the traditions of the French court. Rose Byrne adds a comedic side to the film as the money spending best friend of Marie who is one of the few people who amuses her in her life. In a brief but memorable role, Marianne Faithfull is icily imperious as the Empress who knows exactly what she wants. Look out for Steve Coogan as a witty diplomat, a stately Rip Torn as the ailing Louis XV and Asia Argento, delightfully sultry as the dishonorable mistress of the king.

I often thing that Marie Antoinette gets a lot of dissent because of its modern ideas and contemporary casting. But if you can handle a slightly revamped film that paints an original portrait of the monarch in question, Sofia Coppola’s ambitious Marie Antoinette may be the film you’re looking for. Yes it may have its flaws, but then again, history lessons where never as interesting and original as this.