The Pride and the Passion

Much castigated in its day, The Pride and the Passion still holds up as a thrilling war/adventure film with an eye-catching cast and top-notch production values. Yes it has its flaws but one can’t help but be swept under the epic spell the film casts under the direction of Stanley Kramer. 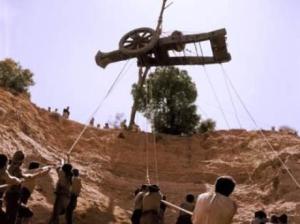 1810, Napoleon’s forces have invaded Spain. A large cannon belonging to the Spanish has been abandoned in the countryside and the French army are searching for it. Captain Anthony Trumbull, of the Royal Navy and Spain’s ally in fighting Napoleon’s forces arrives in Spain to ensure that the cannon is handed to British forces. Expecting to meet another Captain, Anthony is met with Miguel, the leader of a guerrilla band. The two men take an instant dislike to each other. Trumbull wants Miguel to help him shift the large cannon to British forces, Miguel agrees only if the Captain helps make the arduous journey to Avila, which is now occupied by the French with the intent on charging it. Trumbull reluctantly agrees with Miguel and they set off on the long, agonizing journey with the guerrilla band and Juana, Miguel’s seductive lover. Together the band endures harsh weather, enemy attack and pain to ensure the cannon arrives at its destination. Conflict also arises between Miguel and Anthony as Juana begins to fall for the British captain. Prepare for exciting and thrilling viewing as The Pride and the Passion takes you on the perilous journey as the band moves the enormous cannon ever close to Avila.

I think I’ll get the flaws of the film out the way first, as I do believe that the positives outweigh the negatives in this film. Firstly, the film does run for a bit longer than it should, perhaps if it had focused solely on the journey it may have resolved quicker. Also, the main villain a French army commander played by Theodore Bikel is supposed to be threatening but we see so little of him that his presence is rather wasted within the framework of the film. If he had been featured more and given a better story, his character may have been more interesting than he is in the final 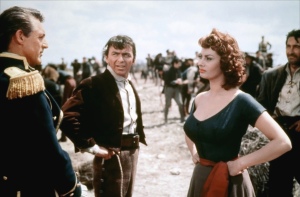 Now onto the positives of the picture. The cast is the major draw of this, especially the central trio. Cary Grant, although it isn’t his best role, manages to inject his law-abiding and buttoned-up character with a charm and wit, that is present in many of his scenes with Frank Sinatra. Much of the criticism of the film centred on Sinatra’s Spanish accent, which although not perfect is quite convincing and not as bad as people make out. Sinatra manages to capture a dynamic and hot-headed edge within his character of Miguel, who although he despises the Captain, he eventually comes to respect him. This conflict is neatly executed as we watch two different men accustomed to different ways eventually realise that they’re not actually that different. Sophia Loren adds sex appeal to her character Juana, and she has sizzling chemistry with both Sinatra and Grant. She is 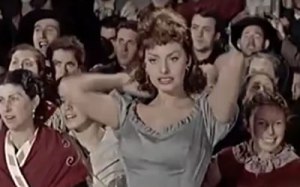 also able to show the deep-seated pain within her character, the reasons why she is risking her life in this daring mission and how she is torn between Miguel and the captain. Perhaps the biggest star of the picture is the production values which are second to none. The luscious cinematography captures the natural beauty of Spain’s countryside and the danger as it is invaded. Many scenes linger in the memory; the raising of the cannon, Juana’s sensual flamenco dance, the perilous journey through enemy quarters and the final battle at Avila. The adventurous music score is unbeatable at conveying the many perils that face the characters as they near Avila. Although not known for directing adventure movies, Stanley Kramer certainly acquits himself well with The Pride and the Passion.

Tense, dramatic and thrilling, The Pride and the Passion may not be the best epic to emerge from Hollywood, but it is certainly worth a look because of its credentials and excellent cast.

Synopsis: At the end of World War II, a New England judge is sent to Nuremberg,Germany to preside over the trial of four men accused of carrying out Nazi crimes.

Judgment at Nuremberg is the riveting, shocking and powerful courtroom drama that presents a fictional account of one of the many Nuremberg trials. Stanley Kramer, who was known and sometimes decried for his so-called message movies, proved that he could direct a film with real meaning and careful handling of an extremely controversial issue with this film that was nominated for eleven Oscars. The film won two, one for Best Actor for the then unknown Schell and one for Abby Mann’s script. As director and also producer Kramer assembled a once in a lifetime cast headed by Spencer Tracy; no matter how big or small the role is in the movie each actor brings something special to the part.

What I liked most about the film was the way in which it presented a controversial issue and didn’t leave out anything important or cover it up. Whereas some courtroom dramas can drag on and become monotonous, Judgment at Nuremberg kept me glued to the screen throughout its lengthy running time.

One of the most important things that drew me into the film was the various performances. For a movie with a starry cast it didn’t relegate anyone to the side lines but let each member give something unique to the film. In

a performance that lasts for around ten minutes, a barely recognizable Judy Garland gives an emotional and heart wrenching weight to the film as Irene Hoffman, a German woman whose friendship with a Jewish man had her imprisoned and him murdered.  The moment, in which she breaks down after being intensely questioned during the proceedings, is sad to watch, one needs only to look at her eyes to see the pain it is causing her.

Montgomery Clift also gives an equally harrowing and poignant performance as Rudolph Peterson; a man considered feeble-minded who was sterilised for this reason by the Nazis. When I viewed the scene in which Clift nervously recounts what happened to him, and vehemently tries to deny that he is not feeble-minded, I was shocked and repulsed at how things such as this could have happened to people.

Another aspect of the film that I found interesting was the clear difference of the two men in charge of the proceedings, the American Colonel Lawson and the German Hans Rolfe. One of them wants every Nazi to pay for what they did while the other says that the men accused were merely following the orders given to them.  This presents an interesting point as there are no easily identifiable bad guys in the film and the proceedings that follow are enthralling because of this.  Both Widmark and Schell are outstanding as polar opposites who often verbally clash during the Trials. Marlene Dietrich is also outstanding and convincing in a role not usually associated with her; her general role was as the femme fatale or the seductive cabaret girl. But in this film she portrays a German widow whose Nazi husband was killed during another trial. I think her character is interesting as she is the flip side of what people saw at the time as the stereotype of German people and she tries to convince Judge Haywood that Germans are not all monsters. Although he doesn’t talk a lot in the film (except his two highly dramatic monologues) Burt Lancaster is amazing and barely recognizable as one of the four men accused of carrying out the atrocities. Star Trek fans should look out for William Shatner in a small early role as a captain.

Nuremberg investigates the theme of national identity. At the time of the film’s release, German’s where not seen in a good light. This is why the character of Madame Bertholt is featured in the film. She is there to show that not all German’s believed in Nazism during the World War.

Identity is also apparent throughout the court proceedings, it is examined in the case of Irene’s friendship with a Jewish man that had tragic and horrific consequences. The court looks at the way in which Jew’s were treated during the Holocaust.

The horror of the Concentration Camps

The main scene that has stayed with me is when Lawson shows real footage from concentration camps as evidence in the court proceedings; it is a haunting and extremely dramatic scene that lives long in the memory.  Up until this point in time, hardly any footage from the Camps had been shown, so one can imagine the audience reaction when the film was shown in 1961.  I remember how shocked I felt when I watched this scene; it was one of those moments where something is so shocking that you must continue watching it. I thought that it was a bold and brave move to feature this footage as the Nuremberg Trials and the Holocaust where issues that needed to be addressed. The film didn’t shy away from dealing with the issue honestly and the results are fantastic and extremely realistic.

The real star though for me is Tracy, he brings a dignity to the character of Judge Haywood wh

o the burden of the case lies on.Tracy brings his usual understated personality to the part and he is the person who is most conflicted throughout the proceedings. In the end the difficult decision falls upon his old and wise shoulders.

Judgment at Nuremberg is a fantastic courtroom drama that deserves to be better known. This film is a prime example of how a drama about a serious issue can still be enthralling and thought-provoking without being boring.