The third Carry On movie, Teacher is probably the one most kid friendly due to the setting but loaded with good humour and a surprisingly moving payoff.

The setting is Maudlin Street School, where the headmaster is a fair, honest man named William Wakefield.

Beloved by the students because of his fair attitude and not wanting to use the cane as punishment, he is well liked and respected by the staff as well. Though while respected, there is some contention about whether more discipline should be introduced, given how naughty the children behave. But after 20 years at the school, Wakefield decides he wants to leave and accept another headmaster post elsewhere. The teachers; bumbling science master Gregory Adams, chirpy gym instructor Sarah Allcock, snide English literature professor Edwin Milton, tough math mistress Grace Short and fussy music maestro Michael Bean, all decide to be as in control as possible when they are told of his plans, though they are worried about what will come next .Coinciding with Wakefield deciding to apply for another post, there is to be a visit from the review his credentials and command within the school by Ministry of Education Inspector Felicity Wheeler and child psychiatrist Alistair Grigg. However, the children of the school have overheard Wakefield’s plans and not wanting to lose their adored headmaster, set about devising a systematic scheme to ensure he won’t be leaving.

The children, headed by ringleader and noted troublemaker Robin Stevens, decide this visit is the perfect time to sabotage any chance of considering or being considered for another post. The pranks and tricks come fast as the students do whatever they can in the hope that stays as their headmaster. Lady-killer Alistair becomes infatuated with Miss Allcock and she reciprocates, while Wakefield has Gregory woo the terse Felicity in the hope it will further his move. It’s left to Wakefield to decide whether to leave the school or stay where he is so obviously wanted.

Gerald Thomas is on sprightly form in this third film, clearly enjoying the mischief and outrageous plans the children execute throughout the movie. There is a laugh a minute feel to Carry On Teacher, especially as you wonder just how far and inventive the next prank will be.

The various tricks employed by the kids, involving spiking tea with alcohol, itching powder and anything to ensure that will not leave are comedy of the highest order . It all culminates in a pretty hysterical scene that takes place during the school’s production of Romeo and Juliet. While I earlier mentioned it was the most kid friendly Carry on film, Teacher still has smattering of innuendo and saucy lines to entertain everyone. From the tearing of Allcock’s shorts in gym to a discussion in English where the pupils purposely ask awkward questions regarding what happens on a wedding night, there’s no shortage of naughtiness, though with still a certain innocence involved . And while the clowning antics and pranks are all fine fun, it’s what is behind them that really makes Carry On Teacher special. The children may be trying to sabotage his perfect record but it’s for a good reason as opposed to just nastiness. Through pranks and various other schemes, it’s all to keep Wakefield as their headmaster. Alongside the humour of it all, there is something very touching to be gleaned from the proceedings. I think that was what made Teacher so far my favourite of the Carry On films; it had what I expected, and then some. The familiar lively score you’d expect from one if these movies is here, along with priceless sound effects that accompany the main slapstick action.

Ted Ray is fine in the lead, making the headteacher someone you can instantly warm to from the first time we meet him. You can see why the students would want him to stay on, because he is fair but not a pushover. Ray though shows that be just as crafty as the children and isn’t above a little fun to do it either. Kenneth Connor, who is fast becoming one of my favourite stars of the franchise, exudes bumbling enthusiasm and comic anxiety here. Pratfalls and mishaps are the name of the game with Connor, and he does them with great aplomb. 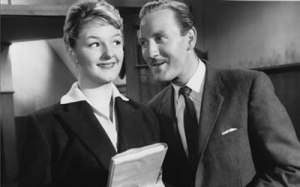 Joan Sims, who is simply delightful, manages to be both upstanding and flirty almost at the same time, particularly when acting alongside Leslie Phillips. Speaking of Phillips, he is right at home essaying a familiar role of charmer and smooth talker of the bunch. Ding Dong indeed, as he’d say. The fun pair of Kenneth Williams and Charles Hawtrey appear as pompous teachers in their respective fields, who are almost always squabbling with each other, something both actors seem to have a ball with doing. The truly make a good duo of comedy and back and forth. Hattie Jacques, with fine comic timing and beady eyes, plays the stern teacher who most favours using punishment as discipline, though she is frequently overruled by everyone else in her views. Rosalind Knight has the haughty, disapproving attitude to pull off her inspector role, that thaws when met with bumbling Kenneth Connor. As the main instigator of pranks, Richard O’Sullivan is suitably mischievous but has his heart in the right place in what he executes.

Carry On Teacher has all the laughs you’d expect from a Carry On, but also boasts a gentle wistfulness and emotion that is surprising but welcome. So far, Carry On Teacher is my favourite.

After the success of Carry On Sergeant, producer Peter Rogers and director Gerald Thomas decided to do a second film( which in turn would lead to countless more movies in the series). They knew they were on to something and delivered comedy gems. Carry On Nurse is a riotously funny spoof of the health service, with more innuendo that would later become prominent and game cast having a blast.

The setting is Haven Hospital, specifically a men’s word that is anything but a haven for those working or recuperating.

The ward is watched over by the overbearing and fearsome Matron, who has the workers scared witless of her and always attempting to not mess up. The trouble is the ward is seemingly a hotbed for every sort of accident or calamity there is, both of the amorous and amusing variety. The motley crew of workers and patients have enough antics to last a lifetime. In the ward there is Bernie Bishop, a boxer who is in after breaking his hand in a bout. The intellectual and always reading Oliver Reckitt complains constantly about the conditions of the place, using his silver tongue to annoy Matron. Bespectacled Humphrey Hinton spends his time laughing hysterically or re-enacting musical orchestra from his perms angle fixed radio. Chain-smoking cynic Percy Hickson is laid up with a broken leg. Recently arrived newspaper man Ted York, who is being treated for appendicitis and who becomes attracted to the gorgeous Nurse Denton. In a private room and constantly a nuisance is the Colonel, an elderly chap who bets on just about anything and causes grief to the nurses whenever he can. Scatter brained Nurse Dawson is repeatedly getting herself into bother, which always seems to occur when Matron is on one of her dreaded rounds. Add to this the cad that is Jack Bell, who wants his operation sorted so he can pursue a romantic rendezvous, and you’re in for a whole heap of trouble.

Gerald Thomas contributes his usual unobtrusive direction that is nothing overtly or stylistically challenging, but has the right tone and tongue in cheek wink to the audience that is delightful.

Innuendo and double entendres enter the fray here and became a staple( one of the best and most memorable being Leslie Phillips uttering the words Ding Dong); here it’s a bit more innocent yet still very suggestive and great entertainment. There’s some amazing sight gags, slapstick elements and just plain old fun to be had as the patients run amok. Carry On Nurse is a finely done medical caper of people wreaking havoc in a place that is usually depicted as somewhat tranquil, with this send up showing hospital can indeed be unlikely fun. You can really see the elements that would later define the Carry On series coming together in Nurse, with amorous and saucy hints thrown into the mix. If you want a lark, just watching some of the sketches here, that will tickle the funny bone.

Look no further than the laughing gas scene of the drunk patients, haphazardly and giggling as they attempt to remove bunion.  that is hysterically executed and a hoot thanks to the outrageous concept and levity of it all. The film has an episodic feel but that’s exactly what its supposed to be. You don’t go into a Carry On for a cohesive plot or to be tested, you go in for the jolly and cheeky ride it provides you with. The jaunty score matches the naughty and laugh-inducing antics of the characters in a madcap way.

Many of the cast from Sergeant make a return, along with some new additions. Kenneth Connor has a scrappy and gleeful kind of attitude that able suits his boxer character. Kenneth Williams is a hoot, particularly in the facial expression and witty line reading department. You simply won’t be able to contain laughing whenever he questions Matron or reacts to yet another jocular incident. Hattie Jacques is suitably formidable and dryly humorous as the Matron, who takes a dim view of how the hospital is being run and isn’t afraid to say it. The role of Matron or authority figure would become a familiar one for Jacques and one she plays wonderfully.

Charles Hawtrey is a riot once more, that s time as a patient whose life revolved around listening to the radio and enacting what he hears. Plus, add his outrageous laugh into the mix and he’s once again a scene stealer. The main romantic sub-plot of Nurse comes from Terence Longdon and Shirley Eaton as patient and nurse. It’s not the finest part of the movie, but is engaging enough in the long run of things thanks to the attractive couple. Curmudgeonly growling can be found with Bill Owen, whose eye-rolling expressions are a joy to view. We get the first appearance of soon to be regular Joan Sims, whose funny, cheeky and clumsy antics as an accident prone nurse are comically endearing and hilariously acted.

Also having a ball is Leslie Phillips; his playboy attitude and comic timing a great addition to the already fit to burst events on screen. Plus, we have him to thank for giving us the memorable Ding Dong catchphrase that would become synonymous with these films. Joan Hickson is straight-laced and by the book as the Sister of the ward, while Wilfrid Hyde-White has an eye-catching role as the troublesome Colonel, keeping the nurses on their toes each and every minute. In a small but plum role, Rosalind Knight is hilarious as an over-eager young nurse who comes onto the night shift and takes the job ridiculously serious.

With Carry On Nurse introducing more naughty humour and slapstick antics, the formula for the franchise comes into focus. And it’s a rollicking good time to be had by all.