After the huge success of GoldenEye, Pierce Brosnan had his second outing as James Bond in Tomorrow Never Dies. It may not be as strong as its predecessor, but it does the job efficiently and has some interesting flourishes to add to the iconic series of 007 movies.

In the thrilling opening, Bond stealthily makes his way through an arms bazaar in order to recover missiles. After an explosive battle, Bond just manages to escape with the missiles in tact. After this, the main focus of the film appears.

Elliot Carver is a prominent media baron, with his finger in every form of the media pie that his eyes can see. Because he has been refused broadcasting rights in China, he decides to cause chaos. He has his team of specialists on a stealth boat destroy a British Navy ship in Chinese Waters, giving him the story he needs and helping set in motion a potential conflict between the nations as he believes the British will blame the Chinese for the attack on them. Carver plans to cause a war between England and China so that he can have the monopoly on the media and satisfy his desire for ultimate power. Worried about the possibility of a full-scale war, M sends Bond to investigate the barbaric and potentially devastating plan of Carver. 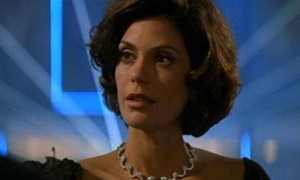 His mission takes him to Hamburg, where Bond is reunited with a former flame, Paris Carver, now the wife of the corrupt Elliot. Bond and Paris had an eventful relationship, but his loyalty to the job got in the way. Bond’s previous relationship with her comes with tragic consequences and Bond soon realizes the extent of Elliot’s plan for media supremacy. With the help of skilled Chinese agent Wai Lin, Bond tails Carver from Saigon to the South China Sea in an attempt to avert an impending war.

Incorporating themes of media manipulation, digital technology and the fact that what lies beneath the surface is very sinister, Tomorrow Never Dies does have an interesting story. But at times it does veer into unpredictability and to be honest Carver’s plan is a little over exaggerated to say the least.

Yet director Roger Spottiswoode manages to keep Tomorrow Never Dies on track and gives this Bond offering action, wit and excitement a plenty. There is a feeling that the movie brings nothing new to the table in terms of originality but this can be forgiven as Tomorrow remains exciting and well-paced throughout. With the theme of digital technology in place, it should be noted the effectiveness of the gadgets supplied by Q. A car that you can drive by using a mock keypad, a bomb triggering watch and a finger print manipulator are all examples of the modernism apparent in this film. Action is adrenaline packed and a standout has to be a chase on motorbike through the crowded streets of Saigon with Bond and Wai Lin handcuffed and forced to rely on one another for direction. David Arnold is on hand to provide an electrifying score of orchestral movements and hints of electronic, to highlight the meeting of the modern and old. Sheryl Crow sings the title song which is a little dull but has a certain slow-burning effect that aids the bizarrely enthralling title sequence of curvaceous girls formed from media circuits and seas of communication data.

Pierce Brosnan gives a great performance as Bond, capturing the suave essence of the spy, the intellect of the man and the physical capabilities in a fight. He also has fun with some very snappy one-liners provided by the witty script. Jonathan Pryce provides an unusual quality to the power mad Elliot Carver, the character may not be the best villain but Pryce certainly makes him watchable. Michelle Yeoh is excellent as Wai Lin, the Chinese agent who reluctantly teams with Bond to take down Carver. 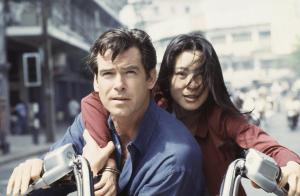 Yeoh showcases her intelligent independence, calm and collected demeanor and athletic prowess in a role that shows she is very much an equal for Bond. It’s great to get a female character who isn’t easily won over by the smooth charm of Bond almost immediately after meeting him and Yeoh gives the part a fiercely independent streak that won’t be easily tamed. Teri Hatcher handles the brief role of Paris well, showing us an unhappy woman still yearning for James who will ultimately pay the price for her desire. Gotz Otto brings physical menace to the role of psychopathic henchman Stamper and Ricky Jay embodies the slimy personality of techno wizard Gupta. Joe Don Baker returns as the fun-loving Jack Wade but isn’t used well enough to be memorable. Vincent Schiavelli makes a brief but highly menacing and unusual cameo as a doctor of death, whose efficiency in his line of work can’t be questioned. Judi Dench is back as M, and this time she definitely means business as we watch her attempt to avert world crisis with her sense of judgement and action. Samantha Bond gets some amusing lines as Moneypenny, while there is an amusing performance from Desmond Llewelyn as loyal Q, who is still asking for his gadgets back in one piece but never seeing this happen. Colin Salmon is good as a fellow agent who helps Bond in the beginning of the film.

It may not be the best of the Bond movies, but Tomorrow Never Dies more than does the job and remains an entertaining spy yarn to enjoy.