The sequel to the highly successful first film, Pirates of the Caribbean ups the ante and continues on a darker but still entertaining path. My heart may belong to The Curse of the Black Pearl because of nostalgia, but this Disney swashbuckler is definitely a very close second with glorious set pieces and pure escapism galore.

Jack Sparrow(Johnny Depp) is on the run from the Navy after his escape in the last movie. 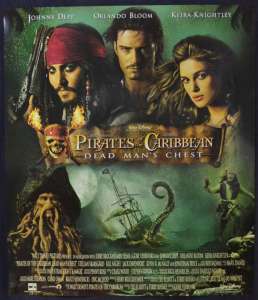 But the Navy is the least of his worries when he is given an ominous piece of news by Bootstrap Bill(Stellan Skarsgård), who is Will Turner’s damned father. Jack owes a debt to the infamous Davy Jones(Bill Nighy); the chilling captain of the Flying Dutchman who has a lot of mystical forces on his side. If he doesn’t pay his debt and become a member of the doomed crew, he’ll be dragged to Davy Jones Locker by the beast known as the Kraken. Meanwhile, lovebirds Elizabeth Swann and Will Turner are set to marry buy on the blessed day, their nuptials are interrupted by the East India Trading Company and they are arrested for helping Jack escape. A warrant is also issued for Commodore Norrington( Jack Davenport), though he is now far from the Navy and a very different person now. The East India Trading Company is headed by the arrogant and conniving Lord Cutler Beckett(Tom Hollander) . This contemptible  weasel tries to strike a deal with Will. If Will can retrieve the magic compass that Jack owns that points to what the use desires, Beckett will pardon him and Elizabeth. The compass would lead to the whereabouts of the Dead Man’s Chest; the heart of Davy Jones that if anyone owns can rule the sea and make others fall under command. 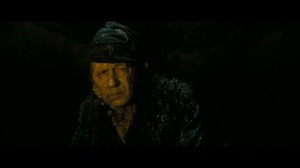 Along the way, Will meets his father and after bonding attempts to save him from eternal damnation. Elizabeth is freed by her father(Jonathan Pryce) and she begins to join the hunt for the Dead Man’s Chest after striking something of a bargain with for information on the whereabouts of her man and what he’s seeking. This is also so she can be reunited with her beloved Will and insure his safety. But this time, something begins to creep up on Elizabeth. A frisson with Jack leads to complex emotions becoming known, which troubles Elizabeth. In between loyalties shifting, an islands of cannibals that captures the main crew at one point, an encounter with swamp dwelling clairvoyant Tia Dalma(Naomie Harris)and meeting with the fearsome Jones, it’s going to be anything but plain sailing for the characters. Soon everyone has their sights on the Dead Man’s Chest for their own personal reasons. Just who will emerge with it?

Gore Verbinski is directing again with great flair for skullduggery and action of the highest order . He isn’t afraid to raise the seriousness as well, while still retaining some of the knockabout charm the audience knows and loves. Dead Man’s Chest feels darker than it’s predecessor The stakes are higher here and it shows in feelings of being epic. There’s quite a bit of brutality and darkness in this film(particularly some of the opening shots of prisoners and their fates), but nothing too grisly as it knows just went to push things and when to leave it up to the viewer’s imagination. As I’ve mentioned, is my favourite of the series, yet Dead Man’s Chest is a very enjoyable sequel with plenty to thrill an audience and that’s why I do hold it in high regard. The length of the film is a smidgeon too long but the sheer amount of action and adventure more than makes up for the long running time. The action set pieces come thick and fast, especially in the last half of Dead Man’s Chest. 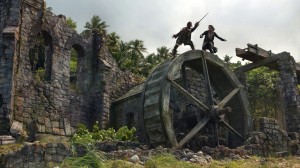 Of particular note is the extended fight for the eponymous chest as all manner of people get their hands on it and lose it in elaborate fashion, Combining humour with breathless action when we see Jack, Will and on a severed wheel from water mill duelling for their lives as it careens through jungle , it’s one hell of a ride on my book. The visuals are of high quality too, crafting many a fine moment of magic. Particularly deserving of the praise is the computer generated design of Davy Jones, who is an amalgamation of sea creatures, most notably having a squid face of innumerable tentacles. The effects make him come to life in very creepy fashion and seem so real, as if he could leap out of the screen in full villainous form. Hans Zimmer takes over score duties and builds on the already impressive atmosphere and then sum. His score thunders along with an epic sweep that pulls you in and is more than a match for the stunning visuals on show.

A game cast is on hand to flesh out this fantasy adventure. Johnny Depp is at head of it as the one and only Jack Sparrow. Depp embodies the sneaky and shifting loyalties of someone used to playing the game. Sparrow is a flawed character as he’s more than happy to sell his friends down the river with a cheeky grin on his face, but Depp evinces the hidden decency that catches up with him.

Only Depp can play Jack Sparrow this way and make it truly work, which is one of the highest compliments I can give him. Orlando Bloom is definitely stepping it up as Will, finally throwing off the shackles of being a holier than thou hero. He’s definitely still got some honour, but it’s fun to see him embrace pirate instinct and action, feeling more dynamic than ever before. Keira Knightley excels once more as the ever evolving Elizabeth, who really shows off her flinty and cunning side on this adventure. Knightley, clearly relishing the chance to partake in more action,  possesses the right balance of determination and confusion when her romantic inclinations begin to go in a way she never imagined. The whole triangle is played out excellently as both have things Elizabeth wants, adding further fuel to the fire in the process. A combination of great animation effects and a fine actor in the form of Bill Nighy craft a ruthless character in Davey Jones.

Created via motion capture and then with the computer generated design overplayed onto the face of Nighy, Jones is a chilling villain with Bill Nighy lending a great deal of presence and impact to it. The effects are very convincing and worthy of praise but it’s the inhabiting of the part that makes it so impressive on the part of Bill Nighy. His distinctive eyes are noticeable through the CGI and the voice he adopts has a real spine-tingling quality; while a certain pathos and glimmers of someone who isn’t all that bad emerges from this. We are also introduced to the mysterious voodoo priestess Tia Dalma, who provides much in the way of intrigue surrounding her knowledge of Davy Jones. Naomie Harris plays the part with an enigmatic grace and knowing playfulness that is most intriguing as the part is a peach. Jack Davenport reappears as the now dissolute and fallen from grace Commodore, who ruined his image and promise by chasing Sparrow. Stellan Skarsgård makes for a welcome addition to the party as the tragic Bootstrap Bill. Hidden behind layers of crustacean make up, his melancholy delivery is surprisingly touching in the long run. Villainy of the human kind is found within Tom Hollander and his portrayal of a ruthless chairman for the East India Trading Company. Constantly belittling others and acting superior, you really start to despise the character. Which in my book shows how good an actor Hollander is to elicit such strong feelings. Lee Arenberg and Mackenzie Crook provide more knockabout humour as the idiotic pirate duo never far from a scrape, while the stalwart abilities of Kevin McNally are on show as the ever faithful Gibbs. Jonathan Pryce, though only in a supporting part, works his talents to make sure that his character isn’t merely throwaway.

With plenty of action, darkness and an upping of stakes, Dead Man’s Chest makes for a compelling sequel of fantasy and adventure on the high seas.