Under the Tuscan Sun

However formulaic and reliant on a tried and tested formula it is, Under the Tuscan Sun boasts an unexpected poignancy and vibrant Diane Lane that make the movie enjoyably warm and involving for the audience to relate to. No new ground is broken, but Under the Tuscan Sun never promises that and it succeeds as a romantic comedy-drama all the same.

Frances Mayes is a San Francisco writer who appears to have a wonderful life.

Yet as the film opens, it is blown apart when she unearths that her husband has been cheating on her. Divorce soon follows for a devastated Frances, who falls into the doldrums and can’t seem to get out of them. Her best friend Patti, a lesbian who has just discovered she is pregnant, worries for her friend yet has a surprise that could help her. She gives her the tickets to a tour of Tuscany hoping her friend will find some comfort there. At first extremely hesitant to take the trip to Tuscany, Frances eventually gives in and decides to go. Once there, she impulsively buys a run down villa after a sign appears to her twice in the same day. She has no idea what made her buy the place, but something about it captures her attention. Realising the place needs a desperate makeover, she employs a band of Polish workers with the help of good-hearted real estate agent Martini, who throughout the film supports Frances with his words of wisdom. 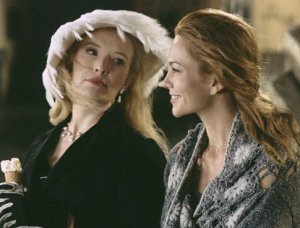 Along the way, she develops friendships with the workers, particularly Pawel, as well as the eccentric British actress Katherine who lives in the moment and the hunky Marcello, who provides sexiness and passion for Frances. Little by little, Frances begins to open up to the possibilities of life and adventure as she immerses herself in another culture and sets about making changes to herself. And even though not every experience she has turns out well, she regains a part of herself that she thought had been lost forever.

Audrey Wells direction is not entirely devoid of the touchstones of the genre, but she memorably invests Under the Tuscan Sun with a healthy sensitivity and emotional core that is successful at bringing out the many moving moments to be found. Wells also wrote the screenplay which also displays her talent for finding depth among the laughs and colourful characters. As I said, some of the film definitely belongs in the formulaic camp but there are a wealth of moments that delightfully tweak parts of what we usually expect. Take for example the dalliance between Frances and Marcello that at first looks as if it’s going to lead to love(as we’ve seen in God knows how many movies), yet decides to take another unpredictable path we might not have seen coming.

Little touches such as this from Audrey Wells script and direction that don’t play to the usual rules give another sense of curiosity and difference to be discovered in Under the Tuscan Sun. It must be stated that the location work in this flick is sublime, and creates Tuscany as a breathtaking paradise. Clothed in a glowing passion and warmth, the countryside and other locales are dazzling and good enough to eat. I have a fondness for Italian things so that’s probably one reason why Under the Tuscan Sun appealed to me so much, as well as a sprightly score.

By by far one of the best assets in Under the Tuscan Sun is the effervescent Diane Lane.

One thing about her that has impressed me since the first time I saw her was Diane Lane’s exemplary gift for getting the audience to feel empathy for the characters she portrays. It’s a wonderful talent that she possesses and it never feels phony or contrived. Charting Frances’ slowly building strength to reclaim excitement and enjoyment in life after being left broken, Lane is splendidly moving, funny and thoroughly on point throughout. Sandra Oh supplies the sly humour as Patti, who comes to visit her friend with her usual witty rapport. A splendid Lindsay Duncan sashays onto the screen as the adventure loving Katherine, who has a taste for danger and younger men. Duncan revels in the wonderful supporting role of snappy dialogue and seductive allure of an old-fashioned movie star. Raoul Bova is on hand for the smoldering love interest and is more than adept at playing the handsome possible lover for Frances. The role isn’t one that shows off a lot of acting talent but it’s layered with charisma nonetheless. A warm turn from Vincent Riotta as the well-mannered estate agent who becomes something of a romantic anchor for Frances is nicely observed, while Pawel Szajda has a youthful enthusiasm in his role.

Engaging and given added depth by Diane Lane’s soulful performance, Under the Tuscan Sun is a delightful film that has the clichés you’d expect but laced with enough different and sometimes unexpected touches to stop it from tipping into an unbearable exercise. And with the stunning locales to look over and laughs( mixed in with sincere emotion), what more can you ask for in a romantic drama?